I want my IQP

Back in November I wrote about Isolated Queen's Pawns and how I generally preferred to play against them than with them.

Various club mates joined'Dave' from the comments box to the original post in suggesting that Baburin's Winning Pawn Structures would be a useful study guide if I really wanted to get to grips with IQP set-ups. Young Martin Smith generously loaned me his copy and I've been slowly working through it for several weeks now.

The first half of the book lays out the advantages of having the IQP with each chapter dedicated to a particular theme. The third for example shows how the posession of such a pawn can facilitate a kingside attack by means of a rook lift. It includes the game from which the following position was taken. 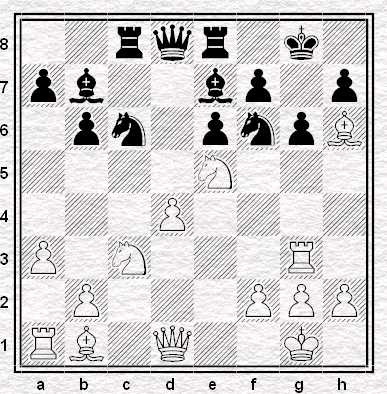 Happily the White side of the contest was taken by a prominent former S&BCCer. He has just chased an enemy knight back to c6. His IQP is under pressure but in exchange he has a large number of pieces pointing at Black's king. How to proceed?

Given this is a puzzle position I don't think it's too difficult to guess what the continuation must be. The tricky bit is proving the idea actually works. Sitting at the board during a real game 'this probably does the business' is not really good enough is it?

I think it's the third move that's the real key. Specifically, it's necessary to see in advance why White has to play it and not something that's similar and at first sight looks much more natural.

One final clue ... the position shows White to play his 18th move. He ended up mating Black on move 26.

BTW, the white king is missing.

Oops yes - thanks for pointing that out. See comments box from yesterday's post for a hint at the reason why.

I've been away from my computer all day hence no fix. I'll get to it asap.

PS: both of you have it correct.