The Secret Of My Failure

When it comes to chess, I'm not particularly big on sharing. For instance, the more children who learn about the delights of our game, the more who will beat me in a few seasons time. Ideally, I'd like chess to become increasingly unpopular to the point of vanishing: for therein lies my only real chance of gaining the World Championship.

I don't feel that way about Dinosaur Comics, however. I figure the more popular the comics get, the less chance their author will get dejected and stop writing them. So today I'm particularly happy to share with you a recent installment, since it fittingly enough features chess: 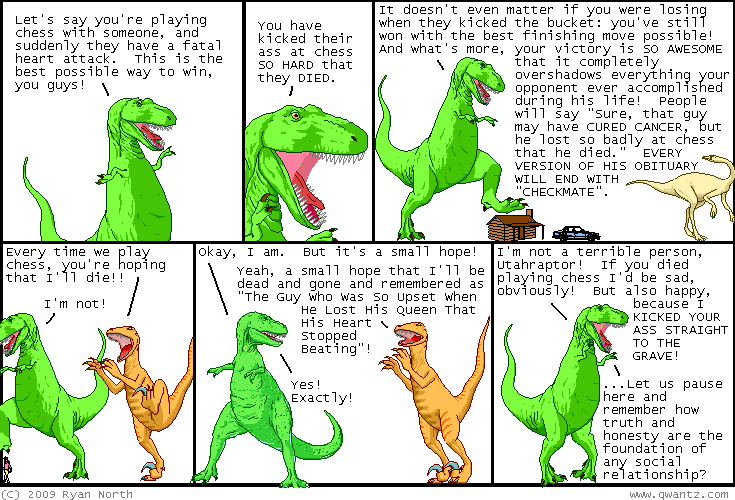 Here's an idea. Perhaps dinosaurs will now become increasingly popular at the expense of chess, and thus in time I will rise to become World Number One! (Number one chess player, that is, not dinosaur.) Yet - regrettably - it is of course possible to like both chess and dinosaurs. Indeed, I used to play online as 'Jurchessic Park' myself. And probably therein lies the secret of my failure.
Posted by Tom Chivers at 10:01 am

I'm all for the airing of one's dirty laundry, but I don't think I'd ever admit to having had the username 'Jurchessic Park'.

In the 1950s or 60s a player in the Surrey League did die when sitting at the board (and taking part in an interclub match). Perhaps suprisingly the game was adjudicated and declared a draw. (Am I just cynical, but I think today it would be much more likely that the opponent would claim a win on time.)

The opponent of the player who died was Graham Smith, for many years secretary of Guildford Chess Club. Apparently this is all documented in the club's minute book.

When we play blitz you see me as the brown one don't you T.C. ?

Utahraptor. Is that a Mormon Dinosaur?!

I paid for this and my son doesn't play it any more because he has "finished" (i.e completed all the lessons). I guess he's retired undefeated at least.