'The most obscure poem is addressed to everybody.' - Jacques Audiberti

'I'm not a junkie, but I like to write like I am one. It's more interesting.' - Robert Pollard

Sometimes I worry that we live in some sort of hellish pop cultural doldrums. It is a concern that I am of the generation that has declared U2's Joshua Tree the second best album ever made. What of the best minds: destroyed by madness, starving hysterical naked?

No. Just as it is counter productive to elevate bores to holy cow status in order to make ourselves feel better, so too is it irresponsible and dishonest to deny that some greats still walk (and create) among us. 'If culture is dead' wrote Ross Woodman in his spendid survey of insanity and romanticism, 'pieces of its rotting corpse still proliferate everywhere we turn, like the body of the dead poet in Adonais'. Jonathan's favourite Jerry Sadowitz is still as foul and perceptive as he was twenty years ago, if not more so; with his last three albums Bob Dylan has shown, once and for all, that he's forgotten how to be boring; and, nestled away in deepest, darkest Ohio, Robert Pollard continues to release over a hundred songs a year, an alarming amount of which are actually very good indeed. 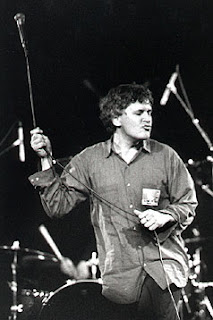 Robert who? For over twenty years Pollard was the lead singer of Guided by Voices. Since splitting the band up on New Year's Eve 2004 he has released a steady stream of albums both under his own name and a variety of demented monikers. Now, in every article ever written on Uncle Bob it is obligatory to mention three very specific things, and in order to bring the uninitiated up to speed I will avoid going against the grain just this once:

1. Pollard is a very prolific artist. At present he has 1138 songs registered with BMI , which goes some way in representing the fifty or so full-length albums he's released as Guided by Voices, Robert Pollard or one of his myriad side projects (Circus Devils, Boston Spaceships, Pscyho and the Birds, Airport 5 and Lexo and the Leapers, to name but five). He is also a successful collage artist and recently published a selection of his work as Town of Mirrors: The Reassembled Imagery of Robert Pollard.

2. As with anybody worth hero-worshipping (or indeed knowing), Pollard drinks voraciously. Alcohol is an occasional theme in his songs ('Drinker's Peace', 'Sister I Need Wine', 'The Drinking Jim Crow', 'How's My Drinking?', 'Whiskey Ships') but mostly Bob's love of the bottle manifests itself in live performance, when he is prone to 'slam' Miller and tequilla and speak his mind about fellow musicians. 'Rolling Stone sucks!' he told one audience. 'They can blow me forever! I tell you what, they've got the Top 100 Living Guitar Players in Rock and Roll and they've got Joan Jett, and they've got both guitar players from Radiohead. What? Those motherfuckers have never played a good fucking riff in their life!' 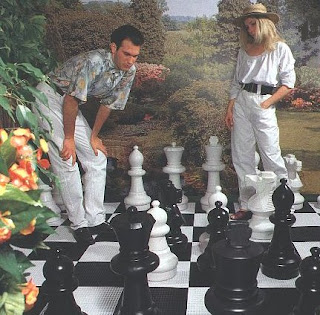 Obligatory chess picture
3. Up until the mid nineties Pollard was still a fourth grade teacher. Again, references to this other life can be seen scattered throughout GBV ouevre: 1993's 'Big School' is an obvious example. But permeating much of the early material, too, is a childlike delight in the fantastical: songs about robots, kicking elves and warlocks riding roosters abound. Pollard's long teaching career perhaps also explains his propensity to address his audience, even now, as 'kids', as well as his implied belief that songwriting is a 9-to-5 job.

Oh gawd, this is a chess blog innit? I don't even like chess! What am I doing here? The point, I think, is that if an artist in any field produces a lot of work and persists in mystifying its content, then a few home truths are bound to accidentally slip out. As far as I am aware Robert Pollard has not the slightest interest in chess (who can blame him?) but all the same if we try hard enough then we can we utilise the universality of his words for our own nefarious ends. What briefly follows below, then, are the first three installments of Pollardisms that just about pass as chess axioms:

'I know this party hat
I know this crown:
I believe that the study of ratings
brings the honest man down'

'Whether or not you see the move
distance discovers patterns
Coming up close
but far away...'

'We went to vicious places
of dark and punished faces

Couldn't shake it
or outgrow it

Swung hells get open now
Don't we know it
'cause with my second guessing
the subject for the testing:
Look over our blunders
Our two fisted wonders...'


There's plenty more where this came from. Don't worry, Jonathan's back tomorrow.

So, are the best minds of our generation (a) destroyed by madness (b) destroyed by something else and if so what (c) not destroyed at all (d) only slightly above average in the first place?

Did I mention I realised, after writing about Bobby Fischer on here after his death, that I realised I should have used Ginsberg's line as the title?

Jonathan isn't back tomorrow is he? I thought I was Friday this week.

I was very surprised to find a post about Robert Pollard on this blog! He's my favorite songwriter.

(Like a whirling dervish spinning round) The centre cannot hold is also a lyric in New Model Army's increasingly relevant song Here Comes The War.
Andrew

The obligatory chess picture has the chessboard set up incorrectly. That seems unlikely so maybe this print is from a reversed negative like the one of Lasker in the Manual of Chess?