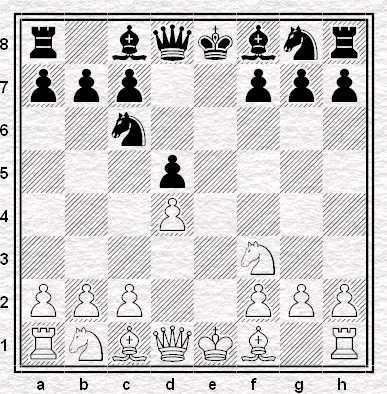 Yesterday's position, as we found out in the comments box, derived from a French Exchange that began,

Previously I'd always followed Nigel Short's example and played 4. ... Bg4 here but inspired by my pre-Christmas purchase of The Flexible French I gave the knight move a punt recently and it turned out very well indeed.

Chapter Twelve of Viktor Moskalenko's book is dedicated to the analysis of a game that starts from today's position. The Ukranian GM writes,

"The symmetry with 2. exd5 exd5 never guarantees White a quiet life, but this is only possible if you learn to play in 'kung fu' fashion with black." (sic)

Now I like the move but I'm not too proud to say I don't get the point Mosky is trying to make. Why does developing the queen's knight turn the game into a "Kung Fu Fight"?

Can anybody out there explain?
Posted by Jonathan B at 9:18 am

Perhaps because if both players moved their C pawn one square the game would be even more tedious than it already is.

That's a non sequiter isn't it?

Maybe black is supposed to shout and slam the piece down as he makes the move.

By the way, does anyone agree that David Carradine is the greatest method actor of all time? Still in character 30 years after Kung Fu wrapped.

It's usually White who slams the move down when he plays 3.exd5, just to show he's really quite aggressive even though he's played the most insipid move...