Who do you believe - me or the computer?

After I lost the game which was the subject of Tuesday's column - and during it - I assumed that it had followed the trajectory my games habitually follow, to wit that a good opening had led to a promising middlegame, which I had then thrown away, as I usually do, in a tactical skirmish.

I was surprised, therefore, to look at the game with Rybka and find that in the early middlegame, before the aforesaid tactical skirmish (in which I did indeed throw the game away) it liked White's position a good deal more than it liked mine. 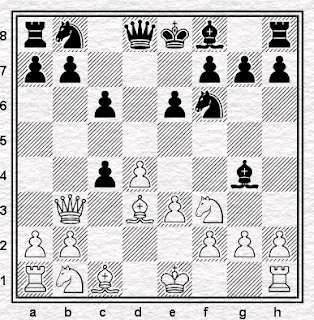 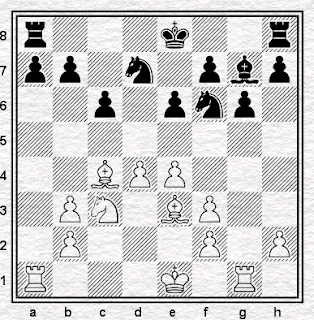 As I say, I was rather expecting Rybka to show, if anything, a small advantage to Black for most of the play given above and I was surprised - almost offended - to discover the opposite. Rybka likes White's position a lot: for example, in the diagram position after 13.Be3, it swiftly shows a White edge of more than +0.80, and at 17-ply it's still as high as +0.77, indicating that Black is really up against it.

Now I'm not tied to computer assessments. There's not much point in observing that, say, Fritz gives +0.47 for White, if you don't know why this is: nor is that +0.47 line necessarily better than another one which is given as +0.15, just because the computer thinks it is. Programs possess algorithms, not the mind of God.

Nevertheless, I've learned to respect these assessments, especially if you can't in the short term find a line which causes the computer to revise them. Certainly I'd be unhappy to play against that 0.77 in a correspondence game, even if I couldn't see how it was going to increase, let alone that it would lead to a win for White.

Still, during and immediately after the game I held a completely different view and I suspect I would take the same approach to a similar position if it occurred in another game. I thought White was jumbled up, lacking mobility, obstructed by his own pawns, while Black, notwithstanding his lack of space, had a more harmonious set-up, with time to organise a break (as he duly did). I don't suppose my play was anywhere close to optimal - nor my opponent's - but was I really so wrong in my assessment?

Perhaps. Perhaps I was misled by my relative familiarity with Slav positions, and hence felt comfortable even though strictly speaking and objectively, I should not have.

Perhaps I have a certain stylistic preference for certain sorts of positions, playing for a break against a possibly overloaded centre, which seem to me more attractive than they really are. (I recall watching live this encounter - also in the Slav - and seeing Black get pasted despite White's adoption of a set-up that I found, impressionistically, unappealing.)

Perhaps I was misled by the chessplayer's natural optimism that derives from the fact that we make our moves (the process Rowson terms Narrative) and hence we naturally see ourselves as in command of the game - while the opponents merely respond, as best they can, to our initiative.

Or, perhaps, I was just suffering from the typical response "he's gone wrong so I must be better" that occurs when the opponent seems to have missed a tactic (as he had in the first diagram, after 6...dxc4!). This is not at all uncommon in my games, as, even though I say so myself, my knowledge of the opening outlasts that of my opponent rather more often than not. In this instance, I'd had the position after 6.Qb3 before (I'm sure the game is in a comments box somewhere, though I cannot find it now) and had discovered 6...dxc4 with the computer's help when looking through the game afterwards. The opponent was the first to be surprised.

Hence I often think I'm better... because I am better? Except that perhaps I'm not. Perhaps, even when the opponent is surprised, I'm only comfortably equal. I do, after all, have Black. Or perhaps I was better - or I was equal - for a bit, but I subsequently let it slip. It can be hard, without a blunder to crudely make the point, to understand that your position has deteriorated. But of course it happens all the time.

But there is another possibility. Which is that my judgement is right and the computer's is wrong and that the position was, in fact, perfectly OK for Black. I don't think I was so far out in my assessment, not as far as the computer thinks I was at any rate. So I appeal to the court of public opinion, unreliable though it may be. Which side of the board would you prefer? And how far does the computer's assessment affect your choice?

I think that Rybka gives points for both space and bishops both of which were white's earlier in the game. Playing ... c5 is one of black's few active plans and I suppose white should have been better prepared for it.

Fritz often does this to me; I've concluded that I'm not clever enough for it to matter unless it's at least +/-2.

Fritz thinks I was about +1.1 last night in an opposite coloured bish ending a pawn up, though I've no idea how I could've won it.

Do people really spend time in a game thinking "who is better", rather than just "how do I improve my position"?

Do people really spend time in a game thinking "who is better", rather than just "how do I improve my position"?

Well, it's an interesting point, isn't it? In one of Rowson's books he recalls a post mortem between (I think) Peter Wells and Stuart Conquest in which the former said "did you think you were better here?" and the latter replied "I don't have such thoughts during a game, I just try to think of ideas".

Now Rowson's not entirely sure Conquest was being totally serious, but there's certainly something to be said for just trying to find the best move rather than trying to assess the position as if you were doling out Informator symbols, and of these things is that it might help avoid the habit of over-estimating one's own position.

As far the opposite-coloured bishop ending is concerned - you might very well be right and Fritz wrong. I don't trust the computer's judgement in endings at all, unless it's down to a tablebase position: in the course of analysing correspondence games I've seen computers produce the most bizarre misjudgements. I can remember it offering about +3.70 for a line in this game which I could see very well was entirely drawn (rook on h8 and h-pawn against rook). Had I followed its recommendations I would have thrown away a half-point after a year's hard work. So beware!

I seem to remember that Anand once described his thinking during the game as one of increasingly-fine distinctions along the lines of who is better and why. Ie, he looks at a position and goes: "white is better because of X; no, black because of Y" ---- and then repeats with increasingly subtle Xs and Ys, until he converges on the truth (or thereabouts.) I'm sure another top GM has said something similar too, although I certainly don't believe that that kind of thinking is the general rule for all top players.

I do often ask myself who is better and why during play, although the answer is usually (a) wrong or (b) "I dunno".