Will Wright is another generally acknowledged genius of the game world. His first great creation, The Sims, took the ideas of Abraham Maslow about mankind’s 'hierarchy of needs' (food, shelter, security and so on, up to 'peak experiences') and applied them to a game in which users could set the rules for their various characters, and then allow them to go off and interact with each other.

(John Lanchester in the London Review of Books.)

Well, maybe, though to make an unoriginal but not invalid observation, people who are that interested in interacting with each other might prefer to do so in reality rather than through the remote medium of the internet.

I was reading the local paper the other day while in a bar - a bar, of course, is a common environment for interacting with other people, so obviously I was reading the paper in order to avoid it - and came across an item about The Sims 3, which has recently been released (or is due to be released soon, I'm not sure which). I have never played either of the game's two previous versions, but what attracted me to the story was the image below. 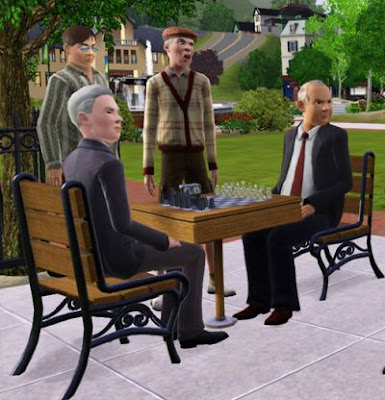 Chess in the park. (In fact, there's more than one table: the picture in the paper showed another one in the direction where the apparently discombobulated figures are all looking.) Well, that looks good. But do they play?

Apparently they do. I was able to track down a couple of images of chess from the previous version of the game. A Queen's Gambit is underway. 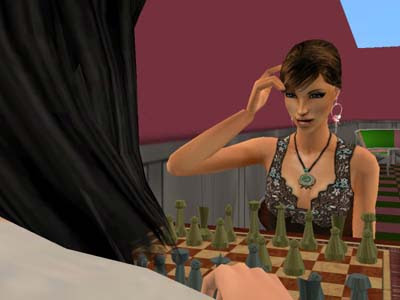 Not that I know anything about it, having (as I said) never played the game, but presumably people like to play a game of chess in their Sims environment because they feel it enhances its reality? Though I'm reminded of an earlier LRB article by Jenny Diski in which she reports on an exchange with the support staff at Linden Lab, who own Second Life:

They invariably answered my question "What is there to do here?" with: "Well, what do you like to do in RL? You can meet people, dance, gamble, date, buy clothes, hang out...whatever you want."

"Because here you can do them better."

Well, maybe again. In the virtual world I can be a much better player than I'll even be in the real world. I can even fool Nigel Short that I'm Bobby Fischer. But whether that's doing chess better than playing face-to-face, I doubt. As for interacting with each other... I doubt that too. More likely you'll be sitting there playing virtual chess on your own. 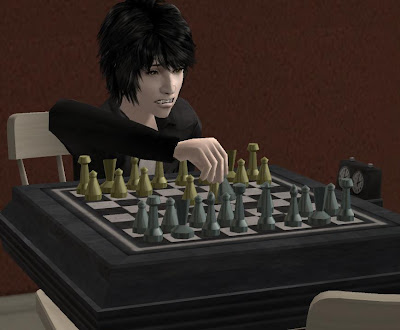 Well at least they seem to have the boards the wrong way around.

I play The Sims 2, and if you watch the chess game the sims are playing, you'll find it's actually a real game. (Specifically, the Fischer-Euwe game in My 60 Memorable Games.)

That would be the last picture, rather than the second one?

So is my assumption wrong, and tou cannot set a character down at a board and have them play a game?