Last Saturday I mentioned that this position, 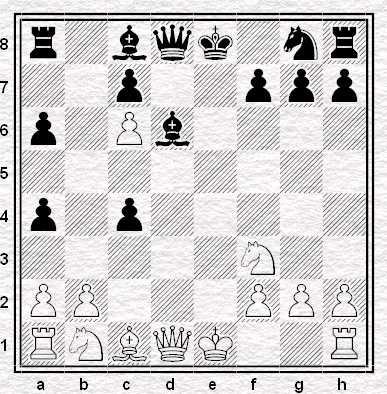 while it may look pug ugly to me has actually been reached by some of the world's best players. Specifically I was thinking of Kasparov - Bareev, from a Paris quickplay tournament in the early 90s.

You could just dismiss this as 'only' a rapid game but around the same time Gazza also punted the Exchange during the Tilburg Grand Master tournament. In fact he played it twice, beating Korchnoi in the second round and having much the better of a draw against Nigel Short in the sixth.

Despite these impressive results it seems that Gazza didn't consider the experiment worth continuing. A few simul games aside I can't find any further examples of Kasparov on the White side of a C01. Shame.

In the comments box to the original TIFE post Angus wrote,

Andrew disagreed but in a manner that implicitly accepted the traditional view of the Exchange French. That is,

"This variation is adopted with a view to obtaining a quick draw...."
Wolfgang Uhlmann, Winning with the French

Perhaps they all have a point but while I know it was just a couple of games and I know it was nearly twenty years ago maybe if Kasparov can use the Exchange to try in win games perhaps we can too?

When it comes down to it isn't the French Exchange, just like any other opening, just as interesting as we choose to make it?
Posted by Jonathan B at 8:20 am

Kasparov used the Exchange French against three French experts each of whom had a pet-line against it. In each case, he found the weakness in that pet-line. He effectively performed three smash-and-grabs, and only failed to beat Short due to a blunder very near the end.

(Although, perhaps in the Bareev game, it would be more accurate to say Kasparov found a way to unbalance the position, so black had the two bishops but the worse pawns, and Kasparov being (a) better prepared and (b) Kasparov, prevailed.)

It's livelier than the Exchange Slav.

having much the better of a draw

This reminds me of when I was a student and people would talk about getting "a good 2:2" or something. What they meant was a 2:2 that was close to the boundary with a 2:1. I could never see how this worked - surely a good 2:2 was one in which you'd obtained precisely the same grade as somebody else despite doing much less work? In other words, rather than being "not quite a 2:1", it was where you had only just scraped in above a Third?

On this argument (which I think I still find convincing today, in so far as I can be arsed to think about it) it was surely Short who had the better of the draw, insofar as despite being roundly out-thought and outplayed by his opponent, he nevertheless walked off with precisely the same half-point as did his opponent.

No I don't think I meant that the French Exchange was boring, just that maximising your chances isn't shameful. Most of my games in the French Exchange have been quite interesting. I also had quite a good game as white in it with some Qf3 stuff. Just realised I had reached the split pawn position a year or two ago at the Barnet congress. Shows how much work I put in on past games!
Andrew

No idea what a 2:2 or 2:1 is! But I agree that a half-point saved feels much better than a half-point tossed.

I don't find the Exchange French especially tedious. Just 2 draws in 17 games, but then I don't draw often anyway.

I think the key to the Exchange French is psychology -- why exactly are you exchanging? It can be good if (a) you have something prepared; or (b) it's your regular line. Bad reasons are (c) you are afraid of your opponent; or (d) you just want something different.

Significantly, I got much worse positions with white than with black... because I always chose the Exchange for reason (d). I've concluded that, for me, when I want something different is the *exact* game that I should just play my usual line. It's a lesson I have to relearn every so often, unfortunately.

I play the French for more than a quarter of a century now. My experience is simple: In the exchange whites throws away any advantage at move 3.
The only real advantage is, that several French players get upset when white continues to play in a very very drawish - and boring position.
Compare positions of the French-Exchange to those from several main lines of the Petroff. You'll find that they are very similar.
The positions of black in the "rock solid" Petroff are even a tiny bit worse (IMHO) compared to the french defense.

Concerníng Kasparovs usage: Kasparov used more of less every minor variation vs the French. The simple reason is, that he - like many other agressive players - had problems with that opening in the main lines. The wins are due to his strength. The opening had nothing to do with it.

My experience is simple: In the exchange whites throws away any advantage at move 3 ...

Concerníng Kasparovs usage ... The wins are due to his strength. The opening had nothing to do with it.

The object of this series has never been to suggest the French exchange leads to an objective advantage for White - I'm quite sure it doesn't.

My aim, on the contrary, has been to counter the idea - all too often assumed I've found - that the French Exchange must inherently (a) be dull and (b) make it impossible for White to win.

The only real advantage is, that several French players get upset when white continues to play in a very very drawish - and boring position

See above for my thoughts on whether the French Exchange need be boring.

As for the statement that "several French players get upset" when White plays the exchange ... well I suspect that's a myth. See IM John Cox's contribution to the comments box in the original post of this series.