While I'm working my way through my Benasque scoresheets to bring you material for this week's postings - coming later, how I should have beaten a 2600+ GM - I'm reminded that the strangest incident of the week, or at least the strangest I witnessed, involved the back of a scoresheet. What was strange about it is that moves are normally recorded on the front. What was also strange is that moves are meant to be recorded. Actually, what was strange about it was pretty much everything.

It was a first round game between the American International Master Marc Esserman and the Spanish player José Manuel Fuertes Romo, a game the IM lost despite being rated five hundred points higher than his opponent. At some point he lost a piece and when I started watching, after about four hours of play, they must have just about reached move sixty.

The scoresheets at Benasque allow for the recording of eighty moves, divided into four columns of twenty moves each. Hence, you will gather, reaching move sixty-one requires the players, who have just completed the third column, to start at the top of the fourth. This, naturally, Fuertes Romo did. Esserman, however, did not. 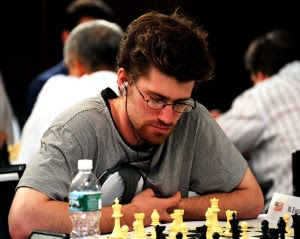 Making his Marc
Instead, he turned over the scoresheet, and made a squiggle at the top of it, somewhere near the middle. When I say a squiggle, I mean a squiggle. I don't mean that the move was badly or even illegibly written: I was standing right behind him and there was plainly no recognisable shape or meaning to the squiggle, nor any intended. I mean that Esserman simply made a squiggle with his pen. My assumption was that he thought his pen might be malfunctioning and he wanted to make sure it still worked.

After he had made a couple of successful squiggles, I expected him to turn the scoresheet back over. He didn't. He carried on squiggling, moving gradually down the page (or, more accurately, the back of the page). Everybody could see that this was going on, except for, apparently, the nearest arbiter (who was close enough to events to collect the scoresheets at the next board, where play finished while this was happening) and possibly his opponent, who either didn't see, or preferred not to be distracted.

I wondered briefly whether the problem was that new scoresheets were required and the arbiters hadn't supplied them: but no, there was Fuertes Romo, working his way down the fourth column of his scoresheet while his f-pawn worked his way towards Esserman's side of the board. Round about move seventy, or squiggle number whatever if you were going by Esserman, White resigned.

It's just possible that Esserman, whose handwriting is even worse than mine - and, unlike mine, quite large, spreading beyond the confines of the fields provided - had a brainstorm and thought that he had reached the end of his scoresheet. (It's also just about possible that he didn't think he had time to call for an arbiter and request a new one.) But if he did think that, it's hard to explain why he didn't look across at his opponent's scoresheet to check, seeing as the Black player didn't seem to have any such problem. It's harder to still to explain why he made no effort at all to record the moves properly. All of this is hard to explain.

Doesn't matter, really, seeing as he lost. But I'd hope he's not done this before. And that he doesn't do it again.

maybe me didn't give a fuck about recording the moves. get a life.

My dear old butch anonymous thing. You seem to be in a bit of a bate.

Far be it for me to interrupt your froth by pointing out that while "me" may or may not have cared about recording the moves "me" was nevertheless obliged to do so.

While we are busy getting lives perhaps you could a little time to learn the rules?