Once was enough V : Vienna Variation 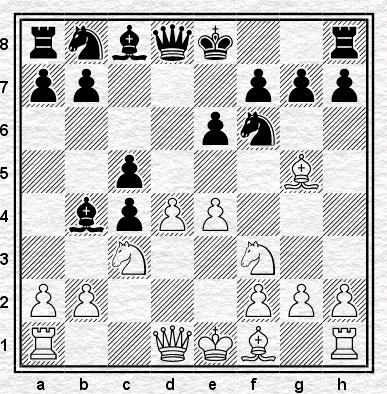 1.d4 d5 2.c4 dxc4 3.Nf3 Nf6 4.Nc3 e6 5.e4 Bb4 6.Bg5 c5
If you know the Vienna Variation, you'll already be thinking, hang on, that's not right: but don't worry, all will be explained. I didn't come across the line by the normal, conventional route of finding it in a book, or in a game I saw: we're coming at this from an unusual angle. So this may involve a lot of diagrams. Bear with me.

If you don't know the Vienna Variation, that's not so surprising: it's not uncommon in grandmaster praxis, but it's one of those openings that club players don't seem to play. I've never yet had it played against me. In fact, I'm pretty sure I've only ever seen it once. Which was the time I played it myself.

WHY I PLAYED IT: At the time, which was early in 1993 or late in 1992 (depending on whether we're discussing when I actually played the line, or when I first analysed it) my choice against 1.d4 was the Queen's Gambit Accepted. Not unusually - for me, or chessplayers in general - I'd developed a problem, not with any of the mainlines, but with an annoying sideline against which I couldn't find any way to play that I was happy with. I don't think, looking back, that there should have been any problem, but that wasn't how it looked to me at the time. This is not so unusual either. 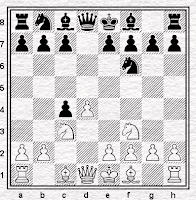 This gives Black quite a lot of options, but nevertheless, I didn't like any of them. 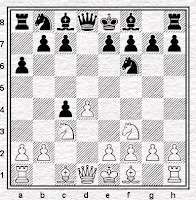 which after 5.e4 b5 resembles the Tolush-Geller Gambit in the Slav (1.d4 d5 2.c4 c6 3.Nf3 Nf6 4.Nc3 dxc4 5.e4 b5) in every respect except that the a-pawn, rather than the c-pawn, has advanced one square. These days I'd probably be happy to take that on, but back then I thought the strong centre and advantage in development were quite a lot in return for a pawn and a draughty queenside.

That said, the reason I'd take this on nowadays is because I play the Slav, so I know a little bit about the Tolush-Geller. But at the time, I didn't, and if I had, obviously I wouldn't have been in the troublesome QGA position in the first place, would I? Similarly, while another option was to transpose into a Slav with 4...c6 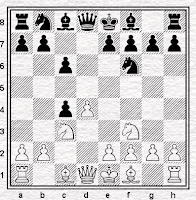 I'd have already moved the c-pawn on move two if I'd wanted to do that. So that was out. Why learn a whole new opening just to deal with an annoying move-order?

But there was another, pure-QGA alternative, that was being played quite a lot at the time, not least by Yasser Seirawan (and, I think, by Judit Polgar). This was 4...c5 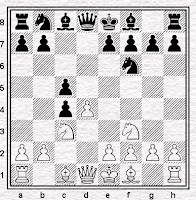 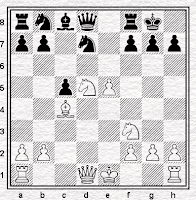 led to a position that might well be tenable for Black. But it looked like a something of a struggle, and a joyless one at that. It still does.

As it happens, there was another transposition available, but one which may have escaped me at the time. I certainly knew about it a few years later, though, when among the multiplicity of openings I tried out, I included a few Chigorins. There is a transposition to the Chigorin with 4...Nc6 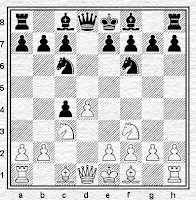 which is the same as the line 1.d4 d5 2.c4 Nc6 3.Nc3 dxc4 4.Nf3 Nf6, and a perfectly viable - and dynamic - line it seems to be. If I had my time again I might well opt for this! But back then it didn't even occur to me. I was stuck with a couple of pure QGA continuations I didn't like and a transposition to a different opening which I didn't want to play.

But then, I started to wonder about 4..e6, which nobody seemed to mention. 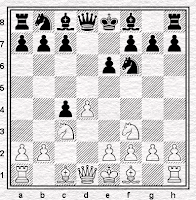 WHERE I FOUND IT: Nowhere. In contrast to some other items in this series, it wasn't a questionable line that I'd found in an unreliable book: it was something that I figured out myself. It didn't appear to be in any of my books, certainly not those I owned on the QGA. Though I'd find out later that it was there all right - but in books, and places, other than the ones where I'd been looking.

It looked playable enough. 5.e3 was obviously a normal QGA with the b1 knight developed earlier than is optimal. 5.Qa4+ didn't look too testing. But 5.e4 was the obvious objection - and presumably, I guessed, the answer to the question that bothered me, why don't any of my books mention this move? I looked at it, though, and played with the pieces a little, and wondered whether Black could try 5...Bb4. 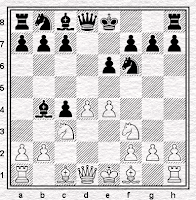 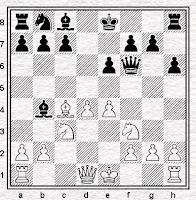 is surely good for White, Black being likely to choke for lack of space. But then I looked at 6...c5. Which brings us to this position 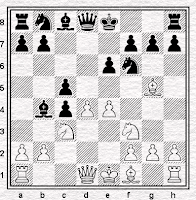 which is the same as the one at the top of the page. Which is a mercy, because we have surely had quite enough diagrams for a while.

The great virtue of 6...c5 seemed to be that it both challenged the pawn centre and allowed the queen to a5, thus escaping the pin, strengthening Black's own pin on the a5-e1 diagonal and even, potentially, attacking the bishop on g5. All in all, this seemed all right for Black. I checked the tactics - using a board and pieces, since this was before computer programs (or rather, it wasn't, but it was some years before I had access to one) and wondered some more why I couldn't find this seemingly-viable variation anywhere. But as it did, indeed, seem viable, I decided to give it a go as soon as the opportunity arose.

This turned out to be in the regional stage of the 1993 HASSRA chess championship - cor, you're thinking - HASSRA being the sports and social organisation for DHSS employees. (Or what had previously been the DHSS, the two departments having, in fact, been split a few years earlier.) I won this competition. In fact, I later won the national championship for which I thereby qualified.

I played it in the final round, needing only a draw with Black to clinch first place, which draw I comfortably achieved. In fact I may still have been winning in the final position, a pawn up, though my play in the last dozen moves had been pretty lacklustre. 20...Nc4! was probably the best of a number of good moves I didn't play, thus allowing an overwhelming position to become less overwhelming. Incidentally, my scorebook gives the implausible 32.Ke1 as the game's last move. I've input 32.Kg3 instead, though I'm not convinced I'd have got the file and the rank wrong. (Maybe he played 32.Ke3, though I rather hope not.)

Which was all very nice. It had all worked out well, as well as I could reasonably have hoped. Excellent. And then I never played it again.

WHY I STOPPED PLAYING IT: I never had another chance, or at least not via the QGA. I played that opening, by my count, another eleven times, over the next five years, which may not seem many, but the queen's pawn was, then as now, rather less popular than the king's pawn. Nobody, though, ever played 4.Nc3 against me again.

I do regret giving up the QGA. In retrospect I don't completely understand why I did - though to tell the truth, most of my decisions from around the end of that decade are hard to understand in retrospect. My penultimate game with the QGA was a splendid win over James Cobb, already then a very strong player - and I won my last game with it, too. So Lord knows why. I wish I'd persisted. I'd have twenty years' experience with it now. (I suspect, actually, that perversely, the relative unpopularity of 1.d4 as opposed to 1.e4 contributed to my making a change, as instead of accumulating the aforesaid experience, I simply had too much time in between 1.d4 games to think about alternatives.) 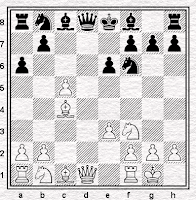 which is, in truth, a pain. But even so, it's perhaps obscure to address that problem in the way that I did, which was to try taking up the Slav instead.

Whether I'd have played 4...e6 again, given the opportunity, I'm not sure. Later, the same year as I played this game, the Karpov-Timman match for the FIDE World Championship took place, and the Vienna Variation came up three times: and looking at those three games it dawned on me that this was actually my line - though deriving not from the Queen's Gambit Accepted, but the Queen's Gambit Declined. 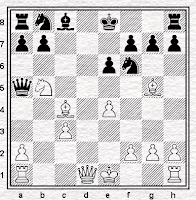 Despite the results, this wasn't necessarily best: according to Khalifman, 10.Nb5 isn't too much of a problem for Black, although he reckons that 10.Bb5+ 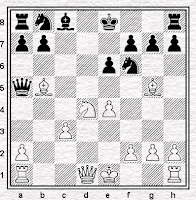 is stronger. Kramnik played it quite recently against Naiditsch in a game he annotated for New In Chess. This may still be the latest theory for all I know, but what exactly the theory was eighteen years before, or even whether Timman's experience put me off the line, I can't remember for sure. (Or, indeed, at all.) I don't know what I'd have done if 4.Nc3 had ever come up again. I do know that it never did.

Neither Karpov, nor Kramnik, nor 10.Bb5+, killed off the Vienna. Not by any manner of means - you may not see it much, if at all, at club level, but among the really good players it continues to come up now and again. Among its occasional friends is the present World Champion, who wasn't afraid to play it in a World Championship match.

But what's that got to do with me now? I've been playing the Slav. All right, I also play the Semi-Slav and I've been known to use the move-order 1.d4 d5 2.c4 e6, which avoids the Slav Exchange but not unusually brings us to the position after 3.Nf3 Nf6 4.Nc3 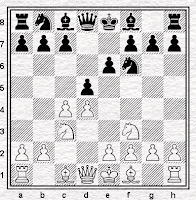 which Black has the options of 4...dxc4 and 4...Bb4, as mentioned above. I play 4...c6 here, but 5.Bg5 isn't just dangerous, it might be the single most theory-ridden variation you can play without opening with the king's pawn. I'll play against 5.e3 all day, but I don't like 5.Bg5 half so much.

So the thought of the Vienna, with the much smaller chance that the opponent may know too much theory, has its attractions. But the thought of starting all over again, and thereby giving up the knowledge and experience I've been acquiring, has fewer. The existence of drawish variations (and there are always drawish variations) is less important, perhaps much less important, than whether you've seen them before and played them before. Perhaps, more than once. Perhaps, less than eighteen years ago.

The problem with using it as a weapon with Black at lower levels is that it's only the sharper players who will punt plans with Bg5. So if you defend 1 d4 with 1 ... d5 you will meet a lot of slow stuff with Nf3, Bf4, e3, b3 with c4 delayed until it isn't en prise. Given this, a player wishing to play sharply with Black against 1 d4 is better off in any choice from the Kings Indian, Benoni/Volga, Gruenfeld, Queens/Nimzo Indian.