Decade upon decade, there is a war being waged in the world of cameras that makes Kasparov v Karpov look like a fleeting squabble between two cuddly old lovers, and that war is Canon versus Nikon. And now just recently camera website LensRental decided to make a chess set out of the respective equipment to illustrate the point: 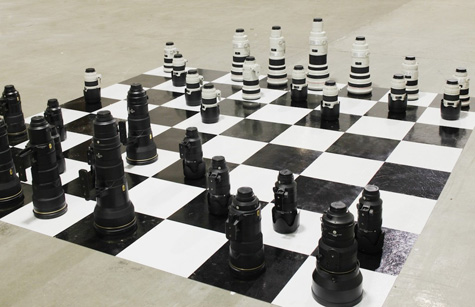 Nice. I have to admit I'm not wholly clear on what's going on in the above position, but according to CanonRumors, "Canon won the game with a Fischer like performance." Not being like Bobby Fischer can only be good news for Nikon.
Here's another photo:

And meanwhile the clever people at fstoppers made a nice animation out of the game, which I hope they won't mind me borrowing:

Thanks go to my wife the photographer Sarah Condry for the tip.
Posted by Tom Chivers at 11:11 am

I misread that as "LensRectal"