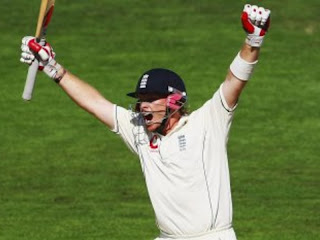 What were you up to yesterday? Me? I was half watching/half listening to the cricket and thus witnessed a world first when Test Match player and alleged adult Ian Bell gave the bigger boys a note from his mum asking whether they'd stop being unkind and let him whack the ball about for a little bit longer. Until now being out has always been considered sufficient grounds for the umpires to actually give you out but Ickle Ian running blubbing to matron has changed all that. This we call the spirit of the game, apparently.

Anyhoo, the point is I would much rather have been third watching/listening to the cricket while devoting the rest of my time to following the British Championships at Sheffield. There being no play on the middle Sunday, however, I ended up spending the day watching Bell score a few runs then stamp his foot and yell about how unfair it all was before getting his own way.

Along with many of our esteemed and valued readers, no doubt, I'm old enough to remember when there used to be no play on Sunday during Test Matches either. Games always started on Thursday and after three days the players took a break and then came back for days four and five on Monday and Tuesday*. In those days practically nothing was open on a Sunday, but then Parliament discovered that allowing people to go to Sainsburys seven days a week would not bring about the end of civilization and it began to dawn on the TCCB (as was) that since the weekend was the time that most people could watch cricket it might be a good idea to sell tickets for both days rather than just one.

So cricket has changed over the years, but the British Chess Championships, it seems, has not. When, I wonder, was the practice of no play on the middle Sunday established? That was how it was at the championships that I attended at Plymouth and Eastbourne in 1989 and 1990, but no doubt it dates back much much further than that. Whatever the answer, I'm sure it was quite appropriate at the time, but is it really still the best way to do things today?

It's not that I object to rest days per se, it's having one on the Sunday that I find strange. There was a comment on the EC Forum a couple of days ago to the effect that the absence of sound on the internet commentary feed on Saturday was particularly unfortunate for the poster because he could only follow the games at the weekend and therefore he wouldn't get to hear any at all throughout the whole fortnight. I'm sure he's not alone

If we want to publicise chess in general and the British Championships in particular, surely the obvious plan is to play the games when people can actually watch them? Why, then, is there no play at the British on the Sunday? 'Because that's how it's always been' is the only answer I can come up with, although, clearly, that's far from a satisfactory reason.

The whole event seems tired and needs an overhaul imo ... I think we can do better.

Agreed and agreed. All the more so since we have a championship worth shouting about this year.

When play resumes this afternoon we have Short - Jones and Adams - Williams amongst much else to look forward to. Good stuff indeed although, the law of sod being in operation, I shall be on a train when it all kicks off and shall probably miss most of it. That's pretty annoying and there's really not much of an upside to my afternoon, but there is one silver lining in that if Iain Bell gets a hurty knee and has to go off to get some Savlon put on it, at least I shall miss that too.


* Unless West Indies were playing in which case the match would have been long since over.

I couldn't agree more about Bell: if anything, I thought he should probably have been ashamed to accept Dhoni's reprieve. (I also don't really understand why Dhoni gave the reprieve after twice refusing to reconsider on the field, or, given those refusals, why Strauss and Flower asked for it.)

Personally I wish the Championships had been put back a fortnight, as I'll be in Sheffield two weeks tomorrow.

Given the huge focus of this article on cricket, it is surprising that JMGB forgets that Sunday sees the long-traditional ECF v local team cricket match played.

My dear old thing, as Blowers might say, I didn't forget it at all. You're right, though, I should have mentioned it, if only to say that I'm not sure that the cricket match tradition should take precedence over what should be the main business of the British Championships.

Leaving to one side Bell’s boundary-side tantrum – although how can you bat so well and pout like that?! – I can see why Dhoni decided to change his mind. By the time the ball was returned to the stumps, it was clear that both sides were treating the ball as dead; it was the last ball of the over; the umpires were preparing to move on; and tea was about to be called. The only thing that needed adjudicating was whether three or four runs had been scored.

Given that Bell wasn’t attempting to take a run, there were no grounds in practice for thinking the ball wasn’t dead. I think if Dhoni had thought his team were actually trying to run out a batsman within the letter and the spirit of the laws then he wouldn’t have retracted his appeal.

As an umpire in the lower echelons of the game, you’re trained to take control of stuff that might become contentious. As the umpires subsequently asked twice if they wanted to reconsider their decision to appeal – this suggests they didn’t think much of it, except as a legally possible shout. A firm call of “TEA” or “OVER” at any time after the fielder picked up the ball at the boundary edge and haphazardly sent it in the direction of the middle would have put an end to this particular beginning.

But if that had happened, would we have seen the pout?

As it happens, the traditional cricket match didn't take place at all.

A point in favour of the middle Sunday's being the rest day: many players in the Championship and Major Open are more masochistic than me and like to use the rest day to play in the mid-tournament Rapidplay, which for obvious reasons is scheduled for the weekend.

(Also, the statistics for international tournaments tend to show that, possibly counterintuitively,
they get more viewers during the week than they do at weekends. Wasting your boss's time is obviously considered better than wasting your own.)

Are we going to reprieve that New Zealand (?) batsman that got flattened by Sidebottom and then ran out btw?

Was glad of the day off the one time I played the British. It would seem too early or late to be not at the weekend and the break is for the players of course. Expect a lot of people are getting paid whilst they watch the British at work anyway so if there was play on Sunday it would take their own time up.
The whole event did seem to go on and on though- 9 days without a day off is probably better although you may see more short draws to generate a day off. It seems a revamp is high on the agenda. Would agree with one reservation that I may never be able to put my disappointing 4.5/11 right (although at £200 entry fee this is an expensive thing to try and put right!).
Andrew

This blog, or instance, gets more hits per day during the week than the weekend.