Chess in Art Postscript: Staring Into The Abyss Postscript

The starting point for this Postscript comes from fellow blogger Tom Chivers. A month or so ago he kindly forwarded to me an exquisitely painted picture that he saw on Mark Weeks’ blog, and Mark saw it at Gandalf's Gallery. I was sure you’d want to see it too. Who’d have thought it: Chess in Art goes viral. 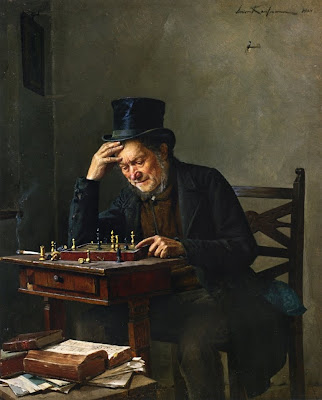 Kaufmann's work is a very fine example of the Staring Into The Abyss sub-genre of Chess-in-Art works, hence this opportunity for a Postscript Postscript. The primary elements are familiar: one player only, a board, and a decent arrangement of pieces. This is the triangular armature essential to Staring Into The Abyss, here presented with a Jewish inflection.

Regarding the pieces: who, following EPTAS: Leeming Plays a Blinder or What Dadd Did, can now resist the urge to count them? We need to know whether or not the artist has done a proper job and painted in a full set.

After Richard Dadd’s jiggery-pokery (in his chess picture, The Child's Problem, he hid a pawn under a walnut shell) we hope we are not going to be misled this time by disguise or camouflage.

Oi vey; is he hiding a piece under his left hand? The schmuck.

And is that a rational position on the board? I can’t make sense of it. Perhaps, if he’s reading this, Leonard Barden could please help us out, as he did with Dadd's picture.

There are some telling anecdotal details on show. That ciggie smouldering on the edge of the table – forgotten while his hand is put to better use soothing his cudgelled brain – appears to be wedged into an ivory cigarette-holder. Perhaps it’s a family heirloom, as the rest of his thread-bare schmutter doesn’t speak of self-indulgence. The room is also spare and down at heel. We are looking at a scene from the shtetl. Kaufmann mines a vein of European Jewish cultural experience not yet fractured by the Shoah.

Some other details are also eye-catching. Look at how Kaufmann has set the board at an angle to the table. Such a subtle misalignment, echoed by the book on the slide, and the teetering top-hat, creates some visual action where otherwise all is paused in concentration.

And that finger picking out a square on the ‘a’ file. It suggests that the fellow is struggling not just with the position, but with chess itself. He needs a physical crutch to help him with his mental stumbling.

We can see also that, for the moment, he has cast aside the book with the problem that gives him so much grief. In fact there’s a whole careless pile, and it speaks volumes for his ambition to elevate learning, culture and our obsessive game above personal affectation. All serious chessers will recognise here their own heap beside their favourite armchair. It could never be replaced, aesthetically anyway, by a Kindle™.

But let's get back to our theme, and the finger. We know from our previous dip into the murky waters of this sub-genre that the solitary player, lacking a human opponent, is pitted instead against another, indomitable, adversary: the unfathomable deep of chess itself, standing in for the mystery of life, the universe and everything.

His digital stab reveals that his grasp of the game is shaky. He is marking out the imagined trajectory of a piece in the forlorn hope that it will conform to his intention. But it is really a sign that betrays another meaning: that he is already defeated, not only chessically, but existentially. His hold on reality is as tenuous as that on his chess. He gingerly taps the board, a pictorial analogue for the thin crust of his sensible world. He is desperate lest it split asunder to reveal the Abyss beneath.

Not surprising, then, that the doomed patzer looks worried.

Note: For more rivetting Kaufmann portraits see Art Inconnu.
And for a spot of artistic reverence, and pale imitation, cop this.
Chess in Art Index
Every Picture Tells A Story Index
Posted by Martin Smith at 11:00 am

As it happens, I came across this picture entirely independently, a few weeks ago. Thinking it was really good, but unable to trace the artist or title, I sent it to Martin only to be surprised to find out that he not only already knew of it, but had prepared this piece!

What a painting it is.