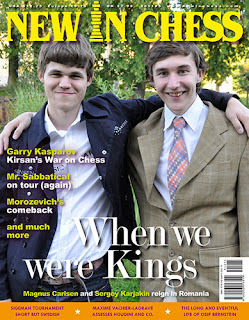 The following email was sent to New in Chess on 20 June. It does not appear in the latest issue, 2011#5.

The Isle of Man tournament of which Nigel Short complains took place eight years ago, and Short has spent much of those eight years going on about it. I was a participant in the tournament and have a rather different view of events than his.

Firstly, everybody seems to have been aware that repairing would take place - everybody, that is, except Short. There is a very good argument, which Short makes, that this should not have been the rule. There is also a very good argument, of which Short takes (and took) no notice, that it was, nevertheless, the rule, and one should not change the rules of a tournament after a tournament has started. Even if the top seed insists otherwise.

Secondly, what attracted criticism about Short's conduct wasn't that people felt he had no case, but the way in which he put that case. It would have been possible simply to disagree, or even to appeal, and then to continue play: in Short's case, this would have entailed playing a game of chess against somebody graded about 500 points below him. Instead, he chose to throw his toys out of the pram, walking out of the tournament when he didn't get his way and subsequently attacking not just the arbiters but anybody who had had the temerity to criticise or disagree with him. (A process which, it seems, continues.) It was not a performance that impressed or endeared him to anybody.

Now we've all behaved unimpressively in our time, the present writer no exception. We've also all felt we were in the right when other people took a different view. But Short didn't seem able to accept that other people see it differently - and eight years on, still doesn't. I wonder whether this insistence, that there is no other valid point of view than his, might help to explain why the other players didn't queue up to agree with him.

I wonder where they got the idea for that headline?!?

As somebody who has given the BCM a bit of a kick in the past, I've got to say that article by John Saunders is really very good indeed. A fearless reasonable, and honest appraisal of a leading player while also very accurately uncovering the reality behind chessbase's claims to be a serious news organisation. (See also their complete absence of any coverage of the claim that Rybka - a product that must make them a fair bit of money - may have been built on plagiarised foundations).