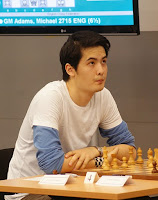 It was "a big day" for the British Championships, our old friend Raymond Keene tweeted on Wednesday morning, and he was right too. Rather than hyperbole, of which his jottings have sometimes been accused in the past, if anything RDK was guilty of severe understatement with that one.

Tuesday 2nd August, 2011: England’s #1 playing England’s #2 and, if we take Luke McShane as semi-retired, England’s #3 active player up against the #4. Our top four all playing each other on the same day? A Halley's Comet of a brace of pairings. Other than the first round of Malc Pein's London Chess Classic of 2009 when did that last happen?

My guess is that you'd have to go most of the way back to Blackpool '71 for anything similar. We got it at Sheffield, though. The best playing the best. Exactly what the British Championship should be, but so rarely is.


Given the standing of those involved, it was rather amusing that the games began as if they were being played by the chessers who occupy the lower boards of your club’s second team. "Wtf?" I potty-mouthed to myself as I watched the Championship website spit out the moves on the live feed. "Have they wired up the boards from the under eleven championship by mistake?" 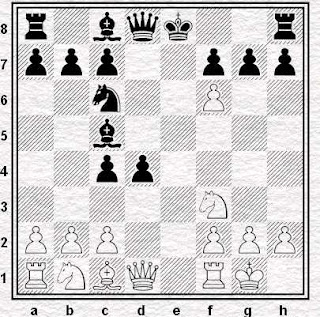 A little tricky for an ECF 160s to defend, perhaps, but surely nothing for a 2700 Grandmaster to worry about? Was Nigel really going to play this again? Was Mickey really scared of it? Since we’re asking questions,


I bet one of aforementioned 2nd team board eights would have tempted.

The book our super GMs spent the rest day reading?

Jones – Howell wasn’t so very different to Nosher - Adams. After, 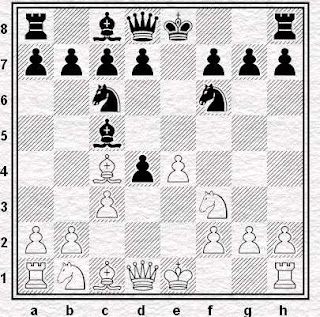 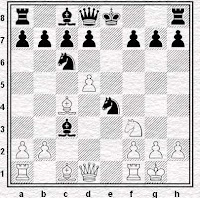 The Corporal preferred the somewhat less juvenile 6 e5 , but that is hardly at the cutting edge of opening theory either, is it?

"What was the opening in Jones-Howell all about?" IM John Cox asked on the EC Forum. "This 5 c3 kinda threw me - no doubt it's all been well-known theory since Greco's time, has it?" I guess if JC was not IM JC but 1600 elo/120 ECF JC he'd probably be a lot more familiar with Jones' choice than he is!

Howell tried 10 ... Ne7 - Mihail Marin suggests ... Bg4 in Beating the Open Games - and went on to lose in 40 moves. Adams, in contrast, eventually managed to draw against Nosher, but only after being on the back foot for much of the game. Aren't these lines supposed to be harmless?

Actually, going back to Short-Adams, I tried to look up the line in Marin and the closest position I could find for comparison was this:- 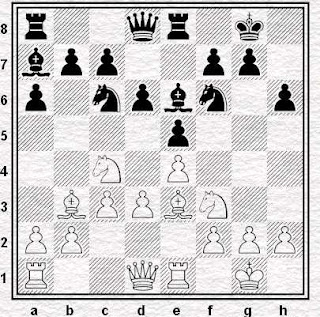 
If White went h2-h3 here the game would transpose to Short-Adams after White's 12th, but would White play 12 h3 in this position? Marin evidently thinks not and doesn't mention it at all. After all, harassing the bishop with ... Ng4 doesn't make sense because White wants to play Be3xa7 anyway and Black's light-squared bish has already landed on e6 so will at least lose time if it came to g4 now. So why does White need to control his king's knight four square at this point?

Kiddie openings that turn out to be surprisingly effective or otherwise, round 8 of Sheffield 2011 was clearly a special day. It's far from obvious that the the financial model and other arrangements for this year's championships will, could or should - I retain my doubts about certain issues - be repeated in the future, but in terms of the British Championships I can't think of a parallel for last Tuesday in my chess lifetime. Hat tips to everyone, not the least of whom, to put it mildly, is CJ de Mooi, who helped bring about the day that big time chess came to town.


Photos of Adams, Short, Howell and Jones taken from the British Championships website
CJ from britishchess.blogspot.com

I'm a touch surprised that John didn't know anything about the Jones-Howell opening, as it's covered in Larry Kaufman's admirable The Chess Opening In Black And White (see pages 314 and 296) which I know John has seen, since he refers to it quite a lot in his equally admirable Berlin book.

Talking of which, I've been tempted to play the Berlin, since it appeals to my negative and joyless style, but among my reservations has been the line 5.d4 Nd6 6.dxe5 Nxb5 7.a4. I've often wondered how John plays against this, and I might have found out when he played the Berlin against Tom Chivers - Tom Chivers of this blog - in a London League match, given that Tom apparently likes the 7.a4 line. Alas, though, Tom saw fit to play something else, and now, perhaps, I shall never know.

Doesn't my admirable book cover 7 a4 in some detail?! It's true White can make a craven draw with 10 exd6 in Polzin-Parker. If you don't like that I suppose 7...d6 is what's required.


Oops. No e5 hitting a knight after 6 Nxd4. That was a bit obvious.