Today we bring our coverage of Sheffield 2011 to a close. So far we've looked at Pert's endgame skills, the epic last round, Houska-Rendle which almost but didn't quite feature an exchange sac, Short and Jones playing kiddie openings against Adams and Howell respectively, the Pert twins' (brief) clash and the rest day question. All of that since our first report four rounds in.

Our subject for this post is the question of the long-standing 11-round swiss format and how suitable it is for the British championship itself. "Not very" was my feeling before Sheffield and nothing happened during the event to make me change my mind. Quite the opposite, actually. 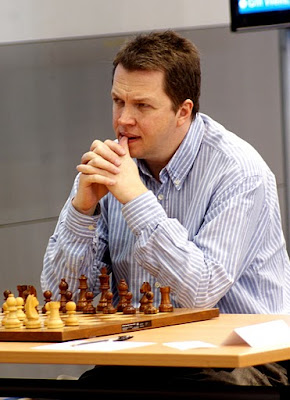 Nosh trying to remember how many GMs he's met recently

Let's start with the positive. Above all else, to be a success Sheffield was going to have to bring the big four together to play each other. Happily that happened and we got Short-Howell and Adams-Jones in round 5; Howell-Adams in round 6;Short-Jones in round 7; and Short-Adams and Jones-Howell in round 8. Unfortunately, though, that's pretty much where the good news ends.

You may recall that in that original post we quoted Chris Kreuzer's pre-tournament opinion that,


With 12 GMs in the field, you would hope the leading GMs after 11 rounds would have played at least 7-8 other GMs

Chris subsequently took a look at how things had actually turned out and published his findings on the EC Forum. He has been kind enough to allow me to use his figures here. As you can see, there was just one instance of somebody reaching his mark. 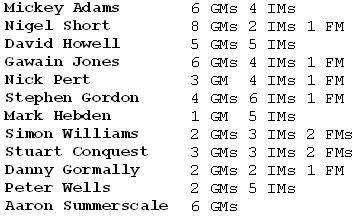 That doesn't look good, but raw figures like this can sometimes be misleading. These are a couple of things we need to take note of here.

First, it's true that there were seven IMs in Sheffield (Richard Pert, Hawkins, Palliser, Zhou, Hunt, Andrew Ledger and Houska) who were actually higher-rated than the lowest-rated GM (Summerscale). However, even if we treat these seven as honorary GMs that still only adds another four people (Adams with '9', and Howell, Jones and Gordon with '7') to the list of folk who received the kind of opposition that we might have hoped for. Even after expanding the field, then, more than half the Grandmasters at Sheffield didn't meet the benchmark that we'd set.

Second, we should also examine the caveat that Chris put forward, i.e. that the hoped for figure of 7-8 GM opponents for each Grandmaster,

So did they, or did our top players not get as many games against their peers as we'd hoped for because they simply didn't play very well? When we look at the final crosstable the answer becomes clear.

Half-a-dozen of the GMs finished in the top seven (Hawkins was the exception) and another four tied 8th to 16th on 7/11. Williams and Summerscale did the 'worst', but even they were only half a point back, finishing in 17th-23rd place.

Aside from finishing places, we can also isolate the GMs games against non-GM opposition to see if they were underperforming there. That would be a reasonable explanation as to why there weren't so many all GM clashes as there might have been, but once again we see it wasn't the case.

Grandmasters at Sheffield: score against non-GMs 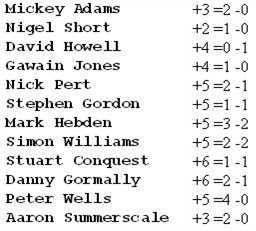 Hebden and Williams seem to be a little off-form, although only to the tune of half-a-point or perhaps one point below par. Everybody else seems to have scored pretty well, especially when you consider that these figures include games against IMs and even the 2400+ IMs we counted as GM equivalents earlier. 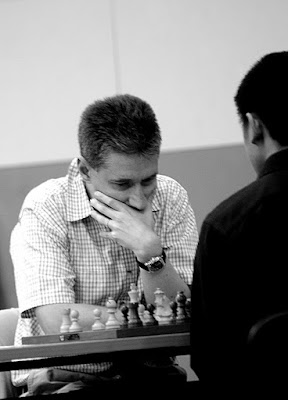 "I'm better than all of you. Get over it."
as Release the Kraken put it.
I'm afraid the reason the field of a dozen Grandmasters didn't generate as many all-GM clashes as we'd hoped - 21 in total, or less than two per round - is not because the top players were underperforming and not because the tournament was hit by a series of freak pairings. It happened like it did because that's exactly what happens when you have an eleven round swiss tournament and half the field are at least 400 to 500 points off the pace.

What a waste. The best players end up in the final positions, but they get there by playing relatively moderate opposition far too much of the time. Nick Pert, who finished equal third after playing as many people rated in the 2100s as he played Grandmasters, is the most striking, but certainly not the only example of how this happens.

So it's not at all a great system, but it is nevertheless the format we use and, as has been pointed out to me in the past, the one thing that all systems have in common is that you have to play well to win. Congratulations, then, to Mickey Adams for coming out on top.

Talking of Mickey, in case you were wondering what he thinks of all this, you may be interested to know that his column that appeared in the Daily Telegraph on the middle Saturday began with the following words:-


The world team championship is the fairest test of the strongest nations ...

... the all-play-all format is more even-handed than the vagaries of the Swiss pairing system that is currently used in the Olympiad.


Photo of British Championship trophy from atticuschess.org.uk
Other photos from www.britishchess2011.com

Thanks for the mention.

An important factor is *when* the GMs lost to non-GMs. Hebden, Williams and Pert all lost to non-GMs in round 1 or 2. Similarly, Gormally, having lost to a GM in round 3, then lost to a non-GM in round 5. Early results like this lower their chances of playing other GMs for most of the tournament.

All play alls would definately be the best test to find the strongest player, although few would argue this system didn't find the best two anyway. There was great fighting chess in the British, partly down to the need to score heavily, given the long tail. In an all play all, you could imagine players aiming for plus three or four and having several days off with short draws.
Andrew

Comparing formats for team and individual events isn't straightforward because of the lower percentage of match draws in team events. Also A-P-As are likely to be fairer in team events because of the equal distribution of colours both in individual matches and across the course of the tournament. In individual A-P-As players can be massively advantaged by the distribution of the pairings. "Favourable draws" are not just about who you play but when you play them, and with which colour.

Best format for Olympiads IMO is Swiss based on game points (easier on the top boards as well who can be given rest days without materially affecting the team's chances of victory).