Blog 17 in the series. This one mainly by Martin Smith.

One by-product of our Leeming adventures has been the discovery of sundry chess-in-art nuggets that were perhaps unknown, or should-be-better-known, by the chess-in-art community.

By and large we found these by accident, but in the one case it was put on a plate in front of us, and right at the beginning of our excavations to boot. It was Mr Wynn Jones at the National Gallery of Ireland who drew it to our attention. That’s not all we have to thank him for - it was he who pointed us in the rather obvious direction of Hereford, back in January 2010, to find the Gents, even if, as we recounted in episodes 2 and 3, they weren’t quite the Gents we were expecting.

Mr Wynn Jones’s chess picture revelation was this, painted by Stephen Lewin. It emerged into public view at auction in 1996, and has since disappeared again. 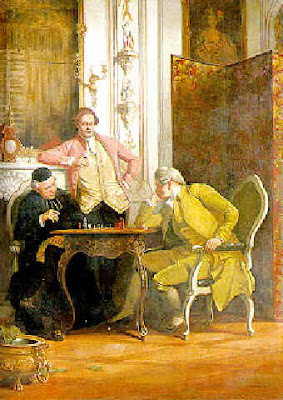 You would be forgiven for thinking it was created in the 18th century, when in fact Lewin had his hey-day at the turn of the 19th and 20th centuries. He is described as a “figure painter” in the meagre literature on him, with half a dozen pictures in the RA Summer Exhibitions. His Chess Players was painted in 1907, selling at Phillips in 1996 for £2,100.

It has a convincing period feel, and recreates French style furniture and décor. However, it does give us the opportunity to comment, tartly, that having looked at rather a lot of chess paintings recently, we have seen quite enough over-dressed clerics, thank you very much.

We have our old friend Mario Praz to thank for our other discoveries. You’ll remember that it was his Interior Decoration book that kicked off our odyssey. It also shows, in full colour, a major work: Johann Erdmann Hummel’s Game of Chess, painted in c.1819, just a year after Thomas Leeming exhibited his masterwork at the Royal Academy. Hummel’s is a better-known piece in the chess-in-art world, and there is a lot to be said about it, which we will do in our next episode.

Praz was in fact a prolific, if not always appreciated, author. Critic Cyril Connolly for example, referred to one of Praz’s books as the one of the most boring he’d ever read, although he wasn’t referring to Praz’s other magnum opus Conversation Pieces when he did so. It is not only a comprehensive exposition of that genre but it also, unwittingly, turned up no less than three obscurish chess-in-art works.

The first one is General Dundas and his wife playing chess, by Sir Henry Raeburn (1756-1823). Raeburn is well-known for his wry painting of another chap enjoying his favourite pastime, the Skating Minister of circa 1795.

Although Raeburn is mentioned by name on Bill Wall’s Chess in Art site, there are no details of his chess painting. We have since discovered it is on the omniscient Wikipedia. 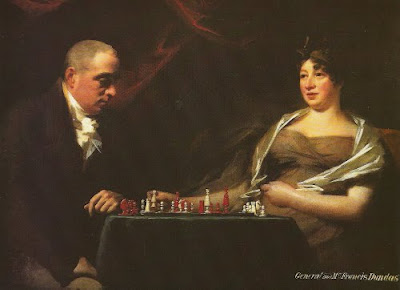 Quite why Praz has this work in his book on conversation pieces is a touch perplexing as one criterion in his own definition of the genre is that there should be “a gesture signifying conversation or communication of some kind”. Supposedly “communication” is elastic enough to include playing chess, even if the General’s rather bored wife doesn’t show much interest in the game. Perhaps though, she is “communicating”, in the way of a comfortably married couple by some near subliminal signal privy only to themselves: that her dear husband should, please, get on with it.

Praz refers to, but doesn’t show, another chess-based double-portrait, this one by Dutch artist Pieter Christoffel Wonder (1780-1852). In the 1820s (contemporary, just, with Leeming who died in 1822) he was invited to live in London by General Sir John Murray, who had a less than glorious military career under Wellington, narrowly surviving a court-martial for deserting his guns, in spite of which he ended up as the Member of Parliament for Weymouth.

Wonder painted some London Society portraits, with a couple in the RA Summer Exhibitions. His masterpiece was a portrayal of Sir John showing off his art collection, a generous, flattering and, of course judicious, appreciation of the General’s sponsorship. It is his chess painting that interests us, and it shows Sir John playing with his god-daughter Ellen Adderley. It is mentioned in Bill Wall’s listing, and we have tracked down a black and white reproduction. 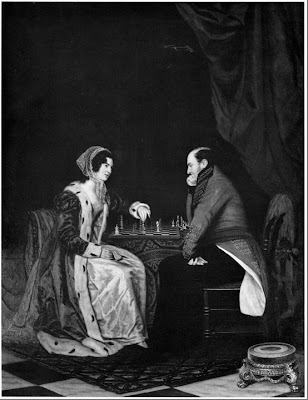 It is maybe unusual in showing the lady making the move – but as it is his god-daughter, and not his wife, it doesn’t represent the symbolic overthrow of the domestic order, just the optimism of youth versus the stolidity of experience.

Finally we come to a real obscurity, referred to by Praz only and no other Chess in Art sites (as far as we are aware), by yet another Hümmel – Karl this time. Praz gives a black and white illustration of what appears to be a highly ambitious painting (in water-colour, says Praz): “Queen Caroline’s Drawing-Room at Frohsdorf”. Unfortunately this effort to share with you what was already a degraded image in Praz is not wholly successful. 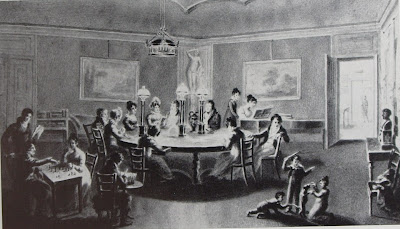 Amidst all that hubbub of conversation the chess players try quietly to pursue their game in the bottom left hand corner. 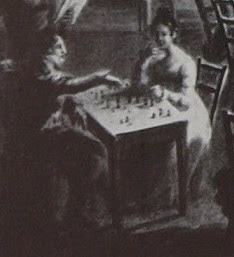 Caroline was the youngest sister of Napoleon Bonaparte, and if she was already (as according to Praz) widowed at the time of the painting that dates it between 1815 and 1830.

So that’s four chess paintings we’ve encountered en route with Leeming, and we hope you enjoy them. There’s another one, or maybe two, next time.

Every Picture Tells a Story index
Chess in Art Index
Posted by Martin Smith at 11:00 am