How To Beat Your Dadd At Chess

Here is another episode in this Dadd mini-series, and the artist himself is no longer the main focus. There is even a bit of chess. The headline above was irresistible. Apologies.

Try this one for size instead:

The story starts with a lurid claim in a letter dated 27 November 1894 addressed to Kensington Police Station, and posted from Dublin.

The murder that was committed I did it. I did it just to the right of the door of a gentleman. I got her by the throat and tried to choke her, but without success. I got her on the ground and cut her knife with a Sloyd knife. It was a very good cut. When I had cut her a fellow was coming along, so I flew for my life, but left the stick, and the knife was thrown away in the back lane in a back street. I did the murder at 12 30. So good bye. On the job.

From Jack the Ripper. 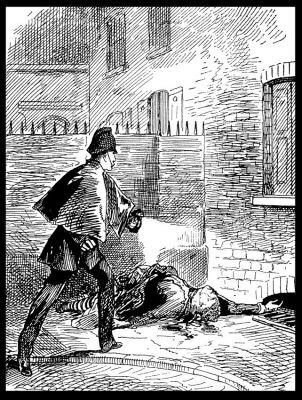 The discovery of an earlier Ripper victim.
From 'The Pictorial News' 6 October 1888


The letter was identified as being in the handwriting of Reginald Treherne Bassett Saunderson, nephew of Colonel Edward J. Saunderson, Conservative Member of Parliament for North Armagh, Orangeman, and supporter of Home Rule, and son of Llewellyn Saunderson, Justice of the Peace.

On the evening of the murder on the 25th, Reginald, the would-be Jack the Ripper, had slipped out of a privately run institution for “gentlemen mentally affected" (otherwise less tastefully advertising itself as a “Training Institution for Imbeciles”, and indeed an “Asylum for Idiots”) at Eastcote, Hampton Wick, Kingston upon Thames in Surrey. His family had placed him there six years previously.

He took with him the knife (of said distinctive Swedish manufacture) from the carpenter’s shop, and the cherry-wood stick, with a crooked handle, from another patient (both items later recovered from the crime scene). Then in Holland Park Road, Kensington he murdered the unfortunate Augusta Dawes (aka Augusta Dudley) aged 29, a barmaid from Bristol, said by a witness to have been in the Holland Arms Public House that evening, and by The West Australian newspaper of 25 January 1895 to be of “ill-fame” – a familiar innuendo.

He was tall, handsome, good at football and rowing, and 22. So, Saunderson would only have been 15 at the time of the Whitechapel murders in 1888 and Ripper scholars accordingly rule him out.

A witness who saw a man and woman together in Holland Park Road was Herbert Schmalz, artist and exhibitor at the Royal Academy, with a studio in the same street... 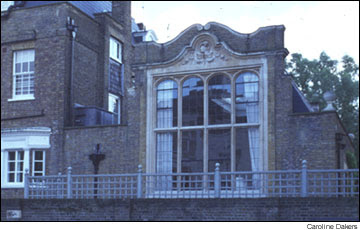 Schmalz's other studio, round the corner in Addison Road.
It's still there today.


… and who - if you will permit another irresistible aside - told the Inquest (which was assisted by Superintendent Ferrett of West Kensington Police Station – you couldn’t make it up) that he was unable to do a sketch of the suspect as the man's face was in shadow. No doubt Schmalz would anyway have preferred to sketch the lady as “his paintings frequently involved the tying-up of women, a lot of execution and death by various means, and one might expect that at the time his works might have raised questions of taste."

This is an example of Schmalz's handiwork: 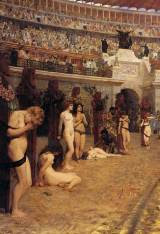 
My God. If the Peelers had seen that they'd have wondered if they'd arrested the right man.

The Inquest jury found that it was a case of murder, putting Saunderson in the dock. They added a rider to their verdict calling attention to the insufficient lighting of Holland Park Road, and suggesting "that it could be improved so that it might not be a harbour for questionable characters" (dodgy artists included, by any chance?).

Saunderson had been apprehended in Ireland a few days after the killing and when, the following January, he was tried at the Old Bailey this was the result:

....and off to Broadmoor (there's the Dadd connection, kind of) he went, admitted on 5 February 1895, dying there nearly fifty years later in 1943. 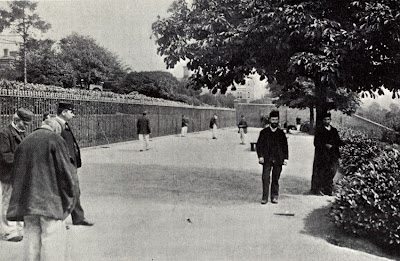 The Terrace at Broadmoor (Berkshire) c. 1908


The staff occasionally noted that he played chess, and a record in 1902 refers to him as an “indefatigable chess player”.

Note the BCM's comment that the substantial victory of the SCU was because two games on each board favoured the Southerners who supposedly had more time on their hands to apply to their chess. Well Reginald certainly had plenty of it on his, although that didn't stop him losing both games to Mr Liversedge of Yorkshire.

And here, I think, he is again in the Irish Weekly News of 23 January 1904, in a game played in the Kingstown Society Correspondence Tournament. Sorry to say he lost this one, too; though he must have missed a win. He clearly was a decent player, well-versed in the Kieseritsky Gambit, Long Whip Variation (Schmalz would have liked that) . The notes are anonymous. 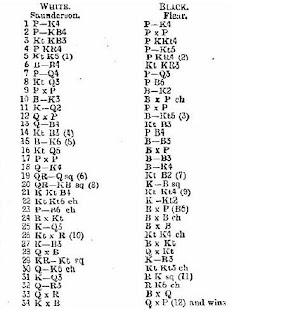 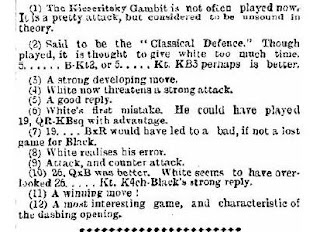 It all makes a good story, but spare a thought for Augusta Dawes who came to London for work, and the three year old deprived of its mother.

There'll be another shocker from Broadmoor along shortly.

Thanks again to Dr. Tim Harding, this time for putting me on to the Saunderson case and mentioning the Ireland-England match; and Mark Stevens at the Berkshire Record Office for his assistance (BRO is the source of the photo).
The Ripper victim pic comes from here. The poor unfortunate on that occasion was Catherine Eddowes.
Some of the press coverage of the Saunderson case is given here and here.
The quote on Schmalz comes from Caroline Dakers' essay here
Richmond & Twickenham CC and Kingston CC members with a taste for this sort of thing can find out about Eastcote here.
BCM for 1903 happens to be on Google books. NCU v SCU is covered in the August issue, pp 342-345.

Many thanks for another fascinating post, Martin, I didn't know about Saunderson.
This is the second time in 3 days I've been pointed in the direction of the Lost Hospitals of London website. I'd read something about the history of Normansfield before, and spent the first two years of my life just down the road from there.
I loved Dr Brain the Neurologist, who seems to have stepped out of a Happy Families pack (a game which was invented by John Jaques II, the chess set manufacturer and sometime employer of Emma Holdich, the aunt of the wife of my 2nd cousin 3x removed).
Looking forward to more about chess in Broadmoor in subsequent posts.

What today we would call a chess club?

Thanks Richard for your interest, and help. Yes, more chess in Broadmoor to come.