This is the end IX 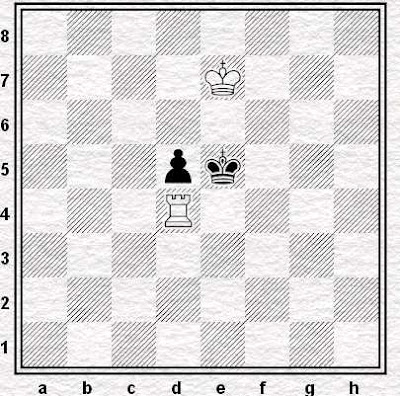 A little after this post appears I will be settling down to rounds five and six of the Berks and Bucks Chess Congress. If my recent tournaments are anything to go by, I'll probably have played a fair amount of chess already, and still two games to go. Yum!

One of the things that appeals to me about tournament play is that the games - my games, at least - simply tend to go on longer. I had two draws that lasted 60+ moves at both of my last two tournaments (4 in 14 games), for example, and just two of similar length in all my club games going back to the start of the 2007-2008 season (2 in about 120 games). Something to do with my adjournment sessions tending not to happen in practice, I guess.

Anyhoo, the higher the number of moves, the higher the chances of getting an endgame (unless ...) and the greater the probability that you'll end up with something like the position at the head of today's blog.

White to play and win - something to keep you chessically occupied this bank holiday if you're not already playing a tournament. It's quite a famous study, though. If you've already seen it you might want to take a look at Why study the endgame?, another White to play and win rook v pawn position, instead.

Finally, should your thirst for this sort of thing not already be slaked, here are three more rook v pawn endings. In these, though, I'm not going to tell you whether the rook wins or whether the pawn manages to draw. 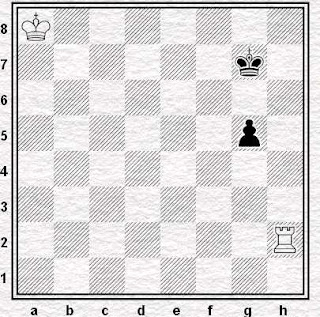 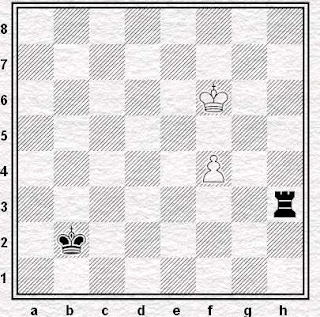 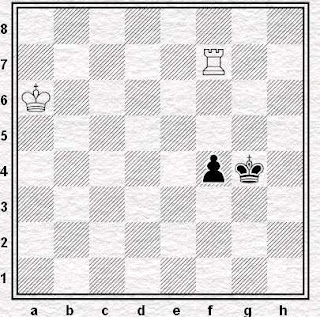 No-one having a go at these? I'll hazard these guesses (without having put them through any nearby silicon dachshunds):

Good effort nonny, but as your maths teacher would have told you, you're going to have to show you're working out for full credit.

Wow I actually looked at the Reti position only 1 hour ago. There are actually 2 moves that win- Rd3 also wins. Think I looked at the last position also- something to do with "shouldering". These were in Fundamental Chess Endings by Gerd Muller and Frank Lampard.
Andrew

We must have had the same maths teacher, but different English teachers. Mine would have grimaced at your usage of "you're".

Yeah, I'll have a go this evening as soon as I get home from work. Coincides nicely with the fact that I'm doing some work on my endgame to prepare for the coming season.

Not sure how that rogue apostrophe slipped in there - even at two in the morning.

Have spent the last day thrashing myself senseless for my apostrophe howler and now have a mo to pop back to answer some of the comments.

III -
yes the key idea is the counter intuitive placing of the king in front of the pawn. Need to be able to shoulder the rook's king off by crossing to the over side as suggested.

I - this comes from Emms' book and apparently 1 Rf2 is the only way to win, the point being that you make a 'pointless' move with your rook to stop the pawn's king from block your king from coming near.

It is a draw though, but it's a draw in an interesting way. It's worth finding you're way to the end - well at least I think it is. White uses the shoulder charging defensive method - but in a different way. It leads to a surprising (if you haven't seen it before) conclusion.

So II is the one where White ultimately has to promote to a knight? Something like ...

Tomorrow, JMGB can thrash himself senseless for the illegal 3. ... Kd5 in his last comment.

Yes that's it. Something about promoting to a knight to save the day really tickles me. Has anybody ever had to play that ending out? I did once at a Golders Green Rapidplay but my king and knight were in the centre of the board so it wasn't too desperate.

Anyhoo, must dash for another bout of self flagellation.