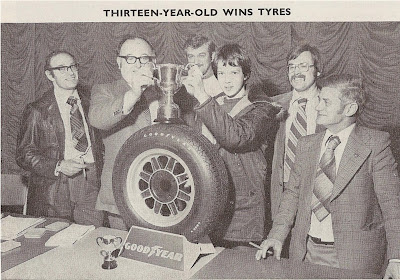 You may have missed this, what with everything else going on, but congratulations are due to Mickey Adams. After winning yesterday's play-off he now has the 2011 British Chess Champion title to add to those that he won in 1989, 1997 (shared) and last year in Canterbury.

Nice one Mickey, then, but it seems a bit harsh on Nosher that he should have missed out on what would have been his fourth championship (previous wins: 1984, 1987, 1998) because of a brace of games played at 20 minutes on the clock plus ten second increment per move. All the more so after he matched Adams' +6 =5 -0 over the regular eleven rounds despite facing tougher opposition.

We'll have more on that next week, but for now: them's the rules, so hurrah and huzzah for Michael Adams. While he celebrates Nigel gets to console himself with the knowledge that he'll be leaving Sheffield with some serious wedge - getting on for £7,000 not counting expenses/appearance fee - in his back pocket. He's come a long way since the days when winning a tournament meant £65 cash money and a set of Goodyear tyres thrown in.

By the way, check out Nosher's Parker. I think the organisers must have insisted that he wear it to ensure a teeshirt with an unseemly political message - something like, "hey everybody, let's all get along" or "I like tea" - remained tastefully covered up. Thank goodness chess doesn't make a complete dick of itself by doing that sort of thing these days, eh?

Addendum:
As I was writing the above last night the teeshirtgate story appeared on the Guardian website. Oh goody. Just what we need.

I suspect this story will run for a while longer. We at the S&BC Blog will certainly be coming back to it soon, if only to ask, why is RDK turning up at the opening ceremony OK, but a red teeshirt with some writing on it completely out of the question?


Addendum to the addendum:
Don't miss Martin's Chess in Art Postscript from Saturday. It features a man playing chess in top hat and tails. Just what we need right now, wouldn't you say?
Posted by Jonathan B at 8:11 am

Really looking forward to you guys' take on this.