A cartoon! An unknown celebrity! A sub-literary mention of chess! A photo of the you-know-who, yes you know, those guys! And absolutely nothing else awaits you in today's Chiv Chat!

The doorman banged a saucepan to wake up Marie Vassiltchikov in Berlin: air raid, down in the basement. It was August 26, 1940.
A few nights later a pair of hundred-pound bombs fell on a Berlin street and blew the leg off a man standing in his doorway. A few nights after that, the RAF gave the city a "good strafing," wrote William Shirer. The next night, timed-release bombs fell in the Tiergarten; prisoners from concentration camps removed them.
Vassiltchikov described her air-raid cellar: "Small children lie in cots, sucking their thumbs. Tatiana and I usually play chess." When her sister had a slight fever, they decided to brave a raid above ground. The planes flew very low, and sudden flashes of light filled the bedroom. "Tatiana fears that if the house is hit I might be hurtled into space while she would remain suspended in mid-air, so I got into her bed and we lay hugging each other for two full hours. The noise was ghastly."

Still, in chess terms Human Smoke is a "positional masterpiece" - making the case gradually, carefully, little by little, for a reappraisal of the practical inevitability and moral permissibility of World War Two through small little moves like the above. Individually such passages seem like very little; imperceptibly they link up until Baker's vast tragic vision takes on its terrible shape. 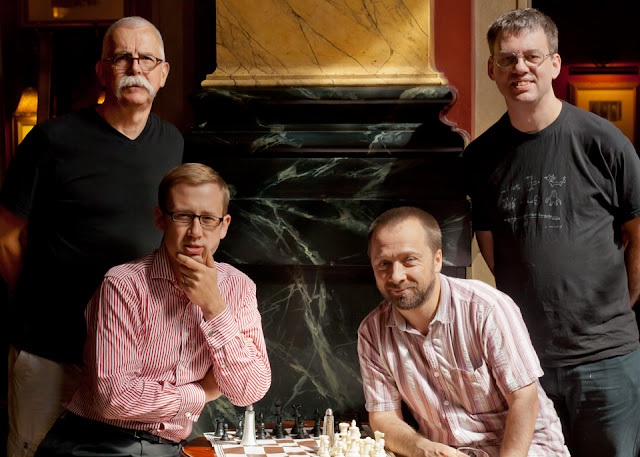 Can somebody photoshop Morgan into the line up?

He's the hypermodern blogger, missing from the middle of the picture.

From the top ten jokes of the Edinburgh festival.

5. Matt Kirshen – “I was playing chess with my friend and he said, 'Let's make this interesting'. So we stopped playing chess.”