Where do old chess moves go when nobody wants them any more?

Is there a retirement home for outdated novelties? A place on the coast where they can live out their days in genteel comfort, perhaps? Or do they end up wandering the streets instead, their days spent chugging cans of Tennents Super, yelling at passers-by and mumbling to themselves that they could have been contenders?

Do the more spectacular TNs ever seek out their creators and beg for a chance of a longer life? "I've ... seen things you people wouldn't believe". Is that what they tell the prosaic refutations that chase them from the board for the last time? 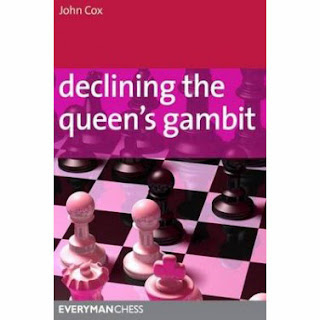 Los Angeles, November 2019. San Lorenzo, January 1993. England's Nigel Short takes on Holland's Jan Timman for the right to be the first Westerner in twenty years, and only the second in living memory, to challenge for the World Chess Championship. If you weren't around at the time you might not find it easy to grasp just how big a deal that was, but the end of Soviet hegemony was no less significant for chessers than the crumbling of the Berlin Wall and the end of East European communism itself was for normal people.

In five of his seven White games in the match Timman opted for 1 d4 against which Nosher chose his old favourite, the Queen's Gambit Declined. They'd spent months tooling up for each other, the world was watching and hundreds of thousands of pounds were at stake. The variations chosen to be the battleground for this match were important.

What Short and Timman were playing was state of the art Queen's Gambit Declined theory. It was in 1993, anyway. Time moves on, though, and while those five QGDs might have been at the centre of the chess world's attention in the early 1990s it's a completely different story today. Looking through Declining the Queen's Gambit, the book Everyman released a few weeks ago, I see that while game 7 appears in an extensive note to a main game, none of the others are mentioned at all. How the mighty have fallen. 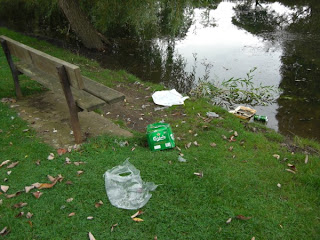 Games 1 and 3 had been a mini-duel featuring the main line Tartakower.

Timman later wrote that he knew that Short had reached this position fairly frequently in the run up to the match. Now he had his chance: time to reveal his preparation and spring the move that could make him famous. 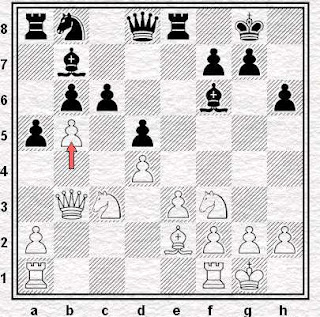 14 b5 "A new but principled approach", Timman said. "White leaves his opponent the hanging pawns and tries to get a strong covered passed pawn on b5."

That was the plan, but Short wasn't fazed. 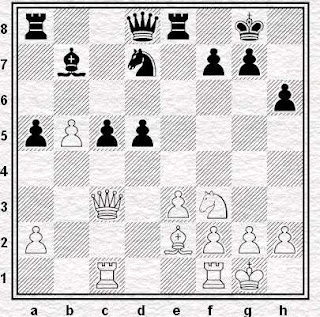 "Hanging pawns positions are very favourable for the player who is attacking them." Short explained. "However, the crucial difference here compared to other Queen's Gambit variations is that the white pawn is on b5. I do not believe that adds to White's position. In fact, I think it's a disadvantage to have this pawn on b5 as opposed to b2."

The 'principled approach' and a major part of the 1993 Candidates Final these games might have been, but a small tweak to the move order, 12 ... a5 straight away instead of 12 ... Re8, 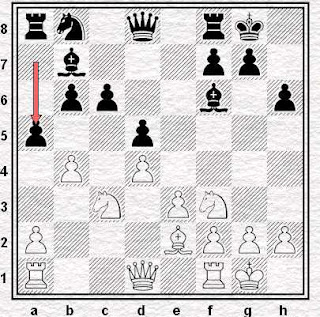 The Timman - Short Tartakowers getting shunted into the background because of a move order nuance is sad enough, but game five is even more tragic. That one featured Nosher's pet line against the QGD exchange 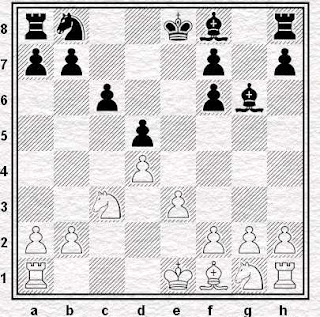 Short had first used the idea against Ivanchuk in Linares a year before San Lorenzo. Chucky responded with 10 Kd2 and 11 Bd3 and the game ended in a draw in 35 moves. Timman thought he could do better and tried a brand new move.

JT: "I wanted to keep the the castling kingside option open."


Cox pays a fair amount of attention to this line, analysing the 10 Kd2 of Ivanchuck - Short as well as 10 h4 and 10 Nf3. 10 Rd1, though, that doesn't warrant so much as a footnote. Well you can't cover everything and Timman's move didn't work out very well at all. Black equalised fairly swiftly and the Dutchman, who proceeded to make a total horlicks of the endgame/queenless middlegame, was lucky to be offered a draw shortly after the first time control.


A cruel fate. 10 Rd1 hasn't just been bypassed like those Tartakower games, it's been run over by something much better. Invented to help Timman win a Candidates' final it might have been, but now it's just irrelevant. Unwanted. Filed in the dustbin of history alongside the Sinclair C5 and the horse-drawn Zeppelin.

That's the permanent revolution that is chess theory for you, I suppose. It doesn't matter how important you seem - how important you are - sooner or later you will be replaced. You will be forgotten. Even theory-dense tomes like Declining the Queen's Gambit will leave you out.

I imagine the Queen's Gambits from the Kazan 2011 Candidates (Kramnik-Radjabov; Grischuk-Kramnik; Grischuk - Aronian; Grischuk - Gelfand) are feeling rather pleased with themselves at the moment. And yet, major players in the biggest events and talked about in the most up-to-date books though they might be, they're also already on their way to a park bench or a nursing home by the sea.

Right now Cox makes numerous references to them, but in twenty years the Kazan Queen's Gambits will have joined their Timman-Short predecessors and all the others that went before them in quiet unremembered obsolescence. It's inevitable.

All those chess moves will be lost in time, like tears in rain.

Jan Timman and Nigel Short quotes taken from New in Chess, 1993/2
c5 photo from wikipedia.
park bench from here
Posted by Jonathan B at 8:00 am

Indeed - there were huge amounts of theory produced on the 1e4 e5 openings in the 19th century (Kings Gambit, Giuoco, Evans) which is virtually forgotten today.

At least from the mid 1960s we have Informators and similar to "preserve" this stuff - maybe for a future Larsen or Bronstein to revive??