This is the end VIII 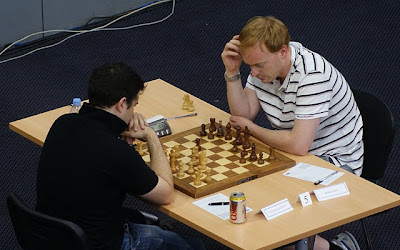 Nick Pert seemed to get himself quite a few endgames in Sheffield. Aside from that 144-mover against Gawain Jones in the last round (Draw Bores), he ended up with a bishop ending against George Salimbeni in round 3, bishop and knight ending against Kolbus in round 5, a rook ending against Adam Hunt in round 7 and a double rook and minor piece ending against Houska in round 8.

It was probably just as well that out of all of them only The Corporal was able to hold Pert to a draw. Aside from avoiding giving an uppity blogger the chance to take the piss - Epishin failing to mate with B&N against king? How we laughed - that 90% score won't hurt sales of his Killer Endgames DVD set. 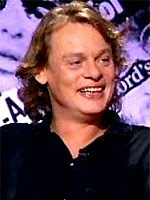 Not that everybody would have you believe that studying the endgame is a good idea. In the video below Peter Svidler and a young Martin Clunes suggest that studying other areas of the game should be the priority.

I suppose whether or not you agree with this will depend on how you define Svidler's "starting from a certain level" at 7:51 in the clip. I play people up to the high 180s ECF/2150 elo and at that standard it simply isn't true that you get 'killed' in the opening if you don't know exactly what you're doing. Whether it's different at 2250 or 2350 I wouldn't know, but for me at least the argument doesn't really apply.

Still, it's an interesting discussion and well worth a listen. The endgame content of the chat starts around 2:40.

Openings don't matter too much at 2350 level either. I can't remember the last time I lost directly from the opening against anyone 2350 or less. Obviously they affect your probability of later success but no more than that.

I remember being impressed when Nick made something out of nothing against me in an ending (4NCL 2006) though he let me off with a draw in the end.

His best ending in the British was really the one against Gawain - it didn't really look viable to squeeze for a win around move forty, but had he played ...Qc2 around move 117 (!) it would have been a textbook example.

The main benefit I get from studying the opening is simply that I have more time left for the rest of the game.