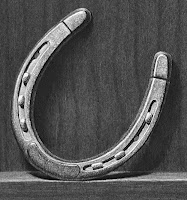 I'm not sure how Spanish chessers would say, "It was a tournament of two halves, Brian", but however they'd do it, it would be a pretty good description of my ten days in Benasque. Rounds one to five and six to ten were so different for me that I could easily have been playing two entirely separate five game Swisses: a brace of tournaments-within-a-tournament, which, as it happens, were divided by an incredible dollop of good fortune.

I don't really believe in luck as far as chess is concerned. Often when I hear people talking about being unlucky, or, more rarely, the reverse, it sounds to me that what they're actually describing are patterns that they cannot, or will not, see. Anyhoo, since by definition luck is something outside of our control there doesn't seem to be much point in devoting our time to it - as opposed to thinking about what we can do to give ourselves a better chance of being lucky and how we can minimise the likelihood of suffering accidents, I mean.

Luck does exist, of course - those amongst our esteemed readership who are of a slightly older vintage may recall how Jonathan Speelman's second's girlfriend happening to buy a newspaper on her way from Norway to London had a decisive impact on his Candidates' match with Short in 1988 - but it evens out in the long run and, clearly, it's what we do with the chances that come our way, deserved or otherwise, that matters. At some point I'll get around to blogging about this in the context of an individual game (specifically, the 4th round of Sunningdale in May), but today I'll stick to how a chance event can, and did, turn the course of an entire tournament.


It was not, by any stretch of the imagination, what you might call a good start. After losing in the first round I won by default in the second, got duffed up in short order by a 2470 in round three and drew against a lower-rated opponent in round four. This last game was certainly not a gimme, but, at 1840-odd, she was in a range against which I've scored pretty well in the season just gone and I was annoyed with myself that I didn't win.

Including my games from Gatwick in June I was now nine without a win and my measly 1.5/4 was lacking a good deal of lustre.  I think it's fair to say that I was lacking a bit of confidence when I sat down to face my fifth-round opponent, a local man rated in the 1820s.

I was Black and after 22 not hugely interesting moves, we arrived here. 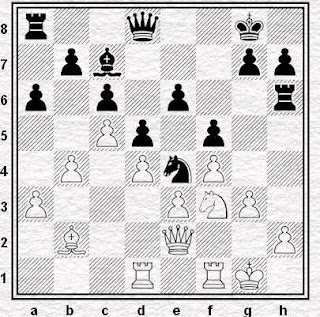 This looks like the sort of thing that you'd expect to get playing blitz on the internet against modestly graded opposition. Breaking open White's position might not be entirely straightforward, but it's hard to imagine how Black could possibly get into trouble from here. I managed it, though.

My last move before the diagram position was 21 ... a6 and I remember thinking before playing it that sooner or later White would go a3-a4 and b4-b5 and I'd have to respond with ... axb5 otherwise he'd swap off and I'd be left with a pawn on a6 that I wouldn't be able to defend. When it came to it, however, I jiggered things up by playing my moves in the wrong order.

Around fifteen moves later, I had a long think and calculated a line that went

That, at least, was what my head decided to do. My hand, however, had other ideas and pushed my king forward forgetting to swap pawns first. FECK!!!

I spent the next few moves debating whether I should stab my own eyes out with a spare bishop or simply do the world a favour and go hurl myself off a mountain (there being quite a few to choose from in the immediate vicinity). Then, in this position, 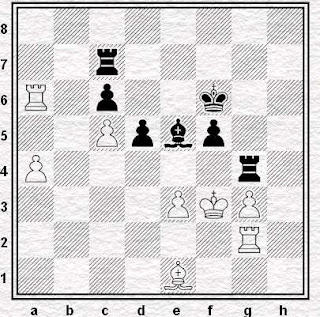 That, dear reader, is how I managed to win my first game in Benasque. It was a ridiculous win, for sure, but one which completely transformed my tournament nonetheless. After struggling to hit a cow's arse with a banjo during the first five days, I went on to score 50% against opponents with an average rating in the 2080s (180 ECF, give or take) over the last five and that, as Justin kindly mentioned on Monday, turned out to be enough for me to win the trophy for the 'Best score by a player without an elo rating' prize and the 200 euros that went with it*.


Uploaded to Youtube by 'Hot4Kylie'.
One feels this is unlikely to be whoever it was that put up all those Master Games

Was I just hugely lucky, then? Well, I was very fortunate, in the sense that if my opponent in this game hadn't blundered the rook I'm quite sure that my tournament as a whole would have ended very differently, but, even so, I don't think it was just luck.

Yes, I was fortunate to get the opportunity in the first place - we could probably play another hundred games without my opponent playing a move like 45 Rb2 again - but I still had to play well in the following rounds (or better than I usually do, at least) to make use of the chance I was given.

What's Spanish for "You make your own luck in this game"? Whatever it is, I'd rather like it as my motto, but a helping hand every now and is never unwelcome.

* Incidentally, if we're talking about good fortune, I should also mentioned that one of my opponents back in Gatwick happened to be unrated. If he'd had a rating I'd have finished that tournament having played nine rated games in total and would have therefore gained an elo myself. My name would have appeared on the July list and I'd not have been eligible for the prize that I ended up winning. Directly or indirectly Sean Hewitt has helped me win quite a bit of money over the past few months.

Please can you tell us the newspaper story.

Ah - found it;
Apparently Speelman's regular second begged off under pressure from Short for whom he also worked on occasion. The girlfriend of his replacement, Jonathan Tisdall, picked up a Norwegian newspaper on her way to the match in London. In the chess column they found the new move in a Gurevich-Sokolov game from a fortnight before.

Spess had been seconded by William Watson in the previous match. Not sure about Nosher putting pressure on Watson to step down - that certainly wasn't what Speelman said at the time - but, in any event, for the Short match Speelman started working with Jon Tisdall.

Tisdall lived in Norway and his girlfriend came over late. THe newspaper had the Gurevich v Sokolov game in it and 10. 0-0-0 novelty in the Bf4 Queen's Gambit Declined - a huge novelty at the time.

This was long before the internet and games from the Soviet Union could take two to three weeks to filter through to us here. Short didn't know about the move, Spess landed it on him in game 3 and won. Game 4 Short tried too hard/too long to win to catch up and ended up losing with White. Suddenly he's 2-0 down in a six-game series and the match is over.

All because the second's girlfriend picked up a newspaper? Well not really - see thrust of today's blog - but certainly it changed the course of that match, and possibly the result too.

And gave us all a laugh, too.