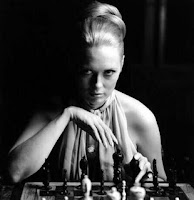 There seemed to be quite a few lady people playing in Benasque. I mention this not because it's a bad thing - it obviously isn't - nor even because it's a good thing - although, for various reasons that shan't detain us today, it seems to me that it is - but simply because I noticed it. Actually, the really noticeable thing was not so much that there were lots of females at the tournament per se, but the fact that for the most part they were adults and not girls.

Women in their twenties and older. It's a constituency of chessers that barely exists in England and yet in Spain it's one that seems to be flourishing. OK, there were over 440 players in Benasque so you'd expect to see more females there than at an event like Gatwick where there were 'only' 156 of us, but it seemed to me that not only were there more in Benasque in absolute terms, there were more proportionally too.

As it happens I played two women during my fortnight in Spain: Leticia Pardo Simon in the fourth round and WIM Roquelina Fandino Reyes in the tenth. By way of comparison, I'd had just one female opponent in more than 140 rated games in England between September 2007 and leaving for Benasque at the beginning of July (Julie Korseva in the first round at Sunningdale in May of this year) and off the top of my head I can only remember facing two other women over the board* going back a decade more.

It's not so unusual to see girls (by which I mean under 12s or thereabouts) at the Richmond Rapidplay, say, or Golders Green (I played Akshaya Kalaiyalahan at Adam Raoof's tournament last February), but adult females in club or tournament chess are a different story. Not completely unheard of, for sure - over the last couple of seasons my own club has received visits from Susan Lalic and Natasha Regan playing for, if I recall correctly, Ashtead and Redhill respectively - but certainly much more of a rarity.

Consider the field in Sheffield, for example. At the time of writing 5 of 85 entrants to the Championship itself (5.88%) are women which, although up from last year's 3 of 78 (3.84%), is hardly substantial and while I haven't checked the subsidiary tournaments my guess is that the proportion of women in those events will be even smaller.

Large numbers of women just aren't playing chess in Britain just now and yet they do seem to be in Spain. Well, larger numbers than here, at least. Either way, it's an interesting discrepancy, don't you think? I don't know how to explain it, and I don't know how to 'fix' it - other than to mention in passing that e2e4 going out of their way to attract women to their events is a praiseworthy initiative - but I can at least notice it. That will have to do for now.

PS:
In both of the games mentioned I drew from a winning position. I seem to remember reading in an Bill Hartston column that when giving a simul Anatoly Karpov would concede draws when playing against a woman because he considered it to be the chivalrous thing to do. I, on the other hand, did it because I'm incompetent.

* Anna Partington and Jane Seymour both of which must have been getting on for ten years ago. I did play Sarah Hegarty in the Coulsden minor back in 2000, but she was only ickle then, so that doesn't count. Incidentally, I could remember all these names without having to look them up which says quite a bit about how infrequently I've had women opponents in the past.

I think the proportion of women competitors in Benasque was about 1 in 11, which is some way short of satisfactory but nevertheless better than the UK.

I wonder whether the difference may lie in there being more chess in schools, and the connected fact that chess in Spain is considered sport. Perhaps for that reason it may lack the perceived quality of weirdness that it possesses in the UK, and girls are happier to take part.

(Not that girls are necessarily opposed to weirdness, obviously, but in my experience weirdness-friendly girls tend to become Goths rather than chessplayers. And how many Goths do you see at chess tournaments, eh? You tell me that.)

At the British Juniors c1987 later to be FM Jonathan Wilson seemed to be under the misapprehension that he was Andrew Eldritch from the Sisters of Mercy.