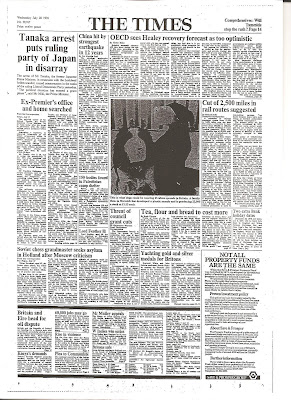 Soviet chess grandmaster seeks asylum in Holland after Moscow criticism
From Our Correspondent
The Hague, July 27

Viktor Korchnoi, aged 45, the Soviet chess player, has asked for political asylum in the Netherlands, the Dutch Ministry of Justice said today.

He has been in the country for the past three weeks competing in the annual IBM chess tournament, in which he shared first place with Britain’s Tony Miles. Korchnoi, whose whereabouts are being kept secret, has been granted a temporary residence permit, and a decision on his request will probably be reached within two weeks.

Jan Hein Donner, one of the Dutch competitors in the IBM tournament, said that many of the other competitors knew of Korchnoi’s intention to defect.

“Life has become impossible for him in the Soviet Union since he criticized world champion Anatoly Karpov”, Donner added. “He was subjected to increasing criticism and nuisance from both the Soviet Chess Federation and the authorities in general. He had been thinking about defecting for some time. I told him exactly how to go about it.”

Korchnoi’s family, including his wife and 17-year-old son, are still in the Soviet Union. He has frequently visited Holland, as well as many other Western countries, to play in tournaments.

Harry Golombek writes: The news of Korchnoi’s defection will come as no surprise, since of all the Soviet grandmasters he was the most outspoken in his condemnation and even ridicule of attempts made by Moscow’s ideologists to influence the world of chess.

But his decision represents a serious loss to the Russians. With Bobby Fischer no longer active, Korchnoi ranks as second in the world to the champion Karpov. His style of play reflects his personality – dynamic, independent and to a large extent original.

Tony Miles, the British grandmaster, said that at one stage in Amsterdam, Korchnoi asked him how to pronounce the word “asylum”, which gave him a shrewd idea of what might take place.

Moscow: Korchnoi’s wife Bela said from her home in Leningrad that she was surprised at her husband’s decision. She was awaiting a call from him. – AP