Every Picture Tells A Story: The Chess Gents of 1885

Number 16 in the series. This one by Martin Smith, with comment from Richard Tillett.

It is a happy coincidence that this episode of our series appears during the British Chess Championship in Sheffield as it focuses on another Congress held in another proud provincial city: Hereford, in 1885.

Thomas Leeming’s 1814 painting of the Gentlemen of Hereford Chess Club put Hereford on the chess map, and as we showed in our last but one episode (where you can also see the painting), it may commemorate one of the first ever provincial chess clubs in the country. Hereford may have had its ups and downs chess-wise ever since, but the Congress of August 1885 was a high point, with such stars as Bird and Blackburne in contention. It was as interesting then as maybe chess is now for goings-on off the board as much as on it.

One intriguing question for us was whether there was any connection between the Gents painted in the 1812 Chess Club and those involved in the Hereford Congress some 73 years later. There is a hint of a link. The second figure from the left in the painting is F. L . Bodenham, and in the list of patrons for the Congress was an F. Bodenham Esq. 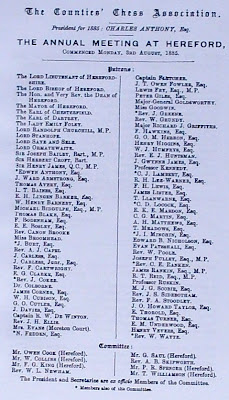 You can see his name half-way down in the left hand column. This can’t be Francis Lewis himself, as he died in 1876, but might be his son, also called Francis, who was born in 1820. We can’t be sure, as Hereford was awash with Bodenhams, including a whole village so-named a few miles to the north. The reports of the Congress mention a key gofer (he “devoted himself with his usual zeal and ability”) Thomas Smith, the Secretary of the local Hereford Chess Association. So, in 1885, as in 1812, and as now, Hereford had its chess club.

You can see what an impressive list of patrons lined up to support the 1885 Congress, including the Lord Lieutenant of Hereford, the Mayor, a brace of Earls and a bevy of Lords and Knights. Even Robert Peel, Conservative M.P. for Huntingdon chipped in a £1 subscription. But behind this display of support there was much gentlemanly politicking.

The Congress was organised in the twentieth year of the Counties’ Chess Association, the moving spirit of which was the Reverend Arthur Boland Skipworth, himself a decent chesser. 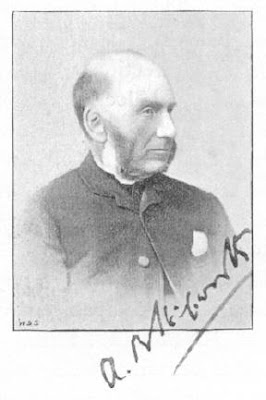 The CCA aimed to represent and organise amateur chess in the provinces and was very much the Reverend’s creature. He was mightily displeased by the pretensions of the rival, upstart, London-based British Chess Association which proposed also to organise chess meetings in the provinces, being so bold, as it did in October 1885, also to offer federation, as if of equal standing. This impudent suggestion Skipworth swatted away, loftily deeming it unworthy to put before the members of the CCA, let alone discuss.

Over my dead body would your writ run in the counties, he was telling the BCA, and in 1885, his clerical duties notwithstanding, a grand gesture was the order of the day. So, as well as running his 290 acre farm with a staff of ten souls, administrating the CCA, sitting on the Council of the BCA (as a kind of Trojan Horse), and playing quite a bit of chess (e.g. he lost a match +2-5=0 to Bird that same year) and, one supposes, delivering the odd sermon or two, he and the CCA organised the Hereford Congress, playing himself and finishing 7th in a field of 11.

Skipworth’s (sorry, that should read “the CCA’s”) prospectus for the tournament invited “Chess Masters from the different parts of the world” to enter. The “munificence of Mr. Anthony of Hereford” (a local big-wig) would underwrite their prize money. But otherwise individuals and clubs the length and breadth of the land were invited to subscribe to provide prizes for the parallel amateur competitions. To which the Chess Monthly, the organ of the BCA, sniffily declared itself “greatly averse” to these appeals for funds to enable “a few amateurs to exhibit their skills at chess in some provincial town”. Ouch. Sheffield beware.

The venue for the Congress was Green Dragon Hotel in Hereford, which is still there today.

Here the management considerately provided “separate little tables” for the pairs of players, and even an office for writing letters, and a board for displaying results: declared to be “decided improvements” on previous arrangements.

An endearing feature of the Congress was a chess problem setting competition in which the entries were accompanied by “mottos”, the most bizarre of which was this cod French effort: “Pas delle yeux Rhone que nous”, and you are on your tod working out what that means. These bons mots were attached to this three-mover. 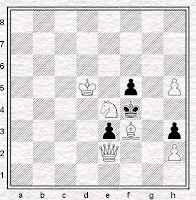 The line-up for the Masters tournament was shown in this photograph in the Illustrated London News: 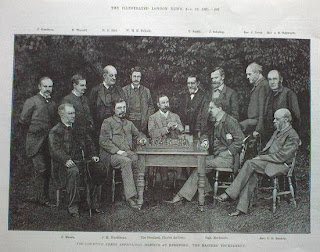 Back row, l. to r. : Gunsberg, Thorold, Bird, Pollock, Smith (Sec. HCA), Schallopp, Owen, Skipworth.
Front row, l. to r. : Mason, Blackburne, Anthony (Pres. HCA), Mackenzie, Ranken.
The eagle-eyed reader will note (a) the absence of Dr Tarrasch, who withdrew at the last moment, claiming that the prize monies were too skewed in favour of the winner and didn’t provide enough for the runners up. But perhaps he just didn’t fancy meeting Blackburne again, having blundered to a 22 move defeat against him in the Hamburg tournament the month before, and (b) no less than three Reverend Gentlemen: Owen, Ranken and Skipworth.

There was evidently a need to make up the numbers in the “international” Masters by inviting a number of home-grown strong amateurs to take part, including the three Reverends, a point the BCA’s Chess Monthly seized on for another snipe at the CCA.

But the number of men of the cloth is interesting in itself. In fact, among the participants in the various competitions of the Congress, and the Patrons and subscribers lists there are no less than twenty-three clerics, of whom seven played in the tournaments. They used to say that the Church of England was the Tory Party at prayer; the Hereford Congress looked like the C of E at play, not heeding the charge that they might be neglecting their pastoral duties. No worries! Giving them his blessing was a most prestigious Patron: the Lord Bishop of Hereford.

As for the chess, the Masters was notable for the christening of 1.f4 as “Bird’s Opening” courtesy of the Hereford Times, which reported, on the 8th August, “Mr. Bird with his own opening” beating Mr. Pollock, and “Mr. Thorold with Bird’s Opening…defeated by Mr Blackburne”. Helping to give the Congress legitimacy as an international tournament was Herr Schallopp of Germany: according to the British Chess Magazine “a very fine player, and withal a very nice man. He won golden opinions during the tourney, and if he had won first prize, his victory would have been hailed with delight”. Alas, he finished second equal with Bird, but was the only player to beat tournament victor Blackburne with this effort.

However, he took his eye off the ball in his game with Mr. Thorold, who flew the flag for the English amateur and defeated him. One wonders what the “very nice man” said to Thorold for depriving him of first prize and his hail of delight. You'll find the game here.

This game and others were annotated in various places, invariably by the amateurs. In the British Chess Magazine the Reverend Ranken offered his thoughts on the Thorold v Schallopp encounter, suggesting that instead of 10…Be6 “we see no objection to taking the QP, which we do not think Mr.Thorold ought to have abandoned”. Hmmm. 10…Qxd4 11. Qb3+ Kg7 12. Qf7+ Kh6 13. Bxf4+ Kh5 14.h3 looks pretty tasty to me, and I’d be pleased if someone’s computer agreed. 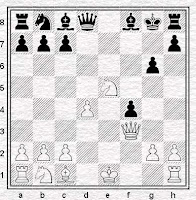 We see no objection
to taking the QP.
In 1898 the Reverend Skipworth went to answer to his maker as to whether chess had claimed more of his attention than had his flock, and the Counties’ Chess Association died with him. The field was now left clear for a single national chess body, the British Chess Federation, which arrived in 1904. Chess politics has never been as decorous since.


References
A. B. Skipworth (ed). The Book of the Counties’ Chess Association, Hereford 1885. Originally London 1886. Reprint Moravian Chess Publishing House. Contains reports given by the officers of the CCA.
Hereford Chess Association. Hereford in 1885 . Hereford 1985. Limited Edition. – with extracts from the British Chess Magazine 1885. Edited by Les Collard and Peter Johnston. Thanks to Les for depositing two copies with the Institute of Leeming Studies. Thanks also to Ray Collett for his briefing on the Congress. The Chess Monthly, Vol VI Sept. 1884 - Aug 1885.
P. W. Sergeant. A Century of British Chess (1934)
The ILN photo comes from here.

My computer agrees with you, claiming mate in 12 after 14.h3.

Many thanks for the wonderful series of articles. I must give Fritz a break from Thorold-Schallopp and return to entering Matthew T's 1992 RJCC games into ChessBase.

Thanks Richard. Herr Schallop would surely have been pleased that a program by the name of Fritz came to the same conclusion about the poisoned QP.

Pleased that you are enjoying the series!