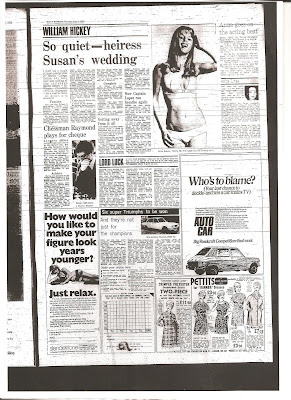 RAYMOND KEENE’S success could turn out to be Jim Slater’s loss. But the wily financier, I am certain, will cheerfully dip into his pocket to produce the £5,000 Keene is so near to claiming.

It was last year that Slater, a keen chess player, offered the money to the first Briton to become a chess Grand Master.

Keene, 25, who shared a landing with Prince Charles at Trinity, Cambridge, is now half-way there.

He has just competed in the Jubilee Chess Olympics in Nice – where he became the first British player to achieve Grand Master results.

He has to achieve those results again in another international tournament to earn the title – and the money.

“I very much hope that I will manage the win I need before next summer,” Keene says. “If I get the £5,000 I shall throw a huge international party for all my chess friends across the world.”

As well as aiming for a financial checkmate on Mr. Slater, Keene also has a personal move to play. He is soon to marry ballernina Annette Goodman, 20.

Surely impossible to see "William Hickey" without thinking of

In 1976 one of the magazines - CHESS I think, rather than the BCM - reported RDK holding a dinner to celebrate gaining the GM title. Amongst the guests were Tony Miles.

Did they have seconds?