The 2011 British Championships only opened a few days ago and yet by the end of today it will already be half over. That's life for you, I suppose. Blink and you've missed it.

I've barely had a chance to keep an eye on what's been going on, and when I scanned the lists of the entrants to Championship tournament, I was surprised to see half-a-dozen people that I'd played before. Most of these - Peter Lalic, Yang-Fan, George Salimbeni and Sarah Hegarty I met when they were much younger, and less strong, than they are now, but there are a couple of exceptions. One is Ravia Haria, who I played at the Gatwick Open just a couple of months ago and the other is Chino Atako.

I first crossed pawns with Chino at the Dutch Opening theme tournament that Simon Williams organised in Hastings at the begining of 2010 to celebrate the launch of his first DVD. As I recall he - Atako - played the Staunton Gambit against me, an eminently appropriate choice for somebody with his name, and gave me a good, if mercifully short, leathering (I mentioned the game in passing here).

The next and only other time our paths crossed was April of this year when we found ourselves on board seven of a Streatham & Brixton v Redhill Surrey League match. Funny to think that at as I write these words the person I played in that mundane club game is busy preparing himself for a clash with last year's British Champion and current world number 28, Mickey Adams. That is, nevertheless, exactly what is happening and Chino richly deserves his chance, having scored an excellent 2.5 points (wins against Ronan Magee and FM Laurence Webb, a draw against IM Andrew Ledger) from the first three rounds.

I'm not a big fan of the current format of the championship tournament, but it's certainly true that one of the strengths of the event is that every now and again it gives (if he will forgive me for the term) 'ordinary' club players like Chino a chance to take a pop and one of the big guns. The problem is that this feature of the tournament comes at a price and ultimately, although not only because of games like Atako-Adams, we risk the title being determined not by games played between the leading contenders, but rather by a comparison of how the top players score against the rest of the field. This wouldn't matter so much if the contenders played similar opposition, but often they do not.

IM Simon Ansell wrote on the EC Forum yesterday morning (as part of a discussion about the Accelerated Pairing rules that are being used),

... any system that, barring an exceptional set of results (there haven't been), results in the top two seeds on the same score playing two opponents 400 points apart, is fundamentally flawed imo

which seems hard to argue against. Similarly, if we're looking at discrepancies in how the pairings turn out, we might also point to the fact that IM Sue Lalic has played four Grandmasters while the GMs themselves have, for the most part, only had to take on one of their brothers thus far. Nosher (Conquest, Summerscale) and Conquest (Short, Jones) have played two each, it's true, but that is more than offset by Williams, Wells and Pert not yet having played any.

As Chris Kreuzer said on that same EC Forum thread,

With 12 GMs in the field, you would hope the leading GMs after 11 rounds would have played at least 7-8 other GMs *

and once again it's impossible to disagree with the sentiment. Once the tournament is over, an analysis of the number of all-GM clashes, the number of times that the people who placed first to tenth played the other top ten finishers and, in particular, the number of games that Adams, Short, Howell and The Corporal play against each other will go a long way to demonstrating how good at selecting a champion the current tournament actually is. Based on previous years, "not especially" is my guess.

Anyhoo, if we have doubts about the nature of the tournament it is perfectly possible to express them while also celebrating Chino Atako's achievement so far and the opportunity to play Mickey Adams that he has secured as a result. It is a huge slice of good fortune for him, perhaps, but certainly no fluke - witness, for example, the unbeaten 3.5/5 (including a draw with Simon Williams) that he scored at the Gatwick tournament mentioned above - and I wish him all the best for the game.

The game has now been played - and, needless to say, with the expected result. Still, I hope that Chino enjoyed his moment in the spotlight nevertheless.] 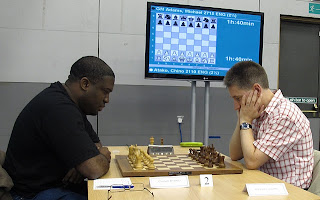 * Chris continued: "Though that depends on the GMs playing like, well, grandmasters", which is an entirely reasonable addendum.
Posted by Jonathan B at 8:00 am