What Dadd Did Later

In the last two posts, here and here, we explored the problems posed by the chess problem in The Child’s Problem painted by Richard Dadd R.A. in 1847 while he was detained at Her Majesty’s Pleasure in Bethlem Asylum.

In the first post we solved one problem: what was the chess problem? In the second we looked at the solution: the key move 1.Qd8! 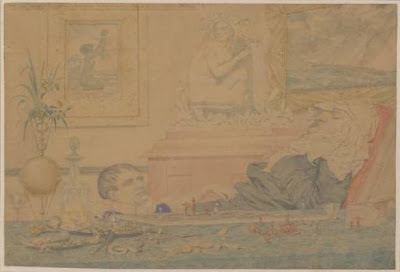 But there is another problem. We’ve touched on it already: could Dadd, an artist elected to the Royal Academy at the age of 20, admitted to Bethlem in 1844 at age of 27 (he was detained there and in Broadmoor for the rest of his 69 years), play chess well enough to compose a problem easy enough to be solved by a child, but which required a more adult intelligence to devise?

Let’s take a step back and look at chess in the Asylum. There is some remarkable evidence that it was a “popular pastime”, as the then Archivist at the Bethlem Royal Hospital put it in her 1974 book on Dadd's art. Just look at this fascinating image from the Illustrated London News of 31st March 1860. 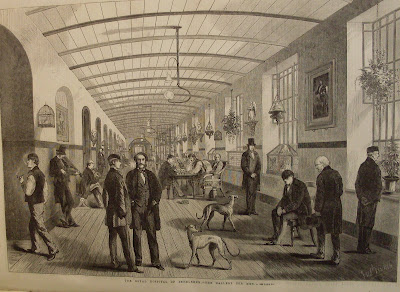 It comes with a report by George Augustus Sala of a Royal visit to the Hospital. It is worth reading in the original: 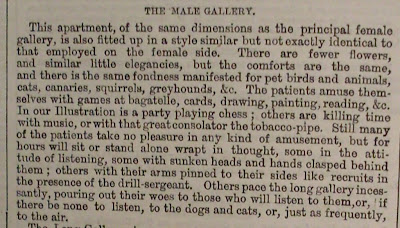 The "party playing chess" is at the back, and here they are in close-up: 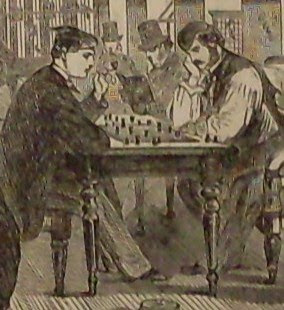 So yes, there was chess in the Asylum in the 19th Century, and not just in Bethlehem. Mr. Stevens, the Chief Archivist at the Berkshire Record Office (they hold the Broadmoor records), says that a chess set was standard issue in the Asylums of the time, for example "it was one of the first things provided at the old Berkshire County Asylum (later Fair Mile Hospital): cards, draughts, dominoes, bagatelle and chess sets were all purchased within its first year of opening in 1870". Bill Hartston’s famous quip that “chess doesn’t drive people mad, it keeps mad people sane" may have more literal truth than he realised.


As for Dadd himself , we discussed last time his interesting ideas about the game. Doctor Orange noted, for example, Dadd’s theory, eccentric as it may have been, as to why some people couldn't play: it was because the pieces, steeped in antiquity, didn't like them. But if Dadd could play, how well did he play? Step up Edward Oxford (1822 -1900) another “pleasure man” at Bethlem, to help us get things in perspective.

Oxford's undoing befell him on the 10th June 1840, when he was only eighteen. He attempted to assassinate Queen Victoria and Prince Albert no less, and he was subsequently detained in Bethlem at Her Majesty’s Pleasure (hence the soubriquet). 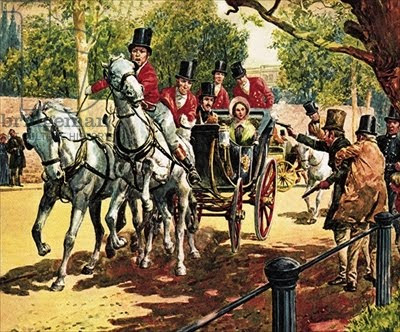 Eduardo Sadier described Dadd’s story to me, involving as it did patricide at the behest of an ancient Egyptian God of the Underworld, as “wonderful and terrible”. It is as Gothic as it gets. But Oxford's brush with regicide (reginicide?) runs him close.

The two guns he discharged in direction of the Monarch and her consort weren’t loaded, and no bullets were ever found. Apprehended on the spot he was presumably wrestled to the ground, tabloid style. He was heard exclaiming all the while “it was me..!” At his trial for High Treason a successful defence of insanity was mounted on his behalf, with convincing evidence coming from his family and the best medics in the land.

In Bethlem from 1840 he learnt languages, painted and was a model prisoner, so much so that the Bethlem authorities were sorry to see him transferred to Broadmoor in 1860, and there he came to be recognised as sane. He was declared medically such in 1864, and eventually a Home Secretary, with no other axe to grind, signed his release in 1867. That’s after 27 years inside.

As a condition of his freedom Oxford had to agree to permanent exile in Australia, and to there he was shipped on HMS Suffolk. Thereafter the trail gets vague, but there are suggestions he was variously a petty thief, married, published a book (the Lights and Shadows of Melbourne Life , albeit under the name of "John Freeman"), and worked as a house-painter (a skill he'd learned inside). He died maybe at the turn of the century (this account relies entirely on Berkshire Records Office Chief Archivist Mark Stevens' note in Inside Victorian Broadmoor).

And what is the relevance of this? Firstly, not only was Oxford in Bethlem at the same time as Dadd, but it is a safe assumption (according to Colin Gale, current Archivist at Bethlem) that he was on the same ward for the criminally insane. Secondly, and significantly for our purposes, his Doctor’s notes say “he plays chess and draughts better than any other patient”. Better, in other words, than Dadd.

Extract from original notes on Edward Oxford, February 16th 1854,
by kind permission of the Bethlem Royal Hospital Museum and Archive.

So, without any other evidence whatsoever, and because fact may be stranger than fiction (or the other way round), how about this as a good story: Richard Dadd needs a chess position for his painting and asks Edward Oxford, the best chess player in the company, for help, and of course he obliges. Oxford, recalling that he had nothing personal against Queen Victoria (“I may as well shoot her as anybody else” he said at the time of the "shooting"), and to show he still harbours no hard feelings towards her, devises a puzzle wherein the White Queen has the key move.

It's child play, really. The sort of thing you might expect to find in Madame de Saint Pierre’s imaginative novel about Dadd's life, mentioned in the previous post.

There’s yet more Dadd, and chess in the Asylum, to follow.

Acknowledgements
Thanks again to Mark Stevens at the Berkshire Record Office; and Colin Gale at Bethlem Royal Hospital Archive and Museum, for permission to source the Illustrated London News material, and the medical notes on Oxford.