Chessabit: One, Two, and (Soon) Three 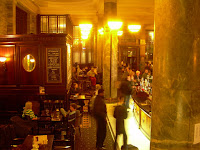 Chessabit held their second one day rapid event at the beginning of this month. Jerry Bloom from Hackney Chess Club was the outright winner, with 7½/9. I finished in the chasing pack on 7/9: Second place, you might think. But alas a statistical tie-break put me out of the money prizes, that went instead to Peter Ackley (second) and David Haydon (third.) The fact I beat Haydon in the final round didn't count for much either, since the tie-break used was apparently the 'Median Buchholz' - which ignores the result of one's highest placed opponent. Ho hum. 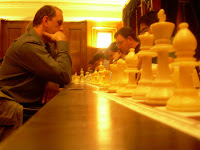 Still - it was a fun and interesting day in a pleasant venue (pictured.) Two other Streatham & Brixton Chess Club players took part - Adam W, and James who emailed me for this report to say: "I will definitely play again. It's a great addition to the London chess scene, the organisers are great." Well, the good news for James and others interested is the wait won't be too long. The Third Chessabit Rapid Tournament is coming up on January 20th, at The Crosse Keys pub again in central London. First Prize once again is £500, whilst the number of rounds seems to have been reduced from 9 to 8. Entry stuff here.

Anything else? Well, you'll find my first report on Chessabit here, and this is my second. And don't forget The Richmond Rapid on the 7th too (preview here.) Finally, below you should find two of my games from the event - playing through them ought give you an idea of the standard. The David Haydon game took quite a few more moves to finish - but the result is already clear where the fragment ends.