Streatham & Brixton Chess Club's second team faced a tough London League third division match against Albany on the 23rd. On the night the score was 5-3 to them with two adjournments. But when I spoke to my opponent on the phone to arrange a resumption date, he told me that his sealed move was 37. Ne2. That was enough for me to resign, since five minutes with Fritz had confirmed to me already the impression I had on the night: his attack would then cost me a rook. So, we lost the match. Congratulations to Albany though, who have been fielding a consistently strong team this year and are currently unbeaten. They look hot favourites for promotion, as can be seen from the Division Three Table.

I had more luck for the first team last night in our match against Wimbledon - luck being the operative word. After a completely unclear middle-game, we reached this position: 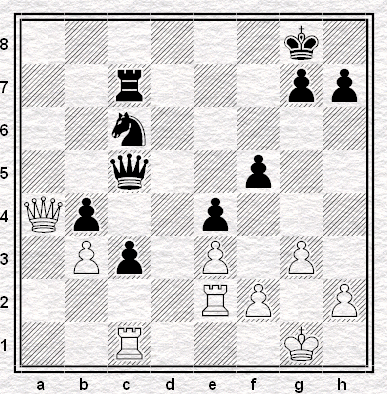 Here my opponent blundered with 33. R2c2?? I'm sure you can spot the instant win I had then. A full report on that match will follow later, in a separate post.

Oh, btw. If you're tired of seeing little incidents from my games (how dare you!) then feel free to send me your games for publication - or interesting positions from them.
Posted by Tom Chivers at 9:05 am

Nice one Tom.It was quite a night for people losing their queens. Steve Ledger gave up his for rook and bishop, much against his better judgment, and lost. Adam F-F did have much alternative either, but his opponent was fixated on Adam's king in the top left hand corner, while a pawn was rolling down towards him in the bottom right, which is where Adam's queen reappeared like a rabbit out of the hat - just like one of Jonathan's conjuring tricks.

It was quite a dramatic evening chess-wise I guess. I think I even saw a Schliemann Gambit versus the Spanish, no less . . .

Adam F-F has said he'll send me some of his fun game. So I'll write up my post on it when he does that.