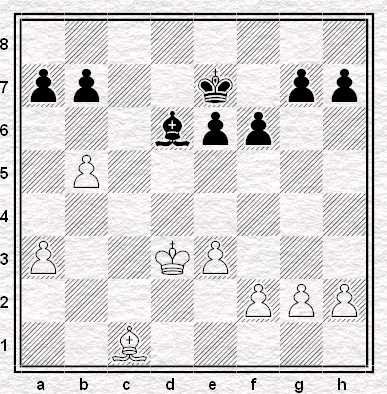 Do you recognise this position?

I’m betting that a fair few people will know it’s taken from the first game of the Fischer – Spassky match in 1972.

Spassky, playing White, had just exchanged a pair of knights on d6 and after Fischer recaptured with the bishop, pushed his pawn to b5. What happened next was so shocking that journalists still wanted to ask Fischer about it 20 years later.


The genius that is Bobby came up with …

and after Spassky replied with the far from difficult to spot

the bishop was trapped.


What’s so incredible about this blunder is that it’s exactly the sort of move an early chess computer would play. It sees the bishop will be trapped but the number of moves it takes to actually capture it is beyond the machine’s ability to calculate (the ‘horizon effect’) and as a result evaluates the position as better for Black because he will be material up as far as the computer can reach in its analysis.

But Fischer was no silicon muppet so what happened?

(leaving the pawn isolated and weak)

on the grounds that

leaves Black a pawn up. Unfortunately for Fischer, 35. Bd2 traps the bishop for real.


In the game after 32. Kf3 Bobby tried …Ke7 and apparently this position is still just about drawn but he blundered again the move before the time control and eventually resigned on move 56.

So … Bxh2 turned a certain draw into a very difficult one. Although it had a significant effect on the game the same can’t really be said about the match. Fischer famously failed to turn up for the next game so he effectively gave Spassky a two point head start. Nevertheless by game 6 Fischer was already in front and by game 13 he had stretched his advantage to 6-3. Several draws followed before Fischer wrapped the match up with victory in game 21. There was no way Fischer was ever going to lose to Spassky regardless of how many points he blundered away.

Not much value there then but the real genius behind the blunder is finding it in the first place. It’s just so completely unnecessary it’s beautiful. I’d love to know how long Fischer thought before moving. You might have thought that, playing in his first title match, Fischer would have paused to check whether the World Champion really had just left a pawn en prise – but we can all be grateful that he didn’t.

That gives Fischer an Ultimate Blunder Rating of 11.5 and leaves him comfortably ahead of Topalov, which is probably as it should be. There are still plenty more blunders to work through though.

Next time … double trouble.
Posted by Jonathan B at 9:17 pm

I've always found piece-trapping tactics very hard to spot - I have to make a conscious effort to check for them. I guess Bd2 is quite subtle here, as well.