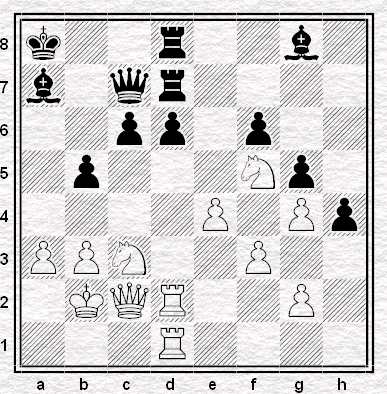 "Was it Wimbledon v Streatham, Wimbledon v Watford, Watford v Streatham, or Watford v Watford?" writes Martin about our London League Division 1 match on 30th November. "It was impossible to tell. Everyone seemed to know everyone else and had played each other a hundred times before - all very convivial, but it didn't stop the slugfest."

Well, I'll solve the mystery. It was Streatham 1 versus Wimbledon 1. And, indeed a slugfest it was. The score of that match currently stands at 5½-5½ - with only three draws amongst all that. I blogged the finish of my game from the evening here - while the match will be decided by Adam W's adjourned game.

The above position is taken from Adam F-F's game on the evening. He had black against Mark J Dubey on board 5, and describes the action as follows:

After a dull ‘strategic’ game we were both down to around 15 minutes left to complete the game. I made an error on my previous move, leaving us in the above position. Can you spot White’s move? 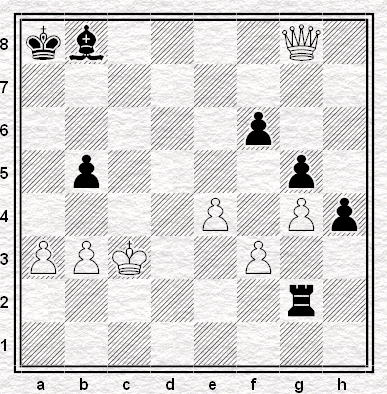 Now the smoke has cleared and White has a winning endgame, but with little time and an annoying passed h-pawn to deal with, can he convert it? If there were one more pair of pieces on the board he could ‘play for mate’, but the queen can’t do it alone. At least he has a draw ‘in hand’…

Meanwhile, Richard sent me a brief note about our Croydon League Second Team: "We lost night’s match at Dulwich. It stands 3-0 to them, but hopefully we will avoid the whitewash as Jonathan has much the better of things in his adjourned position."