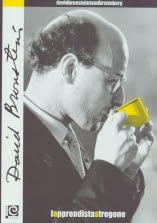 David Bronstein died on Tuesday. I am not really knowledgable enough to write much about this sad news, or about his remarkable life and chess career. So instead, here are some quotes and links:

"David Bronstein was both an outstanding chess player and an excellent writer. Furthermore he was one of the most beautiful players of the twentieth century, always looking for the beauty in chess. Where Botwinnik saw chess as science, Bronstein considered it to be art. And of course it was Bronstein who wrote one of the true classics in chess literature: Zurich International Chess Tournament 1953. Enough reasons to pay tribute to David Ionovich Bronstein." - Doggers-Schaak in memoriam.

"He came within one draw of becoming world champion, and was one of the strongest players in history to not win the title. David Ionovich Bronstein was a remarkable creative genius and a master of scintillating tactics that enthralled the chess world for many decades." - Frederic Friedel, ChessBase obituary.

"In the year's I have been compiling TWIC there has only been one death of comparible stature, that of Mikhail Botvinnik in 1995. I have raked over his [Bronstein's] results and achievements without I think quite getting to the essence of why the man was so important and great. When he emerged he was to that generation as Tal and Fischer were to the next or the young Kasparov was to me. He brought something new and exciting to the game and he took that ability right to the very top and in doing so he actually influenced how a generation played." - Mark Crowther's appreciation of Bronstein.

Leonard Barden in The Guardian has also written a good obituary, here. Worth a read, eg.

He always insisted that he had no followers - "No one looks at chess like I did" . . .

GM Nigel Davies's memories of Bronstein are especially worth a click.

The death of David Bronstein brings with it the death of art in chess. He was the only great player to value and pursue the 'imaginative path' in chess. He once said chess is imagination.
This approach today would be anathema, with it's emphasis on winning, but in Bronstein's time an irrevelance to the real essence of chess -to pursue beauty - something not to be found in the result.
Bronstein discovered that chess far from being a war game, was a friendly game. In such circumstances, it was possible for your opponent to become connected to your thinking through the beauty of chess, especially in trying to unravel the truth as the game unfolded.
Bronstein's moves seemed effortless compared with the pedantry of a Fritz. His calmness and use of artistry brought a new understanding to chess, which if we are not careful will die with him.

It's intriguing to me you find Bronstein's play truth-seeking and beautiful. To me - his best games are a complete mystery. The famous sacrificial win against Keres, for instance, makes me wonder if I understand anything of chess at all. Perhaps I am just excluded from a higher level - yet, the moniker of sorcerer might imply I am not alone in the fog.

Btw - I actually ended my piece with the quote 'Chess is imagination'. Since you don't seem aware of this, I guess you only scanned the post and primarily wanted to get out your opinion.

If so - it makes me think that you should consider getting your own blog or webspace to publish your insights for a wider audience. After all, your audience here in the comments of an archived post is probably . . . one! Yet your comment was well worth reading. Actually, I've googled your name and have found some other stuff of yours: you write very well and interestingly indeed.

On which note, it's not complex or hard to do this kind of thing. Blogspot - that hosts our blog - is free and does a lot of the nitty-gritty for you. Let me know if you follow my suggestion.

"Bronstein was the last of the truly individual chess artists, who will also be remembered as the friendliest of men."