Ronan Bennett and the curious case of the missing zugzwang

I've been reading Ronan Bennett's novel Zugzwang (Bloomsbury, 2007) for a review in a future Kingpin. Hopefully I shall be reviewing it in conjunction with Michael Chabon's The Yiddish Policemen's Union - since the two novels share, in chess, a major theme - provided the latter item, almost as late in arriving as the average issue of Kingpin, ever reaches me. (I don't know. However slow the post in the old Soviet Union, I still reckon the Chabon might have travelled faster between Dnepropretrovsk and Minsk than it has between England and Spain.) My thanks, therefore, to Jon Manley of Kingpin for allowing me to use, in this posting, material provided for use in his magazine.

Writing for a chess magazine, the aspect of the books that must concern me most is their chess content: how chess is presented, how it is explained, whether it seems to me accurate, whether it seems to me to communicate to the reader what chess is and what sort of a struggle one undergoes when playing it. And perhaps to see how a novel, in which chess is depicted, is read by somebody with a good understanding of chess.

But in the case of Zugzwang, chess is not only depicted, it plays a sizeable role in the novel: indeed, it provides its central theme, which is accurately and usefully defined by the author:

Derived from the German, Zug (move) + Zwang (compulsion, obligation). In chess it is used to decribe a position in which a player is reduced to a state of utter helplessness. He is obliged to move, but every move only makes his position worse.

Thus can be described the situation in which the novel's chief protagonist, the St Petersburg psychiatrist Otto Spethmann, finds himself as the plot unfolds. Despite his many travails, including a spell in prison and several attempts on his life, he is, nevertheless, occasionally able to pursue a game of chess with his friend, the pianist Reuven Kopelzon, a game in which the theme of zugzwang plays a decisive role. According to Bennett, who writes a Guardian chess column jointly with Danny King, "the game bears a remarkable similarity to King-Sokolov, Swiss Team Championship, 2000" - a small inexactitude, as it happens, since there are two Sokolovs among top-level chessplayers and it is therefore conventional to append their distinguishing initial, in this instance A for Andrei. But it is a very minor error. It doesn't misinform or mislead.

The same cannot be said, though, about some of the diagrams that accompany the novel, showing us the closing stages of the game. Two of these were spotted by the journalist Stephen Poole, who reviewed Zugzwang for the Guardian:

unfortunately near the end the publishers have allowed two of the chess diagrams to become decoupled from the positions stated in the captions.

I give one of these below, taken from page 226. 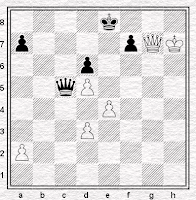 It is captioned: After 46...Qc7. Can Spethmann win the all-important f-pawn?

As can be seen at a glance, the queen is not on c7 but stands on a different square entirely. Moreover, if the reader has been following the game, all the pieces save the Black king will seem misplaced - which is probably because the diagram actually appears to show the position after 44.Qg7! The other diagram to which Poole refers, on page 196, is - for my money - even worse, claiming Black has just moved, even though his king is actually in check, delivered by the white queen. The queen, for its part, is unprotected and on an adjacent square, having apparently placed itself en prise for no obvious reason.

I say "at a glance" advisedly, because that is how easy it is to see that the diagrams are wrong, and how easy, therefore, it should have been to put them right. One must be fair: it is not trivially simple to get a diagram right, as I have found out to my cost more than once on this very blog when I have had to correct a diagram after publication. Even in professionally-published chess books, errors in diagrams are far from unknown. But diagrams with explanatory captions, which must surely have been seen by writer, editor and proof-reader, in a respected publishing house - yet simple errors remained uncorrected? It's not good, to put it at its mildest. I think it matters, too - it is as if a map were included labelling England as Scotland and Scotland as England, or if a photo of Harold Wilson were to be captioned Charles De Gaulle. It is an error of that order.

Still, as I say, these errors have been pointed out at least once in reviews. But to my knowledge, no reviewer has yet drawn attention to the strange claim that the second of two diagrams on page 261 shows Kopelzon in zugzwang - when plainly it does not. 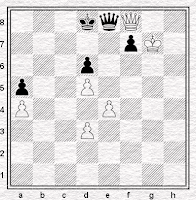 The caption: After 52.Kg7. Black is in zugzwang. Whatever Kopelzon does, he will lose the f7-pawn, and with it the game.

The position is at least correct, and the second part of the statement is as well, but the first, very obviously, is not. The cause of Sokolov/Koplezon's defeat is not his compulsion to move, nor does that compulsion oblige him to relinquish the defence of anything that is currently defended. Because the f-pawn is not, as it stands, defended: or put another way, it is attacked twice and only defended once. No other piece can come to its defence, nor can it save itself by moving. It is already lost. If it were White's move he could proceed to take it, though in fact there are faster ways to win, one being to exchange queens (after which either d4+e5 or Kf6 will do the job) and another being to take the d6 pawn with check and then exchange queens.

Zugzwang it is not, so why label it as such? Anyone who does not play chess and yet tried to understand the idea of zugzwang from the diagram and its caption would either fail entirely to do so, or would gain a false understanding of what it is. Anyone who does play chess will do well, I think, to confine their response to the raising of an eyebrow.

It cannot, however, be right to present examples which are simply wrong. Which purport to demonstrate a concept which simply is not present in the example presented. At best, they can only confuse the reader. At worst, they sow the suspicion that the concept is not understood by the very writer who is expounding it.

In a novel which is built around this very concept, this is particularly unfortunate. It is, however, easily remedied. One trusts that all the errors mentioned here will have been put right when the paperback is issued*.

"According to Bennett, who writes a Guardian chess column jointly with Danny King...."

Guardian used to have two chess columns. A crap one and a good one by Nigel Short (I didn't always agree with, or like, what he said but at least it was interesting) .

Unfortunately they got rid of both and replaced them with something extremely mediocre. A fact probably not unconnected to the main qualification RB had for getting job being a family connection to the newspaper.

Well, the paperback is out. I saw a copy of it in a bookshop last week. I might have picked it up to look further but I was in a hurry and somehow read the author as being Rowan Pelling… There is also a shorter version of the novel available online but, when I glanced, I didn’t see any chess diagrams.

One thing I’d like to know more about is the plot and the role the chess game and the positions from it play… Does the book hinge on diagrammed ‘zugzwang’ position being a zugzwang position?

Also, I have a slight quibble about the quoted definition of zugzwang. I think the sentence ‘In chess it is used to describe a position in which a player is reduced to a state of utter helplessness’ might be more precise if the words ‘type of’ were inserted before ‘position’.

Also, you can be helpless without being in zugzwang...

The novel does depend on there being a position of zugzwang: luckily there is one, diagrammed and also labelled "zugzwang", in the novel, right before the diagram cited in this post. I've reproduced the two positions in question here.

Bennett actually gets it right in the text, but wrong in the second caption.

The first of the diagrams is liable to be the subject of a posting next week.

Didn't know the paperback was out - I got sent a hardback so I assumed we were still waiting!

Very interesting... I picked up the book in Faro airport and finished it just recently.

I have to say, I noticed one diagram that you discuss, but was even more confused by the one purporting to be Lasker - "Rozental" ( evidently Akiva Rubinstein, who shoul be highly aggreived to be be presented as the evidently distburbed Rozental ).

After the diagram o page 247 ( showing the position after 60.b3 ) a following paragraph states "Looking back, I saw Lasker taking the knight on d2 with his queen".
Damned confusing, since there is no knight on d2 in the diagram ! ( and indeed looking at the real game of Lasker - Rubinstein, the last knight left the board at move 14 :)

I found that diagram more confusing than any other, and kept going back to it to see if there was a faint knight imprint somewhere !!

The book wasn't bad, though.

Decent plot, fair use of chess, and even the sex scenes ( though probably not needed ) didn't qualify as 'bad sex'.

One good thing : it made me search for the original games and I'll have an interesting look at them !

Years later :-) I accidentally lent the book in a lib.

It's a pity for the three mistaken diagrams. The Zugzwang position was with pawn still on a2 and a7, kings on e8 and g8. queens on e7 and g7. (After the fine move Qh6, black had to play Qe7 and then followed Qg7).

The book itself was certainly not bad. Hopefully there will be an edition with correct diagrams and without the distracting comments under the diagrams.