How to play like Bobby Fischer without even trying

It would have been Bobby's sixty-fifth birthday last Sunday, had he lived to see it. Last weekend, then, was a fit time for a tribute. And what greater tribute to a chessplayer than the repetition of their moves? This is surely why we name opening variations after the greats who devised them and employed them. This is why we celebrate those rare, too rare occasions when we are able to follow directly in the footsetps of the greats and find the moves they found.

But can you play a whole game in the style of Bobby Fischer? A whole game, indeed, in which you play exactly as Bobby did? On Saturday, when Casino Jaque of Huesca lined up against Stadium Casablanca B of Zaragoza in the Aragon Team Championship, I had the opportunity to do just that.

When the away side arrived they had only three players to our four, the missing player being their top board, Antonio Campos Hernández, and we were told that he wasn't going to turn up. In one sense this was a disappointment, as all defaults are: I wasn't going to get a game. In another, though, not so, since he is graded eighty Elo points above me, and we needed to win the match after a disaster the week before. I had to wait the usual hour: never mind, there was a match on the telly (Liverpool against a Newcastle defence not more obviously present than my opponent) and it is only a short walk home. I had White. I had to play a move, hit the clock and then go and park myself in front of the telly for a bit.

It was then that I had my inspiration. This was my opportunity for a tribute, for a recreation of one of Bobby's swiftest and most controversial triumphs. Palma de Mallorca, 1970 - the twenty-third round of the Interzonal, when Fischer defeated Panno after just one move. I remembered the game. I remembered exactly how it went. So I played the same move that the great Bobby Fischer chose on a similar occasion - 1.c4. I punched my clock and left the board to the company of two extra chairs. 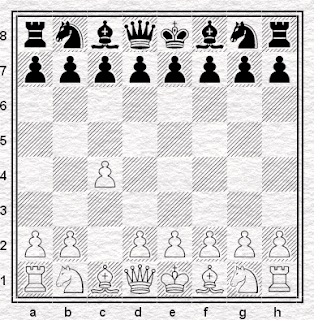 When the hour had elapsed, I claimed the game, and signed the scoresheet. My tribute was complete. A Fischer game in full. Granted, a minature - but a complete game nevertheless.

Purists may object that in the earlier game, Panno actually came to the board and resigned, a few minutes before his hour had elapsed: whereas no such thing occurred in my game on Saturday. I do not care. At worst, it is a minor flaw. The moves remain the same. It is my Fischer game. I think of it as my hommage.

In fact, if you default a white game, you can play like Fischer without even turning up!

"Uncommon Opening"? If only!