The Board Beside Me 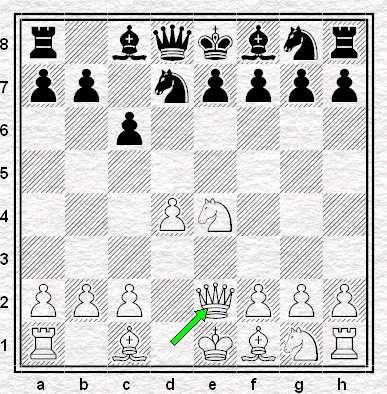 Some several million years ago, when I used to write for When Saturday Comes, there used to be a feature called The Bloke Behind Me. The idea was that when you're at a match, there's always some bloke saying something stupid, clever or amusing in a voice loud enough for everybody to hear: and the bloke is always standing (as we did, then) directly behind you. Every month readers would write in saying what TBBM had just yelled when standing directly behind them.

I'm not sure any of these were so funny that I can remember them at this distance: but you get the idea. Anyway, over time I moved into the mainstream - from football into chess - and now The Bloke Behind Me becomes The Board Beside Me, where something is always happening that is madder than what's been happening on your own.

Had this blog been going before I emigrated, this would probably have been a weekly feature all about Robin Haldane's games for S&B: due to the closeness of our grades we usually played on adjacent boards, Robin normally taking the one directly above my own (if you can be above as well as beside). After about half-an-hour, while I was quite likely still in theory and aiming for a tranquil equality, I would look at Robin's game - and he would have sacrificed two pawns for compensation which amounted to no more than having two pawns fewer than his opponent to worry about. I'd avert my horrified eyes until my game was over - by which time Robin would either have won his game or extricated himself from danger in the Haldane Ending (which is always a draw, despite Robin's opponent being material ahead, having bishop for knight and putting a rook on the seventh rank). The Board Beside Me was always a far stranger place than my own.

It was never, though, quite so strange as it was last Saturday, when I was playing on board two in the championship of Huesca Province, looking at the Black side of a MacCutcheon French in its early stages: immediately to my left, the joint leader, Sergio Alsina, was playing Black against José Luis Pellicer: I noticed that Alsina had played 4...Nd7 in the main line of the Caro-Kann and after that, I turned my attention to my own board. Then I heard laughter - or it might have been a cry of shock, or maybe both - from immediately to my left: on the board I could see a knight on d6, Pellicer having played it there on his sixth move after moving his queen to e2 on his fifth.

Immediately I realised what Alsina had done on his fifth move: I'd seen that trap any number of times before, though always in a book, never actually on a real board in a real game. I started laughing too, as did the loser of the game, as did my opponent, as did everybody else, after coming over to look at what had happened. Mate in six moves: in thirty years of competitive chess I don't think I've seen anything quite like it.

The Haldane Endgame isn't always a draw --- I sat next to Robin last week where he swindled a win a pawn down in a rook endgame! Will I be the next to emigrate?

I know an adult 1600 player in the USA, naturally un-named, who fell into that trap *twice* in rated play. (In those days 40 moves in an hour was fast.) After that, if you played 5.Qe2 against him in blitz he would talk to himself about the threat. And even in slow games he took to playing ...Ndf6 in random Caro-Kann positions. The scalded cat fears the water.

Isn't Qe2 just a bad move if your opponent doesn't fall in to the trap though?

I'd guess it is unlikely to be the optimum move in the position . . . but I'm not sure it qualifies as 'bad' though.

I was thinking he was blocking in his King's bishop, but I suppose he can fianchetto - might try it myself.

I've just looked this line up on the Shredder opening database, and there is a game on there which goes 5 Qe2 Ngf6 6Nxf6+?? Very strange!

To secure the draw in as timely a fashion as possible isn't it?

Ah, that may be a forthcoming item...or even a series...

Hurry with the next article, call me sad but I am having seriously withdrawal symptoms.