When would you resign?

One regular humiliation for amateur chess spectators - or at least, for the one currently writing - is to look at the final position of Master games and think, um, why did he resign?
And fittingly, both FIDE Masters I've beaten (the only Masters I've beaten) have resigned in positions I wouldn't have resigned in myself. Is this, I wonder, due to their superior understanding and trust in their opponent's technique and accuracy? And thus conversely, is the reason I wouldn't have resigned due to my own lack of insight into when a position is actually clearly lost? Or are there other reasons? I'm not sure. Let's take a look.
The first position is from January from this year, and my opponent with the black pieces resigned here: 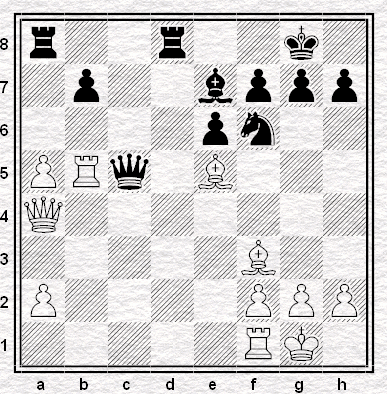 Now, it's true I was fairly confident that after 22... Qa3 23. Qxa3 Bxa3 24. Bxb7 Ra7 25. a6 I would be able to play for a win based not so much on the extra pawn, but on the trapped nature of his rook on a7. I was fairly sure that the win was just a case of managing to attack the thing with my dark-squared bishop, in fact. However, when I briefly analyzed it with a computer after, it wasn't so obvious that I could have managed that - and trying to do so might have allowed him to wriggle out by, for instance, trying to exchange his knight for the b7 bishop. But none of that mattered, because my opponent resigned. Should he have played on?
The second position is from my game last night in our London League match against Athenauem. My opponent had the white pieces and resigned here: 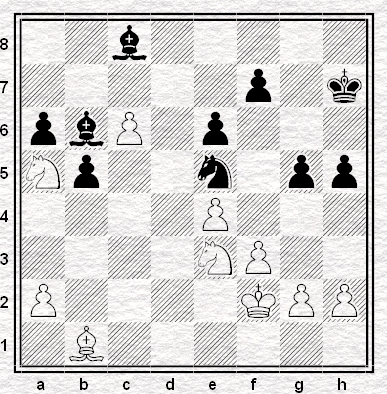 The white knight on a5 is attacked and has to move. At first glance it looks as if wherever it goes, then 39...Nc4 just wins the other knight, pinned on e3.
However, this is not the case and as my opponent held out his hand, I was still trying to work out what I'd do after 39.Nb7 Nc4 40.e5+ Kg7 41.Nd6, which saves the piece because the c8 bishop is trapped, one way or another. Now, black should still win this just by gobbling some pawns (the computer tells me) but there are also certain clear ways for black to go wrong; in particular after 41...Bxe3+ 42.Ke2 Nxd6? 43.exd6 a draw suddenly looks like a plausible result due to the opposite coloured bishops. So should he have played on, at least to make sure I avoided this? I would have.
And what about you, dear reader. Would you have resigned both of these positions? Either? Neither?
Posted by Tom Chivers at 10:05 am

Being far weaker than you I wouldn't have resigned either and played on the in hope of an error. I've never resigned a game that I wasn't about to be checkmated in, though I'm not sure it is good form I have learned alot along the way.

I sometimes resign early when thoroughly pissed off: that probably seeems a little OTT to some people but I know how my head works by now and sometimes I just need to resign and get out of there.

Other than that - I dunno. I might have resigned the second position if I hadn't seen the trick, but I suepct that I would have played out the next few moves, just to look at the position we got to. I wouldn't have gone on for very long though.

I usually ask myself the following question of my opponent's position before resigning:

"Have I ever managed to cock it up from such a good position?"

If the answer is no - that even I have never blown it whilst being that far ahead - then I resign.

I had an adjournment last season where Fritz evaluated my opponent's best 3 alternatives at over +6.5 to him, and I was contemplating ringing him up to resign. Instead I played on, my opponent had actually sealed a moved that wasn't even in Fritz's top 10, and I went on to win.

Apologies in advance to anyone reading this who finds they have to almost mate me before I quit.

As far as sealed moves are concerned, in pure playing terms it's always worth finding out what they are before resigning. (Of course, in other terms it's not, which is one reason why I don't really agree with the practice in club chess.)

I would guess that your opponent in the second game missed the line you give.

Anyway sometimes the bar is just a better option...

If you play the game for enjoyment (and the match doesn't hang on your result) then why continue in a position which doesn't give any enjoyment? Especially if you'll probably lose anyway.

I've said this before, but more than fifteen years ago I came into work on a Tuesday morning after having gone to the chess club on Monday evening.

"Did you enjoy yourself?" asked a colleague.

"I never enjoy myself playing chess", I replied.

"So why do you do it?" she asked, not entirely unreasonably.

I didn't have an answer then: I supect, now, that the answer may even be "to look for an answer to that very question".

You should give up for a couple of years. Break the cycle.

Totally empathise with the comment about not enjoying it. For me it was purely the competitive aspect about trying to get a higher rating etc, once Id stagnated in the mid 180's / low 190's for a few years I just had to give up. There was no reason to play anymore.

I wish the occaisional under 15 year old that I play would resign a bit earlier. Two pieces down or even a Queen down and some of them will not resign.

Also I thought Kramnik resigned his
last game too early without giving
Anand a chance to be extra nervous, as he was not yet past the winning post.

Small correction, Kramnik offered a
draw in the last game of the World Championship, although he was resigning the match. I thought it was a bit premature as well.

Well, he had no play left and Anand was better.

Talking about the Athenaeum match, I was gobsmacked to see Jones playing in London the day after the end of the Olympiad.

Along with Howell winning the British Rapidplay Chp last weekend, I admire the amount of energy these guys have.

I imagine Short and Adams are still recovering.

He wasn't playing very well though. He went a pawn down in the middlegame and ended up in an almost certainly lost endgame . . . where he was then lucky that time trouble got the better of his opponent.