What didn't happen next? 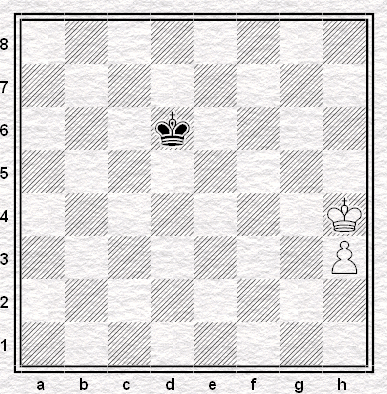 It is, deservedly, a not-very-well-known fact that I wrote my Masters thesis on chess. Moving Too Fast? Aspects of information overload and the study of opening theory in chess, submitted at the University of Northumbria in 2001 for an M.A. in Information and Library Management. (I was one percentage point short of a Distinction: something typical about that, I think.)

Anyway, the general thrust of the thesis was that while information technology in chess was great news for the amateur, because it vastly increased our access to information, it was more of a burden than a boon for the professional, because it increased the amount of work they had to do. I was mostly thinking, as the title of the thesis suggests, of the likelihood that increased access to the lastest games merely means that professionals have to work harder to keep up with opening theory. But there are other aspects, too, to illustrate the principle that information technology, rather than saving us work, tends if anything to increase it.

I don't know if this is found at all strange by people much younger than I: and given how many people now work in information technology, the idea that there might be some sort of distinction between the two is probably antiquated in itself. But I remember such terms as "labour-saving devices" and I also remember that, when I was a child, we were invited to expect a future in which the machines, and computers especially, liberated us from much of our more onerous toil and ushered in an era of leisure. Except in the sense that many of us spend hours accessing the internet when we should be working, this didn't really happen. It's far from an original observation, but the major consequence of the computers is that they generate more work: if you sent a letter you could expect to wait two days before having to receive a reply and act on it, whereas if you send an email you get a swift reply and the extra work is on your desk before your cup of tea.

Another reason they generate work - at least as much work as they save - is that in order to know that they work properly, to be able to check their work, you have to know the job yourself. Otherwise they may get it wrong, or they may break down leaving nobody else to the job, or they may conspire together to take over the world and reduce humanity to slavery. A cheerful thought for a Saturday, but then again, when you support Oxford United, that's as cheerful as Saturdays get.

Manouevering, very slowly indeed, back to the subject of chess, our position at the top of the column is from the game Gawain Jones-Rasmussen, England v Denmark, Dresden Olympiad round two: it may well be the final position, though the score of the game argues otherwise. I wouldn't have noticed any possible discrepancy had I not received an email from Angus French, shortly after the game had ended, doubting that the move recorded, 61...Ke5, had actually been played. (Angus was kind enough to assume that I could work out why: I'll pass on his favour to our readers.) 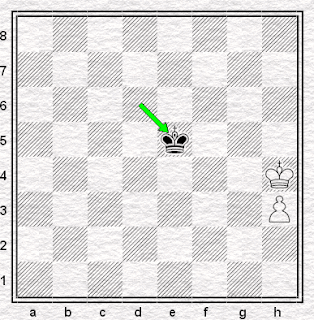 I still don't know, for sure, what the last move of the game actually was. I'm assuming it wasn't 61...Ke5 because as far as I'm aware, nobody's been posting on the Web "OMG Jones agreed a draw in a winning position" or anything to that effect. On the other hand, if the last move was Jones' capture on h4, one wonders why he didn't wait a few seconds just to see if Rasmussen blundered.

Then again, suppose it was 61...Ke6? Posters on the English Chess Forum have suggested that the source of the error(if error it be) is that the players, quite properly, put their kings on centre squares after the game, to demonstrate that the game had been drawn, and that this caused the technology to record the final move as ...Ke5. Maybe, maybe. But if the king went to e6 first, before the draw was agreed, why wasn't that move recorded instead? There must surely have been sufficient time, between the verbal agreement and the arrangement of the kings mutually in the centre, for the technology to record the move? Or did it in fact record the move, but then change its mind, because the next piece movement it detected was of the same piece that had last moved, so that its programming told it that the king had gone to e5 instead?

You don't know - so you have to check. You have to go through the moves anyway, just to see what really happened,. Because if you don't then there may well be lots of errors (and according to Mark Crowther there are many errors) which will plague databases and their users for many years to come. "Labour-saving technology"? Not necessarily. Not as such. Somebody will always have to plough through the scoresheets, just as was always the case, to find out what really happened.

Whether there are a host of inexplicable ...Ke5s coming out of Dresden, I don't know. I do know that a lot of odd moves are being displayed, that moves are displayed and then, as it were, taken back, and that a lot of players are shown as being out of time when they are not: and sometimes it takes forever to tell us the result of the game.

Such was the case with the Korchnoi-Richard Jones game in the tragic Switzerland-Wales match on Thursday, when the Welsh should have beaten a side outgrading them by about three hundred points a board but let it slip right at the end. Korchnoi-Jones was the first game to finish, but the last to have its result recorded: and in the meantime, this viewer was left with the clue from the earlier Jones-Rasmussen game to try and explain why, for more than an hour, the online board recorded a final move of 54.Rc4. even so - what was that all about? It's not quite a centre square, and the rook isn't quite a king! 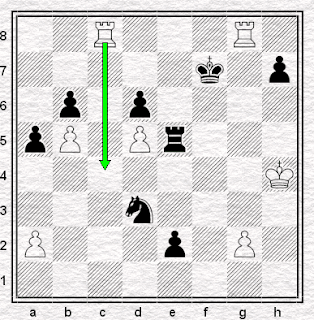 Isn't it most likely that Black didn't play either Ke6 or Ke5 because Gawain offered the draw?

Yes - but as I say, if that's so it might have been an idea to wait with the draw offer, just in case...