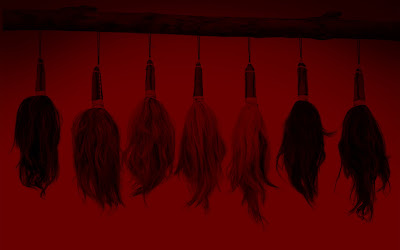 I beg your indulgence to brag a little dear readers but a couple of weeks ago I beat a guy who is higher rated than any other chess player I've ever beaten before. 167 ECF was the fellow's grade which, if my calculations are correct, works out to be a little shy of 2100 elo under the new conversion system. That's a good 30+ ECF points or about 160 elo points higher rated than myself at the time the game was played.

I mention this because I was playing Black at the time and just after I notched up this result I read on one of the Red Hot Pawn discussion boards of somebody else who'd also recently scored his best ever win and he also had been Black. I perhaps wouldn't have thought any more about it but yesterday, flicking once again through Jacob Aagaard's Excelling at Chess, I stumbled upon the following passage,

" ... after Karpov had been announced world champion when Fischer decided not to defend the title, Andersson was the first player to beat the new king (and with Black)"

and while n=3 is not much of a data set I began to wonder if a pattern might be emerging.

So now I have a few questions...

1. Why would it be that beating players much higher rated than ourselves happens more often when we have the Black pieces than might be expected?

Could it be that,

1a.
we spend more time working on our Black openings than we do our White?
(as suggested by GreenPawn on RHP)

1b.
our opponents try harder to beat us when they have White - and thus are more likely to take risks/make mistakes.
(as suggested by me)

1c.
some other factor is at work?

1d.
a combination of all/some of the above reveals the truth?

2. Am I deluded and the real truth is that these results are simply not representative of most chess players' experience?
Posted by Jonathan B at 8:44 am

167 ECF was the fellow's grade which, if my calculations are correct, works out to be a little shy of 2100 elo under the new conversion system

I'm a little sceptical about this: certainly with the new, higher ECF grades. Then again it's possible that an English 2100 may be a bit different to a Spanish 2100, which is not the idea but may be the reality.

On the major point: I don't think that 1a can be right (at least, in the sense of having an effect on results) unless it's shown that club players score relatively better with black than white than do, professionals.

I offer the answer Nigel Short once gave me: namely, that at club level, Black works with a narrow range of options to White's first move, defining the opening at the same time. So, for example, where White must be at least partly prepared for any response to 1. e4, Black will likely be better prepared in (his) preferred reply - say, c5 not e6; and thereafter, e6 or Nc6, not d6 etc. In this way, Black often engineers line of play familiar to (him) but less so to White. Hence, playing Black at the amateur level is relatively easier, he argues. Fits my experience too when I think about it.

The strongest player I've beaten so far this season, I beat with myself playing the white pieces. Same last season, same the season before that.

I often beat myself using the white pieces....

Over the past couple of years I've had two wins and three draws against titled players in various non-serious forms of chess (one simul, four blitz). Now you come to mention it, I was black in every game.

Which reminds me . . . players who do better with black should base their white repertoire around losing a tempo in the opening. Eg if you are a French and QGD player, go 1.d3 followed by 2.e3 and 3.d4.

That strikes me as probably the worst advice I've seen this month.

But of course, one should take advice that one doesn't want to take :D

My opinion is that one of the best forms of training that a player should entertain, (not that i've ever got as far as trying it out) is practising with colours reversed. I'm amazed that more isn't made of the psychology of the colours in various training books. In a game where pattern recognition and intuition plays such a great part, i think such a method has the potential for great benefit. I think the psychology of the colours often has a far greater outcome on the end result than the half tempo advantage that white has.

I haven't read it, but i think the case might have been put in some form in Rowson's 'Chess for Zebras'.

On topic i think, if the thesis is justified of which i am doubtful, then the answer is a combination of 1b, and a reduced sense of danger.

Strong players don't expect to have to do much more than just move the pieces to win when having white against a significantly weaker player, and that can cause problems. (they also might be more likely to use the occasion to experiment with lines that they don't know very well).

DAVID:
"playing Black at the amateur level is relatively easier, he argues. Fits my experience too when I think about it."

OK, I'm sure there's something in this. Nut I'm not talking about playing Black in general here but the possility that our BEST results (in terms of highest rated player beaten) might more likely come with Black than White.

EJH:
I fully take your point about the new conversion system. It feels excessively generous to me. Certainly I don't feel 1900+ which the new calculations say I am.

As for playing your Black repetoire a move ahead with White ... this is what CJS Purdy recommended.

I'm sure this is true to a degree: there's a heightened sense of entitlement and a reduced sense of danger.

It may not be enough to wipe out the advantage of having the white pieces, though it may reduce it.

I should say that I'm personally much more comfortable with the black pieces: in more or less any situation I'd rather have Black than White. I suspect though that this wouldn't actually mean that my results were better with Black. I wonder, if, indeed, all this isn't just a result of overestimating white's initial advantage: perhaps we think "White should win" and feel that we've failed when we don't, or feel we've prevailed against the odds when we win with Black. But it's only 56%-44%: maybe we actualy achieve 44% with Black, but we feel good about it because we're expecting to lose?

There's a similar syndrome in the way we expect to beat somebody 10 ECF points below us and experience disappointment when we don't. Well OK, but we're only actually expected to score 60% against them, not 90%!

And why did I thionk Tom's advice so bad?

1) I'm not sure that it's not addressing a non-existent problem.

2) It's evading a real problem rather than addressing it. If you're not happy with what you're doing as White, you need to work on that, rather than wasting the White advantage instead. Of course you may always feel more comfortable as Black, but to chuck away a tempo a a result is no better than the player who decides he or she doesn't like tactics and thus will almost never offer a sacrifice or accept one. It just cripples their play and takes a huge chunk off their potential strength.

It's one thing recognising that you're better in some areas than others and making allowance for that: quite another, making a fetish of it.

3) Unless you can also induce the Black player to play as if they were White, what have you actually gained anyway?

Hmmm. My experience of wins against grandmasters is evidence against the theory here (of those six wins, five have come with white); my experience at Barnstaple Chess Club is evidence for it (my only loss in an internal club game was with white).

Well I wouldn't, but I think we'd have to crunch a lot of numbers before we knew whether we were dealing with anything real. Perhaps over Xmas I shall look at my last 300 games statistically (or perhaps I won't).

I think I have six wins against FIDE Masters, but I'm not sure I can remember them all off the top of my head...

I would guess that you do not play
167 grades very often and that if you did your grade would be about
167, if not higher.

Until recently all my best results had been on the white side of the Morra gambit. Then I played the reverse Morra against the English and beat a 190!

I also don't mind playing black as I have my own pet lines with it. If I play e4 there are so many more potential defences to contend with. I'm not sure I get better results with black though.
Better results with black might only apply to relatively lower level players, which would discount Jack Rudd.
Jonathan- as you are my board 1 this season - I'll have to engineer losing the toss so you can have the black pieces.

Larsen in How to Open a Chess Game said "For strange psychological reasons people are more careless with White than with Black." He gives Keres in the 1959 Candidates as an example and said it was not better black opening preparation but excess white optimism. Although not about playing *higher* grades, it does show that the highest grades are susceptible. Larsen also had numerous comments about reversed openings. Highly recommended reading even though published in 1974. In fact the whole book is pretty good but Larsen's chapter remains my favorite.

For myself one breakthrough came when I analyzed my results by color by opening [this was ten years on]. The statistics were pretty dramatic, for this discussion there was one relevant point: Before my analysis I was struggling to find an opening that would give winning chances for black against a weaker opponent who opened 1.d4. Those 1.d4 results were so bad (1.e4 was a different story) that I concluded if I just drew every such game I would be marginally better off. ... Naturally once I started playing to equalize my results went way up!!

I used to engineer losing the toss all the time when I was captaining Somerset. Or rather, I used to pick black on odds when I won it.