I Can't Lose From Here (again)

...this is a psychological error common to chessplayers of all ranks from beginner to grandmaster: to lose one's objectivity is almost always to lose the game as well. 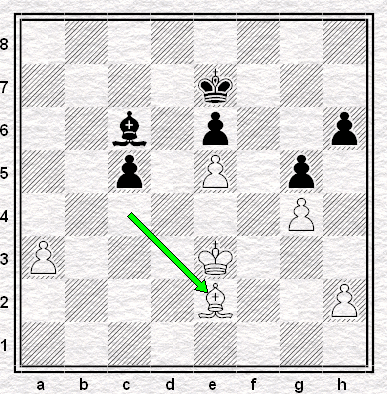 I posted a couple of months ago on I Can't Lose From Here Syndrome and this past weekend saw a fresh and very instructive example. To understand exactly how instructive, I'll give you some background: but we'll start with a position just before the diagram above. It's the game as it stood after White's 43.Kd2-e3. 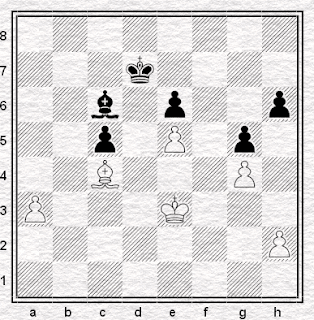 In this position I am fairly sure that Black was considering 43...Bd5, with the idea that he would win the pawn ending if I exchanged bishops. However, he presumably realised that the opposite is in fact the case: although Black's two pawns are connected, the fact that White's are further apart would actually win the game even though the e-pawn can easily be had.

Having realised this, Black should understand that he cannot win. He doesn't have to accept the draw immediately, since White cannot win either, not without Black's help. But he needs to look at the position objectively and realise that he has no means of improving his position. Unfortunately, however - though fortunately for me - he was not looking at the position objectively.

Black, I should say, was a junior. This doesn't mean that many, indeed most adult, experienced players don't make the same mistake - at one time or another everybody does, as Bronstein observes above. I mention it only because it was pertinent to the course of the game up to here.

We were both on 3/4, despite there being a gap of more than 450 rating points between us. Black is clearly improving very rapidly indeed: possessing a grade of 1673, he had opened up with two draws against players of mid-1900 strength before beating two more of high-1800 level. I therefore took the view that he was likely to be tactically sharp, quite likely sharper than me and therefore I would have to use my far greater opening experience to try and obtain a sizeable advantage before I ruined it with an inevitable tactical oversight. Which is exactly what happened. With my far greater opening experience I obtained a sizeable advantage - and then ruined it with an inevitable tactical oversight. 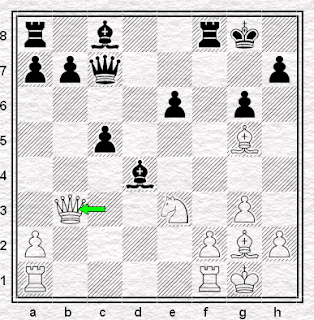 I might have resigned immediately on understanding the strength of Black's reply. But as I had a little play still left I thought I'd see if he let me back into the game and as it happened, he did: indeed, within four or five moves, although I am probably still lost with best play, I reckoned I could probably hold the draw. By move 30 I was (and am) sure that Black's winning chances were gone and it was just a case of showing enough care not to throw the game away.

By the time we reached the first diagram, then, I was expecting him to concede the draw, since presumably he had realised that his only winning attempt would lose. What surprised me a little was that he rejected the draw immediately: no sooner had I spoken than he had shaken his head. And this told me that he hadn't accepted, not fully, the real situation on the chessboard and that his head was still where it had been more than a dozen moves before, trying to consolidate a win against a player rated much higher than he. He was not, actually, playing the same game that existed on the chessboard in front of him.

All right, you may say, but why should he not still be fighting, trying to win the game? After all, it didn't end in a draw. No reason at all, I reply: but it was the immediacy, the refusal even to countenance the draw, that gave the game away.

He played 44...Kd8 after I offered the draw and after my reply, 45.Bc4, he had another think about losing the game by trying to exchange the bishops on d5, using up most of his time in considering it. He then tried to march his king round to attack my a-pawn - not lethal in itself, but dangerous, giving him losing chances he didn't realise he'd had. Play continued 45...Bd7 46.Bb3 Kc7 47.Kd3 Kb6 48.a4 and in the position below, finally realising that he had no way in, he offered a draw. 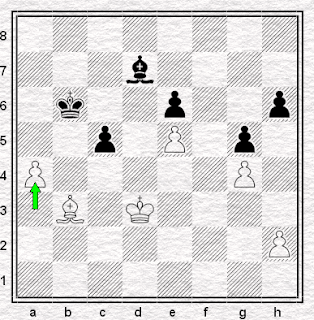 By this stage, he was in a lot of unanticipated and unnoticed danger: he now understood that I'd kept him out, but he still hadn't realised that he had not necessarily kept me out. I think this may be why he offered a draw before making his move: not because he was unaware of the rule, but because he just thought it was a simple draw. I knew it wasn't: not unless he played 48...Bc8, in which case I'd have accepted. "Tienes que jugar" ("you have to play") I said, recording his offer on my scoresheet and waiting.

I wonder if the simple fact that I didn't accept unnerved him further. Anyway, by this stage I think I'd have been disappointed if he hadn't played 48...Ka5??. I certainly expected him to, he obliged, and I played 49.Kc4 Kb6 50.a5+ which wins. As outside passed pawns are wont to do. 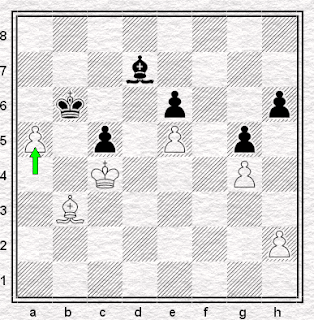 There's a moral to this story - it's at the top of the piece. But there are other ways of putting it, and one of them is this:

You'll lose less often if you remember, more often, that you can lose.

I just can't believe a post that clearly took a long time to put together has no comments at all, so here is one - thank you for this interesting post!!