What happened next VI 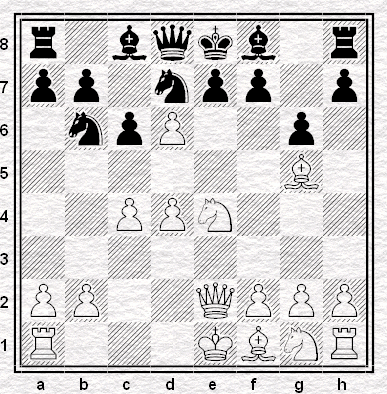 White won with 10.Nxd6 mate. This, despite the fact that the pawn he was taking on d6 was his own. 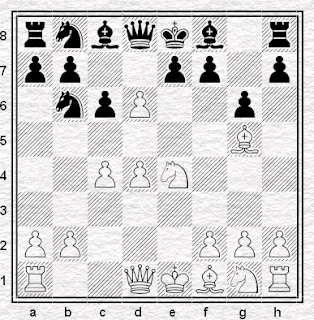 Our narration is from issue #29 of Cowley Chess Club's review, The Chequered Board.

Marco [i.e. Zhang, player of the White pieces - ejh] had recently played a quick game where his opponent walked into a smothered mate and so, spotting a similar pattern, he played 9.Qe2! threatening 10.Nf6#. Black defended this with 9...N8d7 [reaching our initial diagram - ejh] but this blocks the flight square on d7 so 10.Nxd6!# - forgetting that, unusually, the pawn on d6 is a white one - a twenty-first century chessboard classic.

The incident was a complete brainstorm: no subterfuge was intended and neither player realised what had happened until later. (White, for his part, thought when playing through the game that he must have missed some moves off his scoresheet before he realised what he'd done.)

The game is reproduced below. Sort of.


(Thanks to Sean Terry and Marco Zhang for their help.)

Hi Ejh. Slightly off topic but maybe you could help me with some confusion. There's a Sean Elliott
playing in this match, but there's no Sean Elliott listed as having a grade anytime since 1994. There is however a Shaun Elliott from Didcot listed. Are these the same person? And is one/both of these the person who won the British U18 1985?

I wouldn't know - are there any Oxfordshire readers who can help?

Reckon we're talking about the same chap here - Sean used to play for Witney but when I played him last May it was as a Didcot player...

Does anybody remember Union Jack Jackson? I think there was a character in that - UJJ's best mate - called Sean O'Bannion?

Thanks for the info. The confusion comes partly from the Sean/Shaun thing. As a junior I'm sure he was Sean. Also after having not seen him for many years I saw the name S.Elliott at the 4NCL c2000 and was going to speak to him, but when I saw him I thought it wasn't him.

Meanwhile, if you go to the Africa page on the BBC news site, you will, for a while at least, actually see some chess...

Sean - thanks very much!