Not Quite The Worst Move On The Board

Or, 'That's it! I'm quitting chess forever, and this time I mean it!'

'I love all positions. Give me a difficult positional game, I will play it. Give me a bad position, I will defend it. Openings, endgames, complicated positions, dull draws, I love them and I will do my very best. But totally won positions, I cannot stand them.'
- Jan Hein Donner 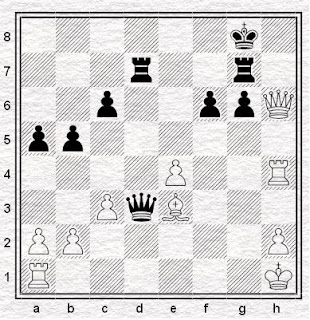 Playing black in the above position is Sam Osborne, current British u-16s champion. A whole bishop down with just two minutes left on his clock (compared to white's twenty), Osborne managed to win within five moves. Needless to say, his opponent was the present writer. 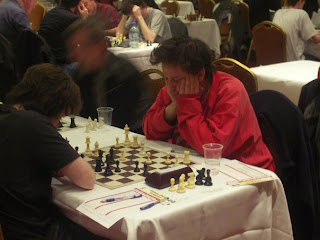 Uncharacterstically, I chose to play on.

My inner menace was in the mood for bluff, so to keep the position as stressful as I could I sacrificed a pawn for absolutely no compensation whatsoever:

16.f4 exf4 17.gxf4 Bxf4 18.Qf3 Bb8 19.Nfg4 Nxg4 20.Nxg4 Ne5 21.Nxe5 Bxe5 22.Qh5 Qc7 23.Rg1 Kh7 24.Bg5 Rd3 25.Bf1 Rd7 26.Be2 Rg8 27.Bg4 Bxg4 28.Rxg4 Qd6 29.Be3 Qd3?? 30.Qxe5 g6 31.Qf4 Rg7 32.Qxh6+ Kg8 33.Rh4 f6
And so we reach the diagram. What followed is, strictly speaking, a long way from being the worst move on the board. I could let myself get mated instantly via 34.Bg1, for example, or drop my queen in all manner of amusing and implausible ways. But the game's actual gaffe, the undramatic 34.Qf4?? belongs on these pages for several reasons. For one thing it is therapeutic for myself to air dirty laundry in public, to stand atop a high rise building and shout 'I'm shit at chess!' However, today's post is more of a warning siren against complacency. 34.Qf4 doesn't lead to mate, nor does it leave a queen en prise, but this somehow makes it worse: it's a nothing move, a move that suggests that simply anything can win in the position when in truth this is hubris of the ghastliest kind. From a nice scalp against a British champion to humiliation and self-loathing in a matter of seconds. And so for those of you who still wish to make something of chess, the moral of the story of this: do always stay until the end credits, won't you?
Posted by Morgan Daniels at 10:51 am

....and the points go to anday and frankaaaaayy!