What happened next V 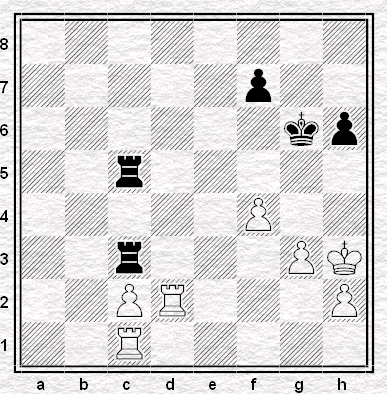 Yesterday's position comes from the game Dahlin-Richardson, Sweden v England, Student Team Olympiad, Krakow, 1964, mentioned in the comments of our previous post about How To Cheat At Chess.

The diagram is the position at adjournment: White, two pawns ahead and winning, sealed 44.Kh4. This, to put it mildly, is not quite the strongest move available - as White shortly realised. But now the move was written, sealed and in the hands of the arbiter - what could he do?

The story is taken up by Andrew Walker:

A bit later, Dahlin sees Keith in the bar:

"Why don't you resign, it's an easy win, look" (plays [the] second best move, and flashes out winning line).

Keith, somewhat naively, and relieved that Dahlin hasn't sealed the best move: "But that doesn't win, it's a book draw!"

Dahlin: "Shucks. But surely this wins?" (goes back a couple of moves and tries again)

Keith: (more skittles, showing that he can draw).

Finally, the Swedish player gave up in disgust, grumbled how lucky Keith was that he hadn't sealed the best move (which indeed won easily) and offered a draw. Keith accepted, before his opponent could change his mind and find a winning plan. When they went to the arbiter to confirm the result the envelope was unsealed...

...at which point Keith discovered that not the "second best" move, but the blunder mentioned above had actually been sealed. Allowing mate in two with 44...Rh5+ 45.Kg4 f5 mate.

[What happened next? index]

Pretty good acting there but you should always be on your guard at adjournment time. A teammate once had a lost game but his oppo didn't contact him for months. He then said he was too busy and offered a draw. Upon accepting, the sealed move was opened to reveal a losing blunder. A few weeks ago I adjourned in a dodgy position which I assumed was hopeless against reasonably accurate play. I was very surprised to hear of a "package double draw" with another game. That game my captain was pressing for a win, although his oppo could hold with accurate play. We then considered the possibility my oppo had blundered. It was actually his 23rd best move that gave me the advantage (the 22nd best move was still good for him!). The 23rd best moves onwards were just stupid blunders. We concluded that he may have played a move that gave him a +0.9 Fritz advantage. My captain after some thought agreed to the package (I owe him some beer!). The sealed move....? Well it was the third best in the position, with a Fritz +2.0 advantage. Just shows that you don't always get people trying to sneak out a result!
Slightly unrelated, I was once talking to a 200 player who hated adjournments. His team would win the league if he won his adjournment which was indeed winning for him. What happened? He offered his oppo a draw on the condition that he told his captain they played on! What a team player.
I myself once turned down a draw on adjournment that would have almost certainly won Watford the league. In my defence, my oppos position was awful, with my pawn hemming his bishop in to make me effectively a piece up. I won the resumption, but it was one of the most tense games I have ever played.
Andrew
Andrew