The practice of his art involved a lot of staring at individual things within the landscape, or in London, or in his rooms.......The things are separated from their place, yet linked to them. They sit in his pictures like chessmen on a board, where they need each other to make sense, yet are distinct.

Or so it says in an essay here: 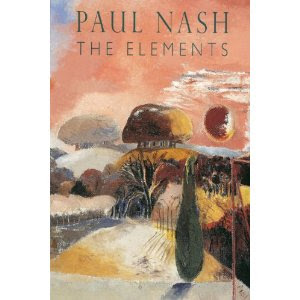 Paul Nash (1889-1946)
(part of) Landscape of the Vernal Equinox (1943),
as cover design for "Paul Nash; The Elements."
which is the catalogue for an exhibition in Dulwich. It has this captioned comment, by the same author presumably:


The things are separated from their place, yet linked to them. They sit in his pictures like chessmen on a board, where they need each other to make sense. They become protagonists in a visual drama, and Nash learnt to notice objects that would be useful to him when made to perform a role.

And you'll find that here: 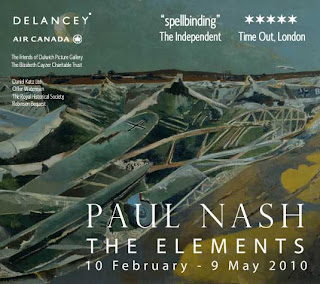 This picture, also in the exhibition, might be a good place to start: 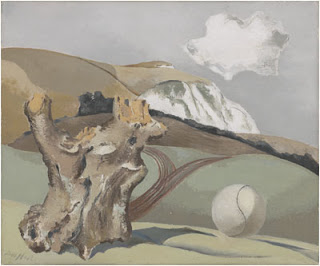 Event on the Downs (1934)
Nash has placed some "individual things" so as to sit uncomfortably in a familiar landscape: downland above cliffs (actually Ballard's Head, Dorset; but it could be any number of places on the south coast). The torso-like tree trunk is odd. It isn't rooted in the ground, and yet hasn't toppled over; but otherwise it is plausible, if unusual. An out-of-scale tennis ball has just burst on the scene, as if erupting from a Rift in the Space-Time Continuum, and it places itself with precision, its seam rhyming with the receding track. The two objects confront each other and, like ourselves, scratch their heads and try to make sense of their situation (and gnash, in frustration?). That cloud seems to have something to say, as well.

This unlikely conjunction only bears meaning, if meaning it does, because they are all there together. Take away the ball, for example, and you have black pieces without the white. It is the juxtaposition that creates the tension, asks the questions, and demands answers. Remove all the bits and the scene would be just empty, barren, inert; a non-event; like a board without pieces. As to their significance? Possibly all or any of the following: dynamism versus stasis, play and decay, Eros/Thanatos, life/death. The cloud is the departing spirit, as some commentators, and Nash, have suggested. All played out on the rolling chalk.

So, seaside Surrealism (as Nash's biographers have put it) meets rural Romanticism, up on the downs. Strange, but no more strange, perhaps, than the game of chess itself. Possibly. And if you were wondering why this could be a Postscript, please could you come back for the next instalment. No, definitely.

Acknowledgements, etc.:
The Exhibition is at the Dulwich Picture Gallery.

The author of the chess analogy is David Fraser Jenkins in his essay, with the same title, in Paul Nash: The Elements (2010) Scala Publishers Ltd.

Not sure I fully buy the analogy with chess, but I like the pictures.