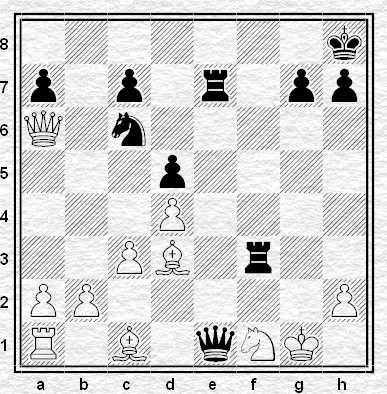 Before falling out after Baguio, Raymondo and Michael Stean had been big mates.

In the October 1976 edition of the BCM Stean writes of a game he had recently played against Bela Toth. In the diagram position he wanted, he said, to play 23 Be3 but was put off by the continuation 23 ... Rxf1+, 24 Bxf1 Qxe3+. After a bit of a think he chose 23 Bg5 instead and the game was drawn seventeen moves later after many adventures*.

On his return to England Stean showed the game to Keene who, quickly spotting something his friend had missed, demonstrated that 23 Be3 wins after all. Even when it wasn't his own game Raymond Dennis Keene could play.

* although Fritz tells me that after 23 Bg5 Black can force an immediate draw. It's got nothing to do with Keene but it's quite pretty so you might want to have a look for it anyway.
Posted by Jonathan B at 8:00 am

I'll look it up ... hopefully it's in my notes somewhere!