The last Postscript, and the one before, left this question in the air: why, late in life in 1987, did artist Eileen Agar, creator of at least two chess related works, choose that particular theme to pay her respects to Surrealists Magritte, Dali et al.? Well, if the premise is correct, I reckon the answer is possibly quite straightfoward. First, her soul mate, long time partner, and husband since 1940, was Hungarian Joseph Bard (1889-1975), who was, yes, a poet; and also the model for the Angel of Anarchy. 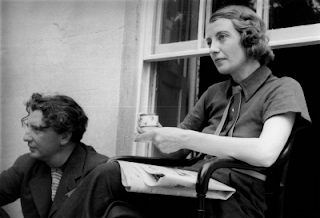 Second, in 1941 he wrote a short story "The Game of Chess", broadcast by the BBC in 1959. My hunch is that her chess piece of 1987 was a coded hommage to him as much to the other big beasts of Surrealism. In her autobiography she reminisced thus about the plot:

"In the broadcast, the inimitable Patricia Hayes took the part of the small boy in Belgrade who plays chess with the colonel who is about to murder King Alexander and his Queen that night. The boy wins. In a voice of unfeigned simplicity, he comments that nobody who hates his king will ever make a good chess player".

Which is rather simple chess, but hardly, the colonel might have replied, a conclusive argument against a republic.

Now that we have settled that, it is time to speak of Roland, the main man of Surrealism in England, responsible for unleashing it, red in tooth and claw, on an unsuspecting domestic arterati at the First International Surrealist Exhibition, which he organised in London in 1936 (the one where Dali tried to give a lecture clad in a diving suit, nearly suffocating when the helmet jammed, but not quite - shame, it would have spared us his later ravings).

You'll recognise the name: Penrose, Roland Penrose, son of James (portrait painter), brother of Lionel (geneticist), uncle of Roger (mathematician), Oliver (mathematician), Shirley (geneticist), and of Jonathan (psychologist and chess player). Quite a dynasty, stacking up the family IQ points down the generations as if trying to solve the nature/nuture problem single-handed.

Photos of Jonathan, our Tal-slaying hero, are hard to come by on the web, but one shows Bobby Fischer taking on this particular string from the Penrose gene pool. 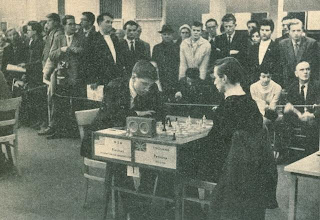 It's not the best shot of Jonathan I'm afraid, and the camera angle makes it difficult to see any family resemblance in this self-portrait by Uncle Roland: 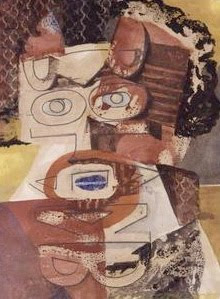 Though I think there is something about the ears.

Like Eileen Agar, Roland Penrose had a soft spot for collages and you can see many of them, together with other works of his, and a cornucopia of international surreal delights, at his house Farley Farm in Sussex. It is still lived in by the family and you can visit for a fascinating conducted tour. It is a marvellous living museum of friendly Surrealism, where, if you crave something chessic you can see, in the flesh, an aluminium and wood edition of the Man Ray chess set (he was an early lover of Lee Miller, who was later Penrose's wife and mother of Antony Penrose, who will welcome you, rather more in the flesh, to the farm).

Eileen Agar's autobiography was detailed in the previous post.

Farley Farm is celebrated in Antony Penrose (2001) The Home of the Surrealists - Lee Miller, Roland Penrose and their circle at Farley Farm. Pub. Francis Lincoln Ltd., London. On pages 92 and 93 there are photos of the Man Ray chess set, 1946 version, sitting on the sideboard . He also wrote a biography of his father (2001) Roland Penrose - the friendly Surrealist. Pub. Prestel, London.