Now, please try and read this quote without a trace of irony:

"As beautiful as the chance meeting on a dissecting table of a sewing machine and an umbrella."

It is the flamboyant rallying call of continental Surrealism, penned in 1868 in fact. It makes Paul Nash's chance meeting in a field of a tennis ball and a dead tree (discussed in the first instalment of this post) look very English: Centre Court meets Chelsea Flower Show; as surreal as a cream tea. 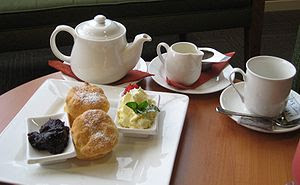 A chance meeting on a tea tray of cream, scones, and raspberry jam.

Marvellous (a term of high praise in Surrealist circles).

Between the Wars Nash came within the orbit of one of the GMs of Surrealism, German born Max Ernst, who was in England in the 1930s, and who provides the rather thin pretext for this Postscript to Chess in Art XIII; and while we are about it, to this one as well.

They had many mutual friends, including artist Eileen Agar (1904-1991) who had been co-opted as a Surrealist at about the same time. She played mixed doubles in 1936/7 or thereabouts with Nash, and she produced a piece with the handle "The Angel of Anarchy", some fifty years before Malcolm McLaren and Viv assumed the mantle. 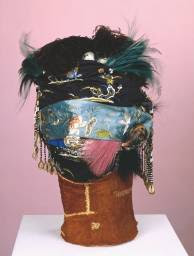 Eileen produced two other works of interest to this blog. One, made around the time she met Nash, was an object/construction which possibly had something to do with chess, and definitely, given the title "Mate in two moods", other things besides. It featured a truncated and refashioned chess board with various "things" standing for pieces, including a sunfish (dead) leaning against a wall to play with its shadow, or so says Michel Levy (1999). Without being able to locate a postable version, Fish Circus (1939) will have to do instead. It has pleasing Nasher seaside references, and check motifs to appeal to the complete chess addict. 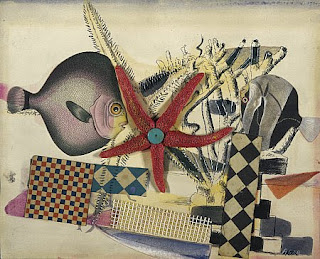 The check business, on the right representing/alluding to a clown or harlequin's costume, possibly, crops up a lot in non-figurative chess-themed artwork, but that's a topic for another occasion. Here it helps evoke the distinctive features and aura of the circus, its genius loci, just as did Nash, as a rural Romantic, with Ballard's Down, Wittenham Clumps, Romney Marsh and other sites of special ecstatic interest. Agar gives her circus a cast of performing fish (real and painted). She is possibly trying to do a similar thing to Nash and capture the spirit of the plaice.

The collective fun and games of this party of British Surrealists, leavened by divers waifs and strays from abroad, was cut short by World War Two after which Agar continued to plough her distinctive and sometimes overlooked furrow into sprightly old age. In her eighties she could still turn a head, both by modelling clothes for the mature lady (snapped by Snowdon, no less), and making collages such as this: 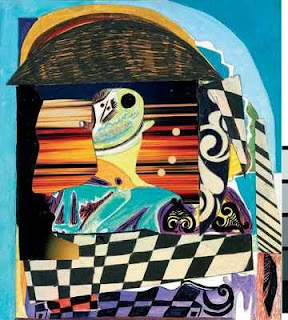 The Game of Chess (1987) Redfern Gallery

A board has some rook-like symbols in the bottom corners and more bits at the top (maybe with a Picasso touch). Our opponent is a bowler-hatted René Magritte silhouette who characteristically has his back to us, preferring to watch a Martian sunset. There could be a play with profiles on the left: is that Dali with his wispy moustache looking out, with a topless lady looking in, forming his nose and chin? If so, who could she be?.....difficult to say as many of the Surrealist ladies were inclined to liberated behaviour, sometimes provoking apoplectic jealously among their men-folk who thought it their preserve. Fun and games, as ever. And in the struggle of shapes and edges will the straights succumb to the curlicues; will the the infernal reds see off the icy blues? It may possibly be chess, but definitely not as we know it.

So this collage, produced in her 83rd year, appears to be Eileen Agar's surrealist retrospect, created by one who saw them all. But why did she hang this hommage on a game of chess? Perhaps we'll see next time. 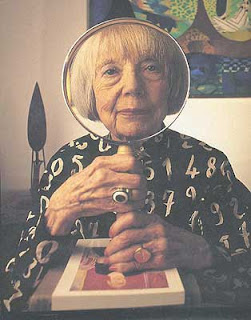 Agar produced a first version of the Angel in 1937, it was lost and the second version, illustrated, was made in 1940-3.

Two books in particular have informed this post: Eileen Agar (1988) A Look at My Life (Methuen, London); and Michel Remy (1999) Surrealism in Britain (Ashgate, London).

That black shirt with white numbers is probably the most tasteless item of clothing I've ever seen.