When we were Kings VII

[JB's Note:
Today I have another article that I originally wrote at the start of the year but which never got published. As on Wednesday, I thought it was time to have another look at what I wrote in January in the light of the Anand-Topalov World Championship match currently underway in Sofia.

... can you compare any of the media coverage of the world chess championship games favourably to the coverage of any other sports?

asked Adam Raoof over on the EC Forum on yesterday morning and a very reasonable question it is too. Only the day before Chessbase had published an article contrasting the print media’s coverage of Anand-Topalov in India with that in the rest of the world only the day before. Outside of Vishy's homeland, they said, news from Sofia usually amounts to

... just an inch or two at the bottom in the sports section

If only the coverage in Britain was that good! To be fair there was a piece in the Telegraph the day before battle commenced - I’m indebted to Roger de Coverly, also from the EC Forum, for the link – and that was certainly better than nothing but the fact that the journo concerned was writing from Warsaw and unable to distinguish between a tournament and a match, or between a match and a game for that matter, tells you something about the quality of the article.

In the comments box to T.C’s pre-match article Contemporary Chess is Brilliant, George suggests that there would be more news coverage if Carlsen was playing. Well that’s very probably true, I suspect the ‘young pretender’ angle would be a narrative that the press would find quite appealing, but I doubt that even Magic Magnus’ presence would make that much difference. After all he was playing at the Chess Classic in London last December and that didn’t lead to a huge amount of coverage.

Perhaps you’re wondering, ‘Are you really surprised that the World Championship isn’t receiving wall-to-wall coverage? What do you expect? Chess has never exactly been front page news has it?’ Well, since you have been kind enough to allow me to ask those questions on your behalf, dear reader, allow me to respond …

On the 16th December 2009 something rather extraordinary appeared on the front page of The Independent newspaper. There, right next to articles about Arnold Schwarzenegger being the man to save the world from global warming and Sir John Scarlett being the man to lie to the Iraq inquiry sat thirteen remarkable words,

and a colour photograph of a Black king lying prostrate before a White queen.

Amazing don't you think? Chess. On the front page of a national newspaper. In 2009!

(b) more than a bit of a shame

because it was conducted at the strongest chess tournament to be held in Britain for at least a quarter of a century and yet the London Chess Classic gets no mention whatsoever save for Korchnoi's presence in town being explained as the result of him being a guest at the event.

Still, we take what we can get don't we? Chess in any form on a front page is a real achievement for the Classic in general and organiser Malcolm Pein in particular isn't it? That's true I think but when Korchnoi left London to fly off to Elista for a replay of his 1977/78 match with Boris Spassky (mentioned on these pages more than once before) it rather underlined how much times have changed. 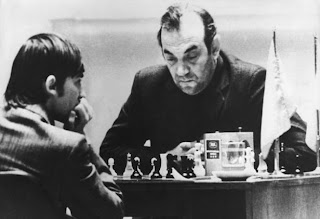 photo from the Indy

Back in the day chess graced the front pages of our newspapers far more frequently than the Halley's Comets we have come to expect today. Between 12th December 1977 and 14th January 1978 the Korchnoi-Spassky Candidates Final alone generated half a dozen front page articles in The Times. True they were often short or inspired by what was happening off the board as much as on it but nonetheless they were there.

Incredibly The Times devoted a full 280 first page words to the news that the match had finally been won and then followed up with another 470 from Golombek inside. That's completely unthinkable today but Korchnoi - Spassky was the cold war writ small (it's no accident that two days after the match was over a story documenting Korchnoi's campaign for this family to be allowed to leave the Soviet Union appeared on The Times' front page) and chess was mainstream back then, part of the East - West narrative by which we, or at least the newspapers, lived.

So yes, let's celebrate any publicity our game gets but the next time somebody wants to tell us that the media ignores chess because it's inherently dull and was never popular anywhere except the former Soviet Union lets remind them that When we were Kings chess was front page news here too.

Chess: Korchnoi wins another game to take a 5-2 lead in his world championship semifinal match against Spassky 5

SPASSKY BLUNDERS
A blunder by Boris Spassky, former world chess champion, drew gasps of dismay from spectators in Belgrade and brought him another defeat at the hands of Viktor Korchnoi. Korchnoi now leads 6-2 in the match to decide who will play Anatoly Karpov for the world title. Page 6

KORCHNOI BACKS DOWN AND PLAYS ON
Korchnoi has backed down and resumed his game with Spassky in the world chess candidates’ match in Belgrade. Although the demands of his “ultimatum” have apparently not been met, he returned to his board yesterday after a personal appeal from the president of the International Chess Federation. Page 4

Spassky resigned the adjourned game after the first move today. With an angry wave of his hand, he strode out of the hall as soon as the referee disclosed the move, which he had sealed in an envelope when the game was adjourned yesterday.

He did not shake hands with Korchnoi or say one word to him. The defeat was doubly bitter for Spassky for he had spurned the offer of a draw from Korchnoi on the thirty-third move.

Once the offer was refused, Korchnoi went all out for the kill. Sacrificing pawns, he built up a powerful attack against his opponent’s king.

The icy finale reflected the extent to which the match, billed as a test of two brilliant but dissimilar players, had degenerated into bitter psychological warfare.

Spassky’s resignation gave Korchnoi victory by 10.5 points to 7.5 in the best of 20-game series. Korchnoi won seven games, Spassky four, with seven drawn. Korchnoi who is 46, will meet Karpov, aged 26, later this year at a location still to be decided.

Korchnoi looks on his meeting with Karpov as a grudge match – for it was his semi-final loss to Karpov in 1974 that led to his defection to the West leaving a wife and son in Leningrad. – Reuter and UPI.
Harry Golombek comments and moves, page 16

Belgrade: Viktor Korchnoi, challenger for the world chess championship, will press the Soviet authorities for the release of his family from Russia 5

* Curiously it appears on the web dated Tuesday 15th December