Contemporary Chess Is Brilliant
(and the world should know it)

On Friday Monday Saturday*, World Champion Vishy Anand will sit down opposite the world number two ranked player Veselin Topalov and their contest for the ultimate chess crown will begin: the World Championship. Chess players everywhere will follow the match obsessively, mostly via the internet. But what about non-specialists with a passing interest, or the just plain curious? They must rely on their usual media, and here in the UK the BBC tends to ignore all chess news unless it involves calamity or boxing. And although many of our newspapers have chess columns, even the World Championship is unlikely to catapult chess news out of its regular spot and on to the front pages where it belongs. Lest foreign readers think those regular spots hold a cosy prestige of their own, I’ll quickly mention The Telegraph, whose very good daily chess column is buried each day at the bottom of the newspaper’s Obituaries page.

But mainstream media should cover the World Chess Championship extensively and prominently, and for one very simple reason. Contemporary chess is brilliant, absolutely brilliant. Don’t believe me? Here are five reasons why contemporary chess should command the mainstream attention that it has yet to receive. 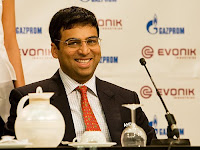 1. We know who the World Champion is. It’s Vishy Anand. He beat Vladimir Kramnik in a match, and Kramnik is the guy who previously beat Garry Kasparov in a match. There’s no dispute, no rows, no arguments about it. No corrupt institutions waiting in the wings with false crowns buffed up for their personal favourites. No paper titles handed out like the lesser belts in boxing. No Champions League where the quality of play is really the highest in the game. Not even the sideshow of a constructors championship. No confusion, no nothing. It’s Vishy. For now . . . 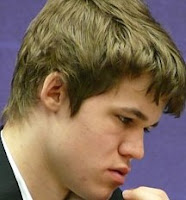 2. We know who the Rising Star is. It’s Magnus Carlsen of Norway. Still a teenager, tutored by Kasparov, touted by all as the one to watch. No-one disputes his talent or his achievements, so far. But will he become World Champion? There are question marks over his drive; he describes himself as not obsessed by chess. There are questions marks over how well prepared he is – how long can he rely on the secrets Kasparov has passed him? And one final question is whether he is the rising star at all, and not just the herald of the next generation of top players, fundamentally different from the current older crop of Vishy & Vladimir & Veselin and the rest. Why fundamentally different? Because Magnus is the first top player who grew up practicing against computers as strong as Grandmasters. But others are coming, and all of it is fascinating to watch; Mangus is still the rising star - but for how long? 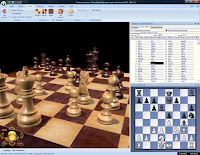 3. The internet. The internet could have been invented for the sake of chess, and vice versa. Curious about trying a new game? You can get a game of chess the minute the thought strikes you. Want advice? You can do anything from leave a message on a forum, to pay for the help of Grandmaster. Chess news, chess blogs, chess jokes, chess poetry, chess images, chess programming – it’s all a google search away. Chess porn even, or so Morgan tells me. And you can watch the World Championship (and indeed all top tournaments) live, in the company of thousands of others, listening to Grandmaster commentary, supplied with computer analysis, playing a friendly game on the side. 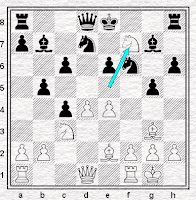 4. Chess itself is better than ever. At Arsenal in the 1980s, away fans used to sing "Boring, Boring Arsenal". Now the home fans sing it – ironically, because Arsenal now play beautiful, exciting, attacking football. Like Arsenal, chess has, I admit, gone through dreary phases. Lots of short, dull draws in long, dull tournaments. Lots of similar openings. The belief that dry, technical procedures were best, the styles of the top players suitably dour. Games without sacrifices, without excitement, almost without imagination. No risk, no fun. And, no more. Kasparov and the computers have put pay to that. Nowadays chess is a rough-and-tumble fighting game, a drama of violence, surprise and imagination. Top players head for unbalanced positions where they have the best chance of outwitting their opponents. Each player seeks to throw the game into chaos as early as possible; not for nothing was a recent book called "Fire On Board". Learn the rules, play a little, get used to the game – then have your mind blown by the stuff they get up to in top tier chess. I’m a seasoned player – and I still do. Daily, or almost.

5. Chess is teaming up. The right image for chess is no longer a school boy, lonely, bespeckled, bullied, sat in a classroom on a sunny day – facing him his mathematics teacher, whose broken dreams can barely be sensed on his expressionless face, in his bored, quiet sighs. Instead, chess players enter poker tournaments – and win. Sometimes. Female players – yes, they not only exist, but they have their own websites, and furthermore they often inject them with, let us say, a certain photographic glamour. Others try to link chess with the prevention of Alzheimer’s, or with learning about decision making, or with peace, or with social programmes in troubled areas. And with what next, who knows.

A vibrant and diverse church we have become. True, with the odd wacky element that teams chess up with boxing or visits from aliens. But far more than that. Contemporary chess is an exciting game, replete with intriguing leading players and an emerging new generation, branching out into the wider world and brilliantly served by the internet. Players, tell your friends. Journalists, tell your readers. Editors, it’s time for the mainstream media to catch up. You can start on Friday Monday Saturday*. It’s time for the world to know.

* - hopefully finally. Anand's travel plans have been affected by the volcanic ash grounding flights in Europe.
Posted by Tom Chivers at 10:01 am

Magnus is not the Rising Star,he is the 'Star' of the game and if he was playing for the World Championship there would be more media coverage, including probably the BBC.

Not necessarily in Bulgaria or India though.

What leads you to make that assessment of the BBC's propensity (or not) to cover chess with (or without) Carlsen?